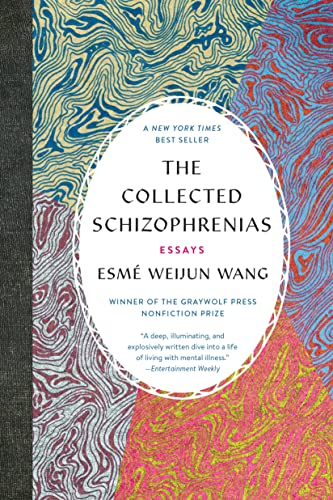 Schizophrenia lurks like a cultural bogeyman. It rises up and devours its victims, leaving only horror and madness, “not necessarily death nor suicide, but a ruinous cessation of existence.” In literature and television, schizophrenia is the ultimate curse of violent madness, horrifying but vanishingly rare. It’s a construction that casts a shadowy void. Schizophrenics exist in that void: terrified and terrifying, monsters without humanity.

Essayist Esmé Weijun Wang articulates the conflicts of her own experience of schizoaffective disorder, a psychiatric disorder on the “psychotic spectrum” which includes schizophrenia. At the heart of the discussion: how to articulate suffering while still centering her own humanity? Her mental illness is real, but in order to speak of it, she opens herself to an abjection that erases her intellect and value.

The Collected Schizophrenias takes on this struggle with accessible grace. The essays won the Graywolf Press Nonfiction Prize, the same award that launched Leslie Jamieson’s magnificent The Empathy Exams. Like Jamieson’s, Wang’s writing tackles social complexity through personal journeys, centering the author as a sympathetic, trustworthy narrator who leads the reader across uncertain and unstable ground.

“Diagnosis” explores the gap between diagnostic criteria and individual experiences. Wang’s affection for frameworks is both unexpected and utterly intelligible: “Some people dislike diagnoses, disagreeably calling them boxes and labels, but I’ve always found comfort in preexisting conditions; I like to know I’m not pioneering an inexplicable experience.”

Her willingness to accept categorization, though, doesn’t necessarily simplify the psychiatric process. Her own psychiatrist hesitates to name Wang’s disorder: “I believe she was wary of officially shifting me from the more common terrain of mood and anxiety disorders to the wilds of the schizophrenias, which would subject me to . . . stigma from others—including those with access to my diagnostic chart.”

“High-Functioning” explores how Wang uses her own cultural capital to battle medical stigma. Her Ivy League education and experience in in the fashion industry both reinforce her value: She is exquisitely educated, impeccably presented, and eloquent: “With these signifiers, I am trying to say that I am a wife, I am a good patient, I am an entrepreneur. I am also schizoaffective, living with schizoaffective disorder, living with mental illness, living with mental health challenges, crazy, insane—but I am just like you.”

Wang downplays neither her own achievements nor the severity of her illness. She instead articulates what it’s like to be both high-functioning (frequently able to “pass” as a neurotypical person) and profoundly mentally ill. Her engagement with popular cultural is crucial to this project. She takes on well-known film portrayals of schizophrenia, most notably A Beautiful Mind, and prominent books on mental health, like Jenny Lawson’s Furiously Happy. Wang’s object with these discussions is less to articulate those works’ failings than to convey the complexity of what it feels like to be schizophrenic, and how difficult that is to articulate to those who have never experienced psychosis.

The Collected Schizophrenias has none of the cynicism regarding psychiatry that marks the canon of mental illness memoirs. Wang acknowledges her own unreliabilities. She’s open about her struggles. But her schizophrenia is real, and she appreciates psychiatry’s attempts to mitigate her symptoms. Pills, she asserts, genuinely help.

Yet she is still aware of the discomfort at medicine’s boundaries. In “Chimayó,” she explores diseases that are, from an institutional perspective, “imaginary.” Wang has persistent and disabling physical symptoms that mainstream doctors and therapists dismiss as psychosomatic. She finds the diagnosis of “chronic Lyme disease” (a disorder not recognized by the CDC) as preferable to no diagnosis at all. That diagnosis leads her to expensive, unconventional treatments, and a crucial insight: “Sick people . . . generally stray into alternative medicine not because they relish the idea of indulging in what others call quackery, but because traditional Western medicine has failed them.”

“Chimayó” and “Beyond the Hedge,” the collection’s closing essays, shift away from the conventional authority that Wang establishes in her early essays. They’re more personal and more concerned with unscientific experiences. While those explorations wouldn’t be disconcerting in another collection, they sit uneasily in the closing pages of this one. Wang’s early clarity and confidence trail away into an unresolved chord of unstable knowledge and cultural doubt.

In spite of these closing discomforts, The Collected Schizophrenias is a profoundly intelligent book. Wang addresses complex issues with scientific literacy and personal openness. Her book is valuable to both medical professionals and lay people; anyone who wants to understand the experience of a woman on the psychotic spectrum would do well to begin reading here.