Coco Chanel: The Illustrated World of a Fashion Icon 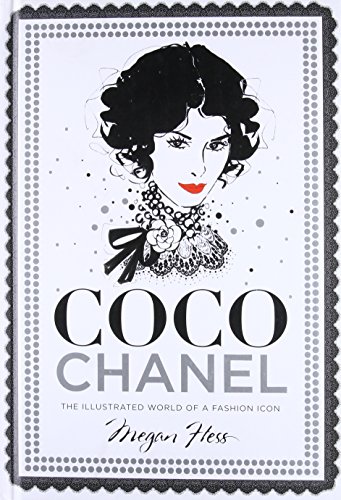 With at least 20 books published on the life and times of Coco Chanel one might wonder what sets this telling of her life apart from the others.

Firstly this is an illustrated version accompanied by an abbreviated narrative telling the story of the designer’s life. But can one trust the writing of Megan Hess telling the story of Chanel and never mentioning the name Wertheimer or that Chanel was forever referred to as Mademoiselle? These omissions are telling and give an idea of what to expect from this book.

One might think in this petite volume that as it is an illustrated story one would expect to see the aging process via illustration. Ms. Hess depicts the fabled designer with one face during the entire telling—and, far worse, none of the depictions even look like the legendary designer. Almost every illustration looks like some 80s interpretation of the couturier as done by some fledgling art or fashion student.

To say that this is a loosely told story is an understatement. For anyone who has ever read even a few of those 20 books it is readily apparent that the facts are told in a highly selective manner. An instance is the fact that Chanel’s costume jewelry was developed by Mademoiselle to mix with her extensive collection of fine jewelry and not strictly to launch a brand extension. But it was the Wertheimers, the family that still retains full ownership of the brand, who enabled Chanel to grow and continue her business post WW II with their financial clout as well as their business acumen. The name Wertheimer has been inextricably linked to the legacy of Chanel for almost an entire century.

Another example of the author’s naiveté on the subject lies in her interpretation of how Mr. Lagerfeld catapulted the then sleepy brand into a juggernaut of fashion. Yes, Karl knows how to massage the DNA of the brand, but he surely did not let that restrict his skill set and imagination in transforming the brand from an old lady collection to a universally accepted name. If one wants to write a book about anyone who has been heavily exposed, then it is one’s responsibility to get the facts straight.