Coached in the Act (A Cat & Gilley Life Coach Mystery) 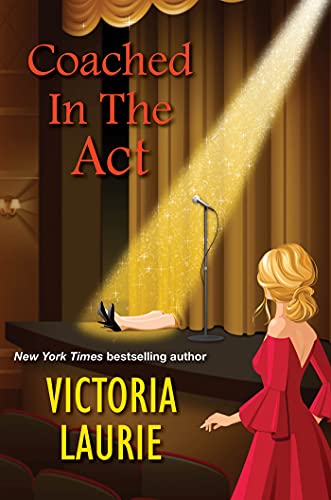 “the required tension-filled dénouement is well done and keeps the final pages turning.”

Victoria Laurie, author of Coached in the Act, presents the reader with an interesting premise—an actress, Yelena Galanis, has written a one-woman show titled “Twelve Angry Men.” It’s a tell-all about the twelve men she has had affairs with, and she’s about to go on stage and reveal the name of each man.

Laurie’s protagonist, Catherine “Cat” Cooper and her best friend, Gilley, obtain tickets to attend the show from Sunny DeAngelos, her good friend and the twin sister of Detective Shepherd, who also happens to be Cat’s main squeeze.

Although many in the audience are giddy about the gossip Yelena is laying out for them, Cat is less than impressed. She leaves before the second act begins; Gilley decides to stay, he will meet her at the local coffee shop after the play.

It is page 44 before the murder occurs, when Gilley arrives at the shop to tell Cat that Yelena has been murdered, and this is where the story begins to unfold. While in the coffee shop, a man enters, covered with blood, stops at Cat’s table, then continues to the men’s room, but he never returns, and when she learns of the murder, Cat believes she has just encountered the murderer.

Add to this fact that the man is then found in the alley behind the coffee shop, murdered, and the story begins to ramp up. Is there a connection between the two murders, and can Cat make that connection? As the investigation proceeds, these two events begin to merge.

However, it is not until page 125 that Cat decides to officially investigate the murder and It should be noted that Cat’s behavior leaves something to be desired. While most cozy mysteries depict a relationship between the main character and the officer of the law as either strained or sharing, Laurie has designed her protagonist as barely sharing any information that she discovers during her investigation—an investigation that is fraught with illegal maneuvers on Cat’s part, such as entering a crime scene and removing evidence and not sharing it with Shep.

As Cat and Gilley investigate the various men mentioned, Laurie gives her team some good instincts as to who these men are. It’s a guessing game and the clues are all laid out for Cat and the reader to interpret. Cat and Gilley are able to identify nine of the twelve, but the reader only meets two of them. The rest are just names.

A side story that eventually closes in on the two murders rises when Cat’s friend Sunny has taken an overdose of drugs and eventually confesses to murdering Yelena. Cat is not convinced and finds no motive for her friend to have committed this crime. In the meantime, Shep is moved to investigating the murder of the man in the coffee shop because his sister is charged with murdering Yelena. Although she sometimes frets about it, Cat shares very little information with Shep.

While the premise is a good one, the tension one would expect to accompany the story is missing, and a number of scenes go into too much detail about things that have nothing to do with the crimes. The story would move along much quicker if the writing were tighter. Either remove or at least cut down on the excessive detail and stick closer to the premise.

Example, Laurie goes into too much detail about making lasagna, or describing clothes, or setting up notes for one of Cat’s previous clients. Also, while many cozy mysteries include a pet—a wily dog or a clever cat—several pages of Chapter 2 are dedicated to Gilley finding and adopting Spooks, a mutt from the local shelter, a dog that is just a cute add-in.

The required tension-filled dénouement is well done and keeps the final pages turning. Cozy fans may find Coached in the Act a good mystery well worth solving in spite of the excessive detail and side stories.