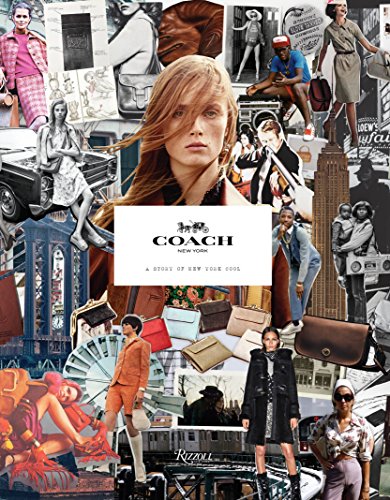 Coach: A History of New York Cool delivers far more than one expects especially if the reader is all about the glories of New York City as well as being a fan of the brand. Coach is both an ode to the brand and even more so a love letter to New York City.

The book celebrates the brand’s 75th anniversary as well as its illustrious past and collaborations. The most image changing and seismic collaboration was with one of the greatest designers of the 20th century by the name of Bonnie Cashin. It was she who made Coach a fashion brand starting in 1961 and lasting thru the mid-70s. In her wake the brand lapsed into dormancy for about 10 years and then reinvigorated over the past 25 years. The Cahns, the original founders, were nothing if not prescient in their concept as well as their choice of Cashin to cross the line from mainstream to fashion cool. The same prescience occurred decades later under the company’s next CEO.

Dinerstein actually credits where credit is due by singling out former CEO Lew Frankfort, who was nicknamed” the second founder, ” as it was his vision that transformed the classic and conservative leather goods/handbag maker into a lifestyle brand complete with eponymous retail stores. So often in a book like this the major forces behind the brand are omitted, which is always a mistake.

Dinerstein employs a rather wonderful way of telling the story of Coach by using the ever-changing landscape of New York City as the back drop to the evolution of a heritage brand. The photographs are about as wonderful as you find, and the text is straightforward and makes for an enjoyable as well as an enlightening read.

In the end, the reader must either be a fan of the brand, a fan of New York City, or just plain curious about how a brand evolves and how the landscape and people of New York City have morphed and evolved starting from 1941 until present day. The book is without question a celebration of all its contents.