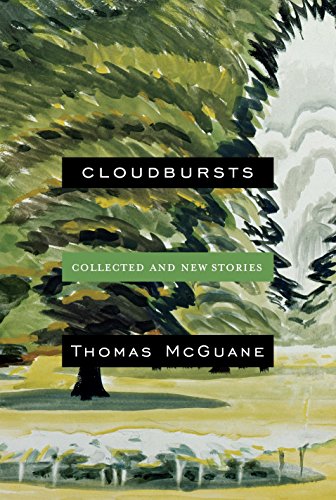 Cloudbursts is novelist Thomas McGuane’s collection of 38 of his best stories, most previously published but some new ones as well. McGuane belongs on the social observer shelf with other short story masters including Anne Beattie, John Cheever, and Roald Dahl. He draws instantly recognizable American characters and their inner struggles play out in circumstances that are at once mundane, dramatic and surreal.

Cloudburst’s stories are mostly set in wide open Americana locales—cattle country, farmland and small towns—otherwise beautiful landscapes that McGuane populates with lost souls living not so quiet desperation. American dreamlands where now rural crossroads have been, as a character passingly observes have been supplanted “with dentists’ offices, fast-food and espresso shops, and large and somehow foreboding filling stations that looked, at night, like colonies in space . . .”

The theme of never colliding cultures and generations is one of McGuane’s resonating ones. In “Aliens” Homer Newland retires from his Boston law firm after his alcoholic wife dies, and he moves back to Montana to pick up where he left off with an old flame and reconnect with his daughter, in the midst of a messy divorce. His grandchildren view him like a creature from another planet until he is forced to communicate.

In “The Good Samaritan” Szabo, a successful inventor of farm equipment, is now a divorced father with a son in jail on drug charges. When he injures himself he has to hires Barney to run the farm, take care of his horses, and do errands for his mother.

Barney is indispensable and he keeps everything on the farm in tip-top shape and can stack wood like no one else. He also is having an affair with Szabo’s elderly mother who refuses to give up smoking. Szabo finds this out when he visits his son in jail just weeks before he is about to be released. Szabo has mixed feelings about Barney and how everything unravels and ravels in the fate of these characters as clearly as thunder in the desert.

“Weight Watchers” tracks a husband whose wife kicks him out of their house after he balloons to over 250 pounds, the limit she has set for him, or else, get out—and he does. He shows up on his son’s seedy doorstep in Denver, and his son tries to put him on a reducing plan. The dad in turn tries to make up for their adversarial past and tries to finally bond with his adult son, but the bad-parenting baggage is as hard to shed as those scale busting pounds.

An old roustabout wild horseman who is on his deathbed and has more stories to tell before he kicks his spurs in “A Long View to the West.” Vivid detailed stories that his son, a used car salesman, has heard endlessly, and as creaky as seem to the son, they linger in our memory.

In “Hubcaps” Owen is a young man on his own as his drinks and not only fights in the home, but occasionally brawls in public. Owen escapes in the woods, collecting turtles, and when he is not doing that, plays ball with his neighbors, the Kershaws. He looks out for Ben Kershaw, described as “disabled and mentally handicapped.” Owen tries to avoid dealing directly with his dysfunction at home. Ben’s father bonds with Owen and when things get too rocky at home, the neighbor takes him on excursions to look for Native American arrowheads on the mud banks of the sacred river.

“A Skirmish” concerns a high school assignment around the Civil War, when three brothers will not let the Confederacy die. They bully, harass, and eventually entrap a fellow student on the Union side. They tie him up in a shack refusing to free him unless he disavows the North. Only a box of Quaker Oats and matches save him. And after he sets himself free, his captors have to face their father knows how to corner his feral son.

“Dogs” spins the tale of an insurance salesman who starts to become unglued. His boorish behavior at social gatherings is tolerable, but he starts acting out in dangerous ways, and is redeemed somewhat when he gets knocked out by a fly ball at a ballgame, even as he is exposed as a compulsive dog-knapper.

“Tango” concerns a socially inept med student who has to paint houses to earn his internship tuition. He takes a job on an estate owned by a rich art dealer and tries to seduce a woman who is companion to said dealer until he exits to that big studio in the sky, so she can seize his assets. Meanwhile they get past any hope of a relationship and become friendly acquaintances. Later, she ends up in his emergency room. It doesn’t end well.

In contrast, in the ominously titled “Zombie” there’s a banker who hires an escort for his virgin son, who only seems obsessed with watching TV. The father’s misguided love results in dire circumstances that could even get worse—until someone changes the channel.

Most of the stories concern white, middle and lower middle class people, and the locales have no visible signs of African Americans, Latinos, Asian-Americans or GLBTQ communities. It jars when one of his characters might refer to “colored” for African American or “fairies” for gay men, without a time peg to the stories—a particularly 50s era sexist world view. But despite non-diversity, these stories are sharply observed, however limited the social scope.

A gay veteran with a little depth does appear in “Miracle Boy” but ultimately just as a sketchy   character. Meanwhile, the story itself is a brilliantly scabrous portrait of family hostility that burst out itself in times of crisis. So all things being equal, McGuane covers the ugliest emotional waterfront, even when boorish characters can lead to occasional boorish writing.

One of the longest short stories “The Refugee” is simply a masterpiece. It tells the tale of Errol, escaping on a boat to Key West, after he is suspended from his job as overseer on an orange farm in Florida for erratic behavior. He dumps himself on his boat and docks where he can to pick up booze and revisit his past. There are periods of blackouts, where he pieces things together, ferrying migrant workers, losing a crew member overboard. He is wracked with guilt from a thousand sins, and true redemption is as fleeting as the next tide, but, as McGuane illustrates, worth living for.

Many of the stories have twist ending a la Hitchcock, and some are tied too tightly. Even others have vaporous denouements inviting the reader to piece the moral of the story together and judge for themselves.