A Cloud in the Shape of a Girl 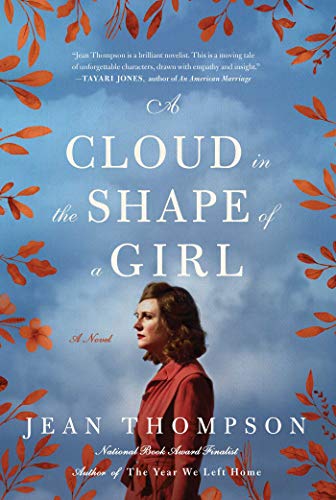 As we approach adulthood, we convince ourselves that the mental scripts that have defined us for nearly our entire lives can be discarded. Or altered. Or at least minimized. I am the responsible one. I am the victim. My parents don’t love me . . . enough. The scripts are a central part of us, yet we keep them at a slight remove, unwilling perhaps to admit how much they dictate our thoughts and behaviors.

In her new novel, A Cloud in the Shape of a Girl, Jean Thompson brilliantly explores these familial struggles. The story centers around three generations of women, the eldest Evelyn, in hospice care when we meet her; her daughter Laura, who alone must arrange for this care, as her husband barely asks about the dying woman; and Laura’s daughter, Grace, who negotiates peace in the family, primarily between her listless and addicted brother, Michael, and her intolerant and alcoholic father.

Here’s the irony. The characters themselves object to such limiting descriptions, yet they continue to meet others’ expectations of them, often repeating the sins of their parents, as they pledge not to do. Listless Michael, for instance, is not diligent about pursuing a career, which infuriates his father, who continues to drink, which only intensifies the scripts he follows. And on and on.

But this is Grace’s book. She, more than anyone, seems better able to navigate the turbulence of family life. While shackled herself with the constraints of daughter and woman and peacemaker, she’s at least willing to step outside herself and explore other possibilities. As a girl, she even tries on different names for herself, as if she can transform herself into whatever she chooses, akin to what one does when gazing at clouds. Her search for balance and independence, however, doesn’t come without a price. “There was a deep current of dissatisfaction in her that Laura [her mom] recognized and wished she did not.”

The dissatisfaction arises because there’s only so much one can do to change the dynamics within a family. “You could announce yourself emancipated from your family and its wars and scars, but you weren’t, not really.”

You might, for example, decide to offer a rare generous remark, but the rest of the family is still following its own established cues. When her brother acts meanly toward their mom, Grace notes that “there was a feel of performance about what she was seeing, as if the two of them had needed an audience, a witness to their unhappiness.” Seconds later, in an act of self-preservation, Grace leaves. “She couldn’t have stayed inside for another minute.”

Who doesn’t know that frustration?—the need to flee—that highlights the remarkable achievement of the novel. While the conflicts this family endures may not have any similarities with the conflicts in your own family, the conflicts feel familiar. They may even offer insights into, say, why your father was frequently paranoid or why your sister would never listen to you. Or you’ll find yourself thinking, I used to say that to my mother, to my daughter.

None of these scripts are written overnight, of course. “Time passed and passed. It built up like layers of glass. You could see straight through it, but every so often there was a shimmer, a distortion, something that threw you off.” A lovely passage. There are many like it that will give you pause. And there’s a beauty in the sentiment, along with subtle warning.