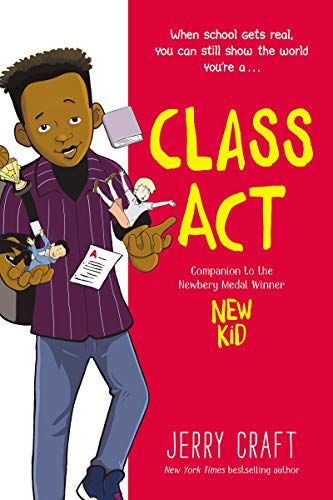 Jerry Craft brings us back to eighth grade in his follow-up graphic novel to the award-winning New Kid. Class Act features the same characters, only this time with as much a focus on Jordan’s (the narrator’s) friend Drew as on Jordan himself. Drew is darker-skinned than Jordan, so he’s the one people consider Black, while Jordan is accepted as Bland. The contrast makes for funny insights as kids ask to touch Drew’s hair and ignore Jordan. As Jordan uses drawing to explain and figure out his world, we see how he and Drew are “exactly the same but very different.” Panels make this clear: “And while they’ll say things to him [Drew] like this: “I would have NEVER thought you were this smart.” They’ll say things to me like: “Oh, you’re not like the others Jordan, you’re not really Black.”

The graphic novel is especially timely as the white adults in the book (parents, teachers, and principals) all try to be sensitive to diversity while putting their feet solidly in their mouths. Craft is brilliant at capturing this awkwardness, but also sweetly sensitive as he shows that Drew’s white friend, Liam, is just as much the odd-person-out in Drew’s world as Drew is in Liam’s. It’s this expansive understanding that makes this book more than a humorous look at middle school.

The most cringe-worthy moments are saved for the clueless adults. There’s the “diversity” leader who butchers students’ names, pronouncing “Tamika” “Tameyeka.” One of the best pages captures wordlessly the well-intentioned blundering as the leader says to Drew, the “representative” Black student chosen to work with the new student group, “Welllll . . . for a first time, that wasn’t too bad. Right?” The next five panels show Drew, looking miserable as he slowly disappears, which he clearly wished he could have done throughout the ordeal. The teacher’s eyes shift uncomfortably, and the reader doesn’t need another word to feel how appalling the whole effort was. All by itself, this page encapsulates the strength of what the graphic novel format offers.

The book has too many memorable moments to cite them all, but the big take-away is that Jordan and Drew both learn they need to accept themselves before they can expect others to do so. This self-confidence and self-awareness is what every middle-school student needs. The adults in the graphic novel need it as well, but we have less sympathy for them. It’s the kids who are the heart of the story and the ending reassures us that the friends are there for each other—and for themselves. Truly a class act indeed!