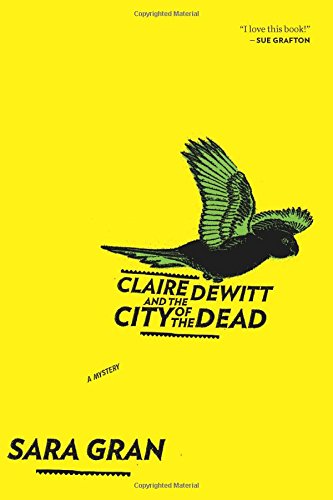 “Claire DeWitt and the City of the Dead is a highly original, refreshing, sometimes humorous, often ironic mystery, with an intriguing and involved plot and even more fascinating backstories and future possibilities.”

As Claire DeWitt and the City of the Dead begins, P.I. DeWitt gets a call from New Orleans—a city where she lived and studied “detection” for years—and a city she hoped never to see again.

It’s 2007, a year and a half after the devastation of Hurricane Katrina and the resulting floods. DeWitt’s caller, Leon Salvatore, wants her to find his uncle, Vic Willing, an assistant district attorney, who has been missing since the flooding.

DeWitt herself has recently gotten out of rehab for a nervous breakdown. Her doctor, Nick Chang, a practitioner of Chinese and Ayurvedic medicine, sent her to an isolated place called “Spot of Mystery” to take care of goats, including shoveling excrement, as a cure. Claire seems to have recovered—for the present at least. Still, she has no desire to go back to New Orleans.

But Dr. Chang tells her: “Take the job, you have to tie up loose ends sometime.”

So DeWitt heads to her old hometown to solve the case of Vic Willing, a case which turns out, of course, to be full of surprising twists and turns. Is Vic Willing a saint or a monster? Clues lead in both directions. And the story takes DeWitt through the still-devastated city—talking to survivors, drug dealers, and homeless souls. These are the people that DeWitt apparently feels most comfortable with. She sees the ghetto drug dealers as young men who’ve never had a chance in life. She sees the best in them, sharing joints and bottles of malt liquor, talking and laughing till sunrise—even with ones who have tried to kill her.

And she talks to survivors of Katrina: families who were trapped on roofs as the waters rose, who lost their homes and possessions in the flooding. These dramatic stories show the reader some of the realities of Katrina—and they help lead DeWitt toward the truth of what happened to Vic Willing.

True to her training in detection, Claire follows even the most unusual and tangential clues and coincidences, listens to her dreams, rejects easy solutions, and remains open to ugly truths her client might not want to hear.

But as intriguing as the plot may be, this is mainly a powerfully character-driven story. The first in a projected series, the book introduces and fills out the back story of Claire DeWitt, the self-proclaimed “world’s greatest detective.”

And that entire backstory is what makes the book truly special. Through a series of flashbacks the reader learns about Claire and her amazing cast of characters—enigmatic French detective Jacques Silette; childhood friends Kelly and Tracy who developed a bond with Claire as street-smart girl detectives and graffiti artists; and Constance Darling, student and sometime lover of Silette and Claire’s guru of detection in New Orleans.

Silette, Kelly, Tracy, Constance, Claire herself, and others come bursting alive from the pages, as the book explodes with mystical wisdom and insight (some readers might disagree) as well as irresistible possibilities for sequels.

Silette, for example, was a mysterious French detective who wrote Détection, Claire’s bible of investigation. Silette solved mysteries that others could never fathom. But the wisdom of Silette in Détection may not be for everyone:

“The detective will never be thanked for revealing the truth. . . . His only reward will be the awful, unbearable truth itself.

“The finger that points the way is not the way. The mystery is a pathless land, and each detective must cut her own trail through a cruel territory.

And Claire even provides caveats to accepting Silette’s wisdom, including:

“The book is notoriously difficult, sometimes nonsensical, always contradictory, repeating the bad news and never repeating the good, never telling you what you want to hear, always just out of reach.

“That was how I knew it was true.”

In 1973 Silette visited the United States with his wife and two-year-old daughter Belle. During the visit, Belle disappeared. There were no leads to the disappearance. This was a case that even Silette could not solve. He died in 1980, “his heart broken.”

But Silette’s influence never died. Claire DeWitt was an outcast in high school in a depressed Brooklyn neighborhood. In fourth grade, she noticed a girl with the “Official Cynthia Silverton Girl Detective Decoder Ring.” Thus began a solid bond between aspiring girl detectives—Claire, Tracy, and Tracy’s friend Kelly. (But don’t worry; this is definitely not a Young Adult “girl detective” story.)

The bond solidified when the three were inspecting a closed-off part of the DeWitts’ dilapidated mansion. Hidden in a dumbwaiter was a book, its yellow cover depicting the lone image of a crow in flight. The book was Silette’s Détection, and lives of the three girls—their way of viewing the world, observing clues—would never be the same.

“Détection was a door to another world; a world where, even if we didn’t understand things, we were sure they could be understood. . . . A world where mysteries could be solved. Or so we thought.”

“Life could not be predicted, I saw. And no one could be trusted.”

Another character in DeWitt’s back story is Silette’s disciple Constance Darling, an elegant, wealthy, and unconventional New Orleans detective and teacher who took Claire as a pupil when the young woman arrived in New Orleans.

Yes, it’s quite a coincidence that Claire, with her cherished copy of Détection, should meet a teacher who also followed Sillette; but many coincidences appear in this book—perhaps more than some readers will accept. Yet coincidences help Claire follow the trail of Vic Willing. As she has learned from Détection:

After ten years of mentoring Claire, Constance was gunned down in a restaurant, the apparent victim of a random robbery. Claire, again despondent and alone, moved on to San Francisco—never wanting to return to New Orleans.

What happened to Belle Silette? Will Tracy ever turn up? Was the murder of Constance really random? None of these questions are central to the search for Vic Willing through a flood-ravaged New Orleans. But they gnaw at the reader’s brain and beg for sequels to this unconventional story.

Even the book’s dust jacket is unusual, nothing like the dramatic image of most crime stories. Bright yellow (as is the cover of Détection itself), it shows the image of a green parrot in flight. The title’s lettering is whimsical, belying the tragedy of the story inside. In the upper right corner is a quote from best-selling mystery author Sue Grafton: “I love this book!”

Many readers—those who can handle the coincidences, the bleak depiction of New Orleans, and the enigmatic advice of Détection—will likely echo Grafton’s exclamation. Claire DeWitt and the City of the Dead is a highly original, refreshing, sometimes humorous, often ironic mystery, with an intriguing and involved plot and even more fascinating backstories and future possibilities.

Readers may wonder: Is it truly possible for a “girl detective” to grow up to be a hard-boiled seedy, tough-as-nails P.I.—in fact “the world’s greatest”? Read the book and you’ll find out.