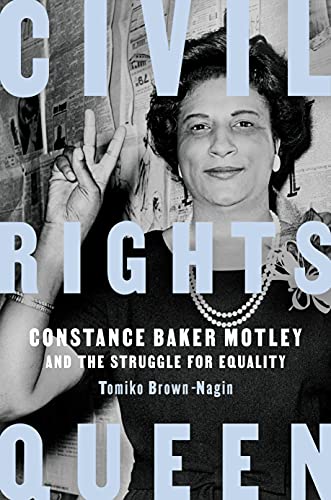 “As the United States inches toward the long-overdue appointment of the first Black woman to the Supreme Court, Civil Rights Queen . . . tells a critically important and . . . untold story of the struggle for racial and gender equality . . .”

Anyone familiar with Freedom Summer veteran Mary King’s memoir, Freedom Song, knows that the most notoriously sexist moment of the civil rights era—when Stokely Carmichael answered the question, “What is the position of women in SNCC?” with the single, unforgivable word “Prone!”— didn’t occur in a bitter confrontation, as has often been reported. Rather, Carmichael posed and answered his own question as part of a self-parodying comic monologue delivered at an after-hours gathering to lighten the tension of a movement at a difficult crossroads. (And by Mary King’s account, it did just that.)

But there’s a reason Carmichael didn’t seize his last chance to defend himself in his posthumously published memoir, Ready for Revolution. Carmichael knew that history had generally dealt fairly with him and other men who had risen to prominence in the Freedom Movement. But rarely, if ever, has that been the case for the women who dedicated their lives to the struggle and played critical roles in securing its victories.

This problem didn’t start with historians. It started with the self-empowered men of the movement who invariably consigned women to subordinate roles and failed to amplify the achievements of the women who pushed beyond these constraints.

In recent years, the historical record has improved dramatically with regards to those women. The first two decades of the 21st century brought two revelatory biographies of prominent women in the movement that redefined our understanding of them and the struggles they propelled: Barbara Ransby’s Ella Baker and the Black Freedom Movement: A Radical Democratic Vision (2004), and Jeanne Theoharis’ The Rebellious Life of Mrs. Rosa Parks (2014).

A third volume has joined that elite company: Tomiko Brown-Nagin’s Civil Rights Queen: Constance Baker Motley and the Struggle for Equality. Like the others, Civil Rights Queen transforms the civil rights story and its pantheon of pre-eminent figures.

Hired by Thurgood Marshall as a law clerk at the NAACP Legal Defense and Educational Fund (LDF) in 1945 during her final year at NYU Law School, Constance Baker Motley spent more than 20 years at the LDF, working behind the scenes on Brown v. Board of Education, and litigating cases that struck down segregation at the state universities of Georgia and Mississippi. Motley went on to argue 10 critical civil rights cases before the Supreme Court, winning nine, and served as Manhattan Borough President and a New York State Senator before becoming the first Black woman confirmed to the federal judiciary in 1966.

Motley was dubbed the “Civil Rights Queen” by a reporter in 1962. “Part heroine and part warrior, the moniker implied,” Brown-Nagin writes, “she wielded the law like a sword of justice.”

Heralded as a “phenomenally talented” courtroom tactician, effusively praised by the likes of Thurgood Marshall for her success as his co-counsel over many years, and Martin Luther King, Jr. for her work as King’s lawyer during the protracted battle against segregation in Birmingham, Motley performed with equal distinction as a legislator and judge. In Albany, she took on school and housing inequity; over three decades on the federal bench, she wrote pivotal decisions on prisoners’ rights and workplace discrimination and emerged as a critical figure in implementing the Civil Rights Act of 1964.

Despite these signature achievements, Brown-Nagin writes, “most books and articles on the civil rights movement understate her importance.”

Brown-Nagin suggests a number of reasons why Motley’s role in dismantling Jim Crow and establishing a more equitable legal and social structure in its place have failed to receive their due. First and foremost is the sexism she encountered at both the LDF and in innumerable courtrooms.

Thurgood Marshall emerges as a clay-footed hero in Civil Rights Queen, from the moment he concluded his initial employment interview with Motley by asking her to climb a ladder by his bookshelf so he could examine her legs. Brown-Nagin takes pains to qualify Marshall’s behavior—monstrous by today’s standards—as typical of its time. But she is less forgiving of Marshall’s unilateral decision to ignore Motley’s seniority and promote a less-qualified white, male attorney to executive director of the LDF when he left to take a seat on the U.S. Court of Appeals in 1961.

That same pattern of undervaluing women’s contributions to civil rights organizations drove Ella Baker out of both the NAACP and the Southern Christian Leadership Conference (SCLC) and impelled her to advise student movement organizers like Diane Nash, John Lewis, and Julian Bond to form their own organization rather than falling into line as a SCLC subsidiary, as Martin Luther King would have preferred.

King’s high regard for Motley is indisputable—he thought she “walked on water,” according to MLK lawyer and speechwriter Clarence Jones—but his immense respect for her owed much to her unique status as a high-powered courtroom attorney and her “fashion plate” appearance, Brown-Nagin argues. As Baker experienced time and again, King’s acceptance of Motley as an equal was entirely atypical of his relationships with women who played vital roles in key movement organizations, and the same went for Marshall, NAACP Executive Director Roy Wilkins, and others of their stature.

Despite her sterling record on the bench, Motley also found her ability to hear civil rights and women’s rights cases with the requisite objectivity questioned throughout her tenure, based on “the cartoonish assumption that identity determines how judges decide cases.” Judge Motley’s record tells a different story. The fact that she couldn’t reliably be counted upon—particularly in employment discrimination cases—to rule in a plaintiff’s favor regardless of the merits of their case, rankled many civil rights claimants as well. “In truth,” Brown-Nagin writes, “the assumption that a civil rights claimant would ‘automatically win’ in her courtroom irritated her.”

Despite the “double discrimination” she encountered throughout her career, Motley’s achievements are legion and masterfully recounted in Brown-Nagin’s consistently lively, fluid, and authoritative narrative. Her accounts of the struggles of Autherine Lucy and James Meredith to desegregate the state universities of Alabama and Mississippi, respectively, are brilliantly rendered, often wrenching, and quite illuminating in their portrayal of the attorney’s role.

Perhaps most fascinating in Civil Rights Queen is to see how Motley operated at the uncomfortable intersections of different factions of the Freedom Movement. As an attorney intimately involved in the trials of protesters who put their bodies on the line for the cause, Motley showed far more respect for and sympathy with them than others at the NAACP, such as Marshall and Wilkins, who often spoke dismissively of the role of direct action in the struggle.

But as a left-liberal attorney—and later as a borough president, state senator, and judge—thoroughly committed to working through the system’s legal and legislative channels to achieve the Movement’s goals, Motley often ran afoul of those pursuing more radical strategies of obtaining racial justice. Her demonstrated affinity for respectability politics dates back to her earliest civil rights casework, and her belief in integration as a remedy for inequality seemed out of place to some as her field of operations shifted from the Jim Crow South to New York City. During her relatively brief time as Borough President of Manhattan, Motley’s efforts to bring integrated housing projects to Harlem drew fire from Black activists who decried the notion that desegregating the city was a desirable goal.

Despite her antipathy toward many movement radicals and their tactics, Motley’s behind-the-scenes efforts to free Black Panther Ericka Huggins—widow of Motley’s cousin, slain Panther leader John Huggins, Jr.—proved critical to her eventual release. Brown-Nagin’s account of John Huggins’ childhood in Motley’s New Haven, Connecticut hometown, his entry to the BPP, his assassination alongside fellow Panther Bunchy Carter at UCLA in 1969, and the FBI’s subsequent targeting of the New Haven Black Panther Party proves one of Civil Rights Queen’s most poignant chapters. Though Motley had generally taken a “dim view” of Black radicals and nationalists since her frustrating debates with Malcolm X several years earlier, she “also knew how overzealous and unethical the FBI had been.”

The remarkable arc of Motley’s career ultimately proved both triumphant and disappointing, as she fell short of the U.S. Court of Appeals and eventual nomination to the Supreme Court. Brown-Nagin concludes that “Motley’s race, gender, and practice background deprived her of recognition as one of the judicial greats.”

Yet her example inspired some of the greatest of the greats, among them Associate Justice Ruth Bader Ginsburg, who recognized Motley as “My Human Rights Hero” in a remembrance written at the time of Motley’s death in 2005.

As the United States inches toward the long-overdue appointment of the first Black woman to the Supreme Court, Civil Rights Queen tells a critically important and hitherto untold story of the struggle for racial and gender equality and reminds us that no one reaches a glass ceiling—let alone breaks through it—without standing on the shoulders of giants.