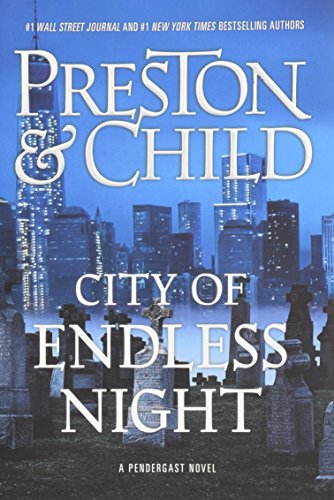 The most important thing to understand right up front about City of Endless Night, the latest Pendergast novel by Douglas Preston and Lincoln Child, is that there are a lot of people who really like this stuff. I mean, really like it.

They subscribe to The Pendergast File, a monthly “strangely entertaining note” from the authors, they check out the Agent Pendergast website for extra tidbits (a separate website, by the way, than that maintained for the authors), and they buy the books. The 16 previous novels featuring the eccentric, albino-like FBI special agent have all been overwhelming bestsellers, and City of Endless Night is certainly not expected to be a poor child by comparison.

Fans who have drunk the Pendergast Kool-Aid (sorry, but the authors use this unpleasant metaphor themselves in another context) will be excited by this latest diversion, but the second most important thing to understand about City of Endless Night is that the rest of the reading universe, comprised of people searching for something that is actually worthwhile to read, are going to be tossing this one aside as improbable at best and clownish at worst.

The premise is simple: Someone is killing members of the “one percent” and absconding with their heads. The Decapitator, as the press dubs him, is able to penetrate the most impressive security setups one could possibly imagine in order to make his kills and get away with his trophy.

NYPD Lieutenant CDS Vincent D’Agosta is actually glad when the FBI shows up in the person of Aloysius Xingu Leng Pendergast, and he feels slighted when the latter declines to participate in each and every interview and site visit. For his part, Pendergast tells D’Agosta “I feel rather like Brer Rabbit being thrown into the briar patch.”

Pendergast, for the uninformed, is a combination of Sherlock Holmes, Bruce Wayne, and Dr. Stephen Strange. He lives in a “dark and seemingly abandoned” mansion, he has a man-servant named Proctor who chauffeurs him around in a Rolls Royce, and some of his friends have been alive since the 19th century. D’Agosta, on the other hand, is a streetwise cop who digs beer and uses a lot of colloquialisms when he speaks.

Seemingly pulled from the pages of a comic book, our protagonists participate in a story that is equally less than literary. D’Agosta flounders as the body count climbs and ends up adopting an improbable hypothesis published by journalist Bryce Harriman, who might qualify as one of the ten most annoying fictional characters of the decade.

Meanwhile, Pendergast drifts around, picking up mysterious bits and stuffing them into evidence bags without a word of explanation. No one knows what the hang he’s doing, not only the other characters but also the readers, who are equally as baffled and deprived of enlightenment as Pendergast’s “investigation” progresses.

When the game’s finally afoot and the culprit is revealed, we discover that there are still 70 pages to go. With disbelief we realize that the climax of the story is going to take that long to play out, and with one of the most tired and clichéd suspense tropes you could possibly choose.

Even worse, as Pendergast tries to outthink his opponent, he writhes through a series of “reverse, double-reverse, and double-double-reverse” psychological twists worthy of Vizzini in The Princess Bride.

Worse still, the authors flip-flop between Pedergast’s point of view and that of the threatening antagonist, defanging the story of almost all its suspense and further distancing us from our hero.

One more thing about the characters in this novel. It’s bothersome enough that Pendergast’s shoes have to be John Lobbs, that his gun is a Les Baer, and that his tea at any given moment might be plain green or might be puerh. It’s irritating not to know what a “prized sardonyx of Cassis madagascariensis” is without having to look it up, or why Howard Longstreet, FBI executive associate director for intelligence, always seems to be drinking Arnold Palmers (?) whenever Pendergast walks in.

But far and away more bothersome is the fact that we have to sit through a dinner with these two in which Longstreet sends back a $600 bottle of Mouton Rothschild, “pronouncing it corked,” and then sends back his calves’ brains sautéed in Calvados sauce because they’re overcooked. calves’ brains. Think about it. These men work for the FBI, remember. We’re all aware of the heat the FBI is currently taking. Was this pretentious, off-putting bit of dilettantism really necessary given the current climate in law enforcement? Was it really?

While the faithful initiate will love it, City of Endless Night is the kind of paperback that will end up abandoned in a lot of airport lounges, bus shelters, and thrift store donation bins. While it plays to the fan base, it quite simply fails to engage readers not already signed up for the newsletter.