The Citizen Patient: Reforming Health Care for the Sake of the Patient, Not the System (H. Eugene and Lillian Youngs Lehman) 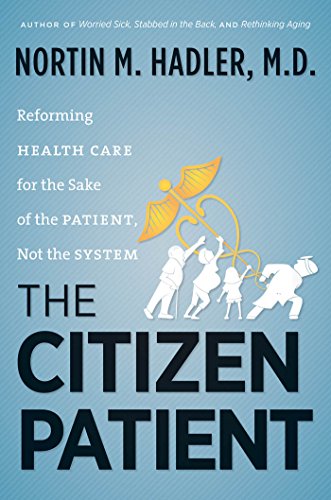 "even his critics have to admire his pluck."

Dr. Hadler's Citizen Patient is his fourth book on health care maladies and professional fixes, so he is indeed an expert observer of medical practices and how they have morphed over the years.

As usual Dr. Hadler strives to address poor health care practices and ineffective health care management tools, but his fundamental point is that all of the excessive technology that is foisted onto U.S. patients does not, in most cases, benefit that patient’s health status.

Though his book is slim on citations supporting his assertions, given the plethora of his other books on functional problems with American health care, his expertise is implicit. Dr. Hadler is at his best when he adopts his “in-clinic” patient counselor perspective, reminding us of the days when being a physician meant addressing the patient’s entire being not just their cardiovascular, endocrine, or neurological systems. Perhaps when the doctor came up with the title he meant for clinicians to view the patient as the sum of all her parts, not parts of a system of control.

Dr. Hadler deploys a bit too much Latin for this book to be accessible to the layperson, but it is a great university reference when, for example, he discusses caveat emptor while referencing the marketing shenanigans in American health care. Or primum non nocere (do no harm), making those of us who aren’t doctors or lawyers or from a rarefied educational background wonder if exposure to Latin is really necessary for better health in America.

Dr. Hadler’s discussion of scientific studies is first rate, revealing how conflicts abound in study design, administration, and reporting of results, but he goes further, suggesting highly effective remedies to this problem by looking at the Number Needed to Harm in a study and not just the Number Needed to Treat.

This approach reflects his liturgical view: that while conducting fewer studies—which should be controlled by the government (NIH)—seek to answer true hypothetical questions and only incorporate those which show a significant finding for a decent sample size. Though the contract research organization industry—which has grown by managing and measuring studies for the for-profit industry—profit motives such as the pharmaceutical industry trying to prove that drug X is marginally better than drug Y does not necessarily add to the health of the nation as much as big pharmaceutical company profits.
The real research in this country is funded almost entirely by federal grants through the Health and Human Services Agency. It seems only logical that as taxpayers we should look at ways to optimize that for which we are already paying, which is not the same as making money for the private sector.

Other Aha! moments include Dr. Hadler’s assertion that the hospital supply industry, including medical device manufacturers, are exempted from true free market pressures, which isn’t hard to imagine given their monopoly and historically stratospheric profit margins.

Dr. Hadler’s knowledge of conflicts endemic in U.S. health care is unparalleled. He also hits a home run when he exposes the lack of transparency in health care services that allows for excessive charging, and veiled results that often do not improve patient health. Very few health care entities are willing to explain their billing for services rendered, which is geared to obtaining the most reimbursement from Medicare and not meant to be understood or affordable for the patients. In Dr. Hadler’s view the patient in American health care is almost inconsequential in the industrial machine of U.S. health care, something that is not hard for us to believe as we wait 30 or 45 minutes to get 15 minutes of medical attention.

Finally, he skewers many of the big players in health care who enjoy exorbitant profits, including the pharmaceutical industry, but his examples are so clear and his integrity impeccable such that even his critics have to admire his pluck.