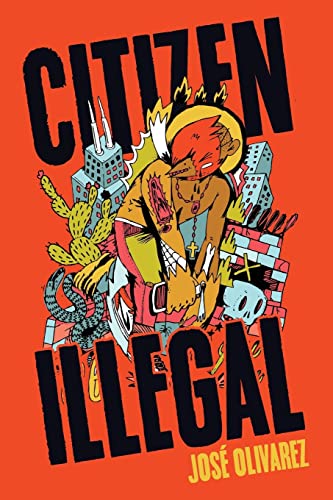 “OIivares makes us laugh, cry, and empathize with immigrants grappling with conflicting identities and often unwilling hosts. At the same time he reminds us that we all experience the same kind of issues around juggling culture, community, family, and individual aspirations.”

Our foundational myth hinges on the key role played by a potpourri of immigrants stirred together in a melting pot fostering hard-working, upwardly mobile, and patriotic citizens dedicated to building a better life for their families and enriching their adopted country through cultural diversity. In stark contrast is the current counter-narrative about an appalling influx of criminals, rapists, terrorists, job stealers, and deadbeats that demonizes and dehumanizes migrants as xenophobic flames are fanned by protectionist factions at the highest levels despite our reliance on foreign-born labor.

This increasingly overt prejudice compounds the already stressful identity crises faced by immigrants attempting to fit into new niches in a more and more unwelcoming society. Struggling to adapt to new milieux while straddling two cultures at the intersection of multiple identities, immigrants, both legal and illegal, engage in daily tap dances straddling past and present lives.

Even the children of immigrants, citizens born in America, have to deal with ongoing hyphenation as Mexican-Americans living in metaphorical borderlands juggling partitioned personas. If you have a Latino name, speak with an accent, eat beans, listen to Selena’s Tejano music, and if you are brownish what does it take to be regarded as a “real American” especially if your culture’s contributions are no longer valued but seen, at best, as a drain on taxpayers? And how do you reconcile these contradictory tugs with familial and cultural expectations?

This constant tension around identity politics is the backdrop to the debut collection of short pieces by young Latinx poet José Olivarez. Citizen Illegal, a slim volume of highly personal work opens a window onto the everyday lived experiences of a first generation migrant in the liminal interstices between Mexico and America.

Although the specific topics range quite widely through the life spheres and settings a bicultural youth engages in coming of age, the focus throughout centers around contradictions over migration, borders, home, family, friends, lovers, and cultural markers and how these change over time as the narrator’s perception matures.

The volume is divided into five sections that ebb and flow into each other, often amplifying previous themes to build a cumulative narrative on what it means to grow up Latinx in Chicago today, in Calumet City, to be precise, as the child of hardworking but often financially struggling immigrants—a steelworker father and a mother whose work “is turning sanitary/into pristine/.” Never forgotten is that the parents were originally illegals. “My parents fold like luggage into the trunk of a Toyota Tercel” but the man in green did not open the trunk!

The sections lack clear demarcation, but the component poems build together like bricks. The first section sets out the parameters of the transplanted migrant’s fractured identities as he sees himself and is likely seen by others. Here, the first poem “(Citizen) (Illegal)” sets the tone for the whole book about the constant interplay between self and othering which a Mexican American experiences in everyday life in the borderlands wherein every label must be decoded.

These tensions are further exacerbated if that baby boy has white skin, learns perfect English (citizen), attends college (citizen), but becomes a poet. The first three traits likely earn a “pass” on the Americanness scale, but writing poems can be a suspect occupation in both cultures (illegal), while the guilt at betraying one’s heritage by speaking only broken Spanish is a constant weight on the psyche. Mexican-American identity is an ongoing seesaw under constant renegotiation.

The second and third sections show how this bracketing of identities is operationalized in domestic, neighborhood, and city settings as the narrator’s interaction spheres broaden. The local shopping mall evolves from a place where immigrant families try so hard to fit in that they stick out like a sore thumb, to an ode to cheese fries by an avid consumer who exults in the “golden goo of artificial deliciousness” and lusts after “a joy so fake it stains my insides and never fades away.”

Meanwhile Cal City teens explore themselves and each other in basement parties with “lights off & even your closest homies unfamiliar. under ground. under the influence.” And you learn that love makes you fat, then you go on the Broke Heart Diet and get skinny when love leaves you. Even your mom puts on makeup and “she is not a mom at all” on the occasional night out, a respite from her cleaning job, family responsibilities, and looming foreclosure.

Although Mexican American horizons expand, you still try to be a good Mexican son even though you attended a prestigious college and “learned depression isn’t only for white people” and “came home for the holidays, still a disappointment, no million-dollar job or grandkids. Spanish deteriorating. English getting more vulgar.” And all the while the lifestyle disconnect from your roots grows and people question if you’re really Mexican. “I ask Jesus how I got so white and Jesus says man, I’ve been trying to figure out the same damn thing myself.”

The last two sections of the collection reprise the themes of migration, home, and identity, tying the hybrid personas together in a loose skein ready to be rewound as the self continues to be unpacked. In particular, “home” remains elusive to migrants because “My Family Never Finished Migrating We Just Stopped” and built a sanctuary under the superficial illusion of place while memories of Mexican roots flourish even though the homeland now regards them as gringos.

A segment of the serial poem “Mexican Heaven” is presented in each of the five sections of the book weaving disparate threads in the skein together. Never quite fitting in, constantly feeling they must work harder, always being judged, and afraid of being found wanting, for Mexicans heaven might be a place where all are welcomed by Pedro with a shot of tequila, or a place “where all the Mexican women refuse to cook and clean . . . or do anything except watch their novelas, the rats are fat as roosters & the men die of starvation.”

More likely than these relatively comforting scenarios are the prospect of a Mexican heaven where: “Saint Peter lets Mexicans into heaven, but only to work in the kitchens . . . they dream of another heaven, one they might be allowed in if they work hard enough.” And even then “there are white people in heaven, too. they build condos across the street & ask the Mexicans to speak English. i’m just kidding. there are no white people in heaven.”

In sum, this debut collection of verse might be slender, but it packs a gut punch as a reality check on the immense challenges immigrants face in every aspect of their daily life, on their struggles to unpack their evolving identities, and on how we (legal) see immigrants (illegal) versus how we (legal) are seen. These pictures are stark reflections of the sheer ugliness of our current immigration policy and practice and the sentiments behind them.

The personal touch, conversational style, focus on everyday experiences, ready wit, and penetrating critical insight make the poems accessible to a general readership much broader than the usual gamut of poetry aficionados, and, in particular, will strike a chord with young readers and maybe inspire some potential poets.

In sum, OIivares makes us laugh, cry, and empathize with immigrants grappling with conflicting identities and often unwilling hosts. At the same time he reminds us that we all experience the same kind of issues around juggling culture, community, family, and individual aspirations. As such, Citizen Illegal is a very human testimony in a seemingly increasingly inhuman world reinforcing the imperative of rethinking our country’s approach to immigration at this very critical juncture.