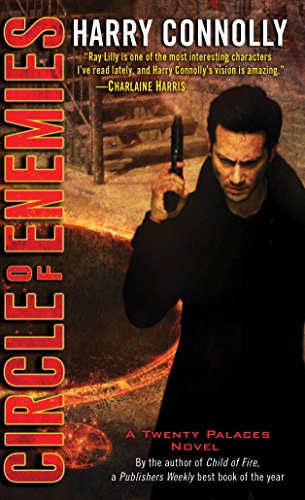 “Circle of Enemies is well worth the read. . . . fresh and new . . . noir made vital again with really strange monsters. It’s a thriller . . . And it’s addictively compelling.”

Circle of Enemies feels like something new in the field. It’s an urban fantasy, and it has many of the traits other books have in the genre: first person narrative, the intrusion of the supernatural into the everyday world, a certain “in the now” colloquialism—but it also has twists that make it feel like something we haven’t read before.

Circle of Enemies automatically invites comparisons to Jim Butcher’s Dresden Files series, not least because Butcher has a blurb on the cove—but these books are not exactly like those. Ray Lilly is not a wizard; in fact, it’s his job to stop those who use magic. He does so on behalf of The Twenty Palaces Society, which holds that all users of magic are a threat to the world unless they work for the TPS—and possibly even if they do. The Society considers Ray disposable, so he knows very little about what he’s getting into at any point. They tell him only the bare minimum, and he has to draw on his own experience and wits for the rest, giving the reader instant investment in his actions.

But the biggest difference is the tone. Circle of Enemies is far grimmer than any of the Dresden books and almost entirely lacks the chatty, pop-cultural voice that Butcher uses. Circle of Enemies reads like a noir (though not really like a detective novel) for the most part: with short, tense sentences, little emotion at the beginning, and not a lot of internal dialogue to clutter up the action—which abounds. It’s the perfect tone for this book, and fits Ray’s characterization as an emotionally shut down ex-con and current hit man. The reader can easily believe that this man does a lot of bad things in the name of good.

The book is a quick and exciting read. The drama unfolds through Ray’s old circle of friends who, as the title indicates, are all now enemies for a wide variety of reasons. As Ray learns what’s happened to them and tries to save them, he also gleans a wider perspective on the world he’s been in since the first book in this series. By the end of Circle, he makes a literally world-changing decision that should make the next few books even more complex and interesting.

The world in this story is rich and dark, reflecting the bad side of town—the underbelly of Los Angeles. Morality is murky at best, and that works perfectly for the story. There are all sorts of interesting and complicated plots that tie directly to the main character; there are also subplots that fill in the shapes of the world he’s in, foreshadowing the world he’ll have to move through in future books. The main villain is unexpected, sickening due to what he’s inflicted upon himself not to mention what he stands for, and difficult enough to beat that he becomes a believable threat. The use of magic costs Ray dearly, causing long-lasting consequences—exactly as it should be in such a gritty world.

Circle of Enemies is well worth the read. In a genre quickly filling up with clones, it stands out as fresh and new, while harking back to older formats in a way that anchors it in pseudo reality. It’s noir made vital again with really strange monsters. It’s a thriller almost totally lacking the usual obsession with the technical details of the weapons, leaving more space for thrills. It’s one man against the dark with only a paper knife and woefully little education. And it’s addictively compelling.