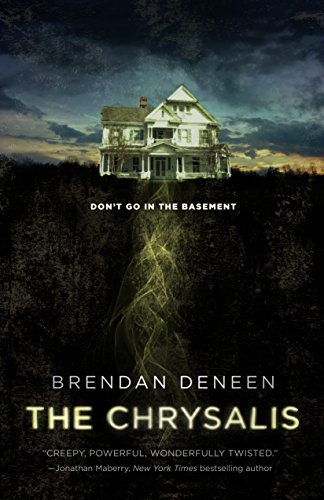 “The Chrysalis has a creepy concept, but its focus on interpersonal relationships among the bourgeoisie crowd detracts from and mystifies the true nature of the vile chrysalis.”

Moving can be hell. Having your first child can be hell. For young couple Tom and Jenny Decker, these ordinary stresses are made way worse by a certain house in suburban New Jersey. Deep in the bowels of this ancient house is an unnatural artifact that was originally brought stateside by the house’s former resident—a female archaeologist who wound up killing and chopping up her husband. This house now belongs to the unsuspecting Deckers.

In the novel’s Dedication, author Patrick Deneen dedicates The Chrysalis to old horror movies on VHS, paperback horror novels, and comic books written before 1990 CE. This dedication fits because The Chrysalis is intentionally nostalgic. This is nothing less than suburban horror in the vein of John Carpenter. However, as good as the novel’s plot is, the execution leaves much to be desired.

The novel’s title is derived from a strange, pulsating mass located in the house’s basement. Even before the family properly moves into the house, Tom finds himself intimately drawn to the chrysalis. Before long, he spends his mornings and evenings with the entity.

As to be expected, the entity begins to negatively alter Tom’s personality—the once lovably slovenly artist becomes a suit-and-tie salesman with a terrible temper problem. Jenny feels the effects of the creature, too, as she begins having terrifying hallucinations featuring gore, evil-looking children, and millions of millipedes. At some point, both Tom and Jenny develop supernatural strength. This occurs even though Jenny never touches the chrysalis until the novel’s climax.

Jenny’s preternatural strength is just one of the unknowns of this book. The biggest unknown is the chrysalis itself, for it is never explained what it actually is, where it comes from, or what it wants. It’s just simply . . . a thing that comes alive at the end of the story.

Speaking of that climax, it is the most horrific moment in the entire novel. After over 200 pages of moody atmosphere, the chrysalis finally reveals its true and truly horrifying shape. Sadly, for those wanting action, this moment (which lasts barely 20 pages) is not enough of a payoff after sitting through 200+ pages of a domestic melodrama.

While the evil at the heart of The Chrysalis never disappears, the majority of this novel has nothing to do with the monster in the basement. Rather, Deneen’s novel is about the terrors of having to grow up (finally) in your late twenties. Tom and Jenny’s crumbling relationship and their problems with the adults around them provides the vast majority of the content in The Chrysalis. There is nothing wrong with this per se, but in a self-proclaimed horror novel, one would expect and want more fear-inducing passages.

Overall, The Chrysalis has a creepy concept, but its focus on interpersonal relationships among the bourgeoisie crowd detracts from and mystifies the true nature of the vile chrysalis.