Chronicles of the Unexplained: True Stories of Haunted Houses, Bigfoot & Other Paranormal Encounters 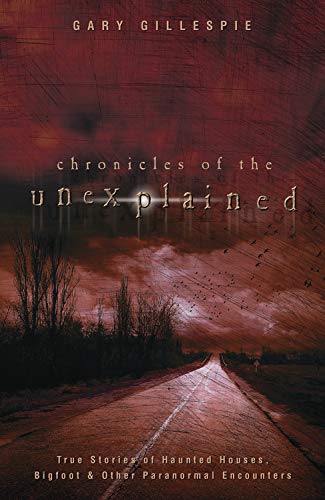 Every corner of the world is now seemingly explored, mapped, photographed, and available for visiting on the Internet. A new golden age of discovery is opening up, however, in which anyone can have adventures traveling to just that grassy island in the middle of your highway, your backyard, or that dilapidated old house down the road. Throw in a trip to the local historical society or the public library and you’re ready for personal adventure. It is a rebellion against the situation described by author Gary Gillespie of how “most of us seem trapped in our realities without being able to take a second to know our surroundings or ourselves.” You may not be going to the ends of the earth, but closer to home you might find the no less strange and exotic.

Everyone has ghost stories, personal encounters with the unexplained that could potentially also be paranormal. They are more than anecdotes that you share with friends on a pleasant evening about strange noises, furniture that moved, or apparitions that some friend of a friend claimed to have seen. It is about the strangeness of the world felt but not understood on any level and outside the cold assessment of science.

Here Gillespie presents a collection of such stories from the Great Plains states of the United States but particularly Colorado. Settings used come from all periods to the present including the now lost vagrant society of Des Moines and the eerie setting of the Four Corners area, ancient ground made famous by the modern coming together of four artificial state boundaries. It is a book about ghost towns, Native American ruins, modern highways, “vocational ghosts,” etc. The odd place can inspire a strange story of “mules that would refuse to move at the very spot the environment changed” and “flickering lights atop mesas.”

Some of these tales only take up space but the reader will not be bored with dry explanations of magnetic anomalies, circumstance disguised as coincidence, audio misunderstandings, hallucinations, etc. Scientists, professional treasure hunters, and experienced outdoors enthusiasts make for the scariest accounts because they know better than the average person when something is not as it should be.

Chronicles of the Unexplained does document how times have changed, such as how animal mutilations were once explained with Native American legends of shape-changers but now by corporate pharmaceutical experiments, cults, unidentified flying objects, and government weapons tests.

Someday this book will serve scholars as Chaucer’s Canterbury Tales or Boccaccio’s Decameron in explaining a long lost world in detail from the ground up, such as describing working operations in railroad yards, among the particularly good places to have strange adventures.

This book inspires each of us to keep our senses alert to the prospect of an encounter with Bigfoot, meeting a ghost in a hotel, or otherwise having an extraordinary event in an interesting place near or far. As the author notes “one conclusion I have come to is that we as humans still really don’t have a clue about anything.”