Chronicles from the Land of the Happiest People on Earth: A Novel 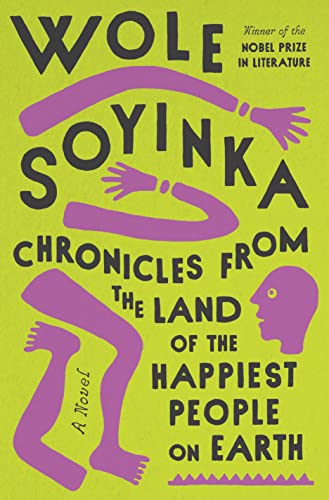 “The writing alone is a wonder and a fitting coda for the career of this great writer who led the parade of extremely talented writers coming out of post-independence Nigeria.”

At age 87, Akinwande Oluwole Soyinka, the prolific Nigerian writer and winner of the 1986 Nobel Prize in Literature, has published his third novel. This adds to his previous publication of six memoirs, seven poetry collections, and 25 plays, four of which were written for radio and television. Wole Soyinka was the first sub-Saharan African awarded the Nobel Prize in Literature. He is a writer; teacher; public lecturer, including the prestigious Reith Lectures; a political activist; commentator; and satirist.

Expectations, then, are high at the publication of his latest work. It does not disappoint with its remarkable cast of characters, complex plot, and intrigue and, above all, its searing satire.

The novel opens in the inner sanctum of Papa Divina, a self-created spiritual guide, where he functions as “Guide” to a “Seeker.” He identifies himself as the Prescience and intermediary to the Presence, the “One and Only.” If Papa Davina had a religious identity, it was what he called Chrislam with its capital located in Chrislamibad. If he had a theology, it was luxury and hedonism. His inspiration was the African American evangelist Father Divine.

The scene with this particular seeker, who is not identified, is full of light-filled theatrics featuring Papa Davina on a turntable. And so it begins.

Within the first 40 pages, Papa Davina’s world and his checkered past are laid out. He has an evangelistic show-business style coupled with the air of mystery and aloofness worthy of a holy man who is above, and yet serving, the masses. Today, it is a type ubiquitous on cable/satellite television. His following is large, loyal, and willing to support his luxurious tastes with extremely generous tithes and gifts. These, in fact, were required for an audience with the Prescience.

The leading political power figure is Sir Goldie, the only character who comes close to Papa Davina in public acclaim. He sits at the top of the state bestowing honors, scraping in the fruits of corruption and holding the power of life and death. He has access to a special, private, high quality supply of kola nuts, one measure of his standing.

The plot spins around four colleagues from university days in England. There they formed the “Gong of Four,” pledging loyalty to one another. After the four returned to Nigeria, they drifted apart. Three of the four, a doctor, an engineer, and a mathematical genius, are at the center of the main plot.

Of the three, Doctor Menka is a dedicated surgeon who is alarmed when he discovers a ring of dealers in human body parts. Duyole Pitan-Payne, an engineer, is too clever for his own good and will be appointed to a UN post, a form of exile. Badetona, a mathematical genius, is involved in a major financial/embezzling scandal. The fourth member of the “Gong of Four,” Farodian, seems to have disappeared and has lost contact with the others.

Dr. Menka and Duyole occupy the majority of the attention as the plot develops with its many tangents and twists along the way. There are a multitude of minor characters, both sinister and highly amusing. In the end, however, the main character of this rich story may, in fact, be contemporary Nigeria. At one point, it is reported that a former British colonial envoy had labeled Nigeria the “Most Extraordinarily Corrupt Nation in the World.” To counter this “outrageous” charge, Sir Goldie undertakes an international tour. On his return, he assures the nation that its number one position as the “Happiest Place on Earth” is no longer in danger. (He was, apparently, unacquainted with the claims of the Disney Empire.)

The main plot line moves the critique of politics forward, while the social milieu thickens. Chapter titles drawn from literature and pop culture give an indication of the humor: “The Rumble of the Humble”; “The Hand of God”; “The Gospel According to Happiness”; and “Pilgrim’s Progress” followed by “Scoffer’s Progress” to name a few examples.

Bribery and blackmail are common tools of the political world. Public holidays, such as “The Night of Nights,” celebrate those honored with such titles as “Yeoman of the Year”(YoY) or the “People’s Award for the Common Touch(Pact). None of these titles seem to have any particular qualifications but are handed out to massage egos and soothe minor politicians, and in the case of “YoY” to offer the public a voting opportunity. “YoY” became more popular than any Reality show and overshadowed the “Independence Day Honors List.” It was said by some to be the only example of authentic democracy in the nation.

Layer upon layer of these honor categories are created to fulfill the insatiable desire for more honors among those honored. The competition for the accumulation of honors spread across the landscape, and was captured in a popular book titled My Mercedes Is Bigger than Yours. Another Mercedes reference appears in the name of the creator of many of the honors, Chief Oromotaya Modu Udensi, the latter name evolving into “Ubenzy.” He is also the publisher of the aptly titled newspaper, The National Inquest.

The novel is loaded with these kinds of references and digressions as the main characters deal with a number of issues such as arson, family intrigue, and family dysfunction. Duyole and Menka reunite and, when Duyole suddenly dies, Menka becomes entangled in a quest to get to the bottom of the apparent murder. In the process, Menka finds himself embroiled in a maze of family conflicts and a wild struggle for disposition of the body, which it turns out is both a family and a political issue.

If this seems too convoluted and difficult to follow, it is. At the same time, it is more than worth the difficulty.

This is an extraordinary novel that is both in and of Nigeria. It contains elements of Yoruba culture and, in the middle of it all, is a gourd full of satire, humor and pathos. It is a chronicle of human folly among the happiest people on earth. The writing alone is a wonder and a fitting coda for the career of this great writer who led the parade of extremely talented writers coming out of post-independence Nigeria.