The Christos Mosaic: A Novel 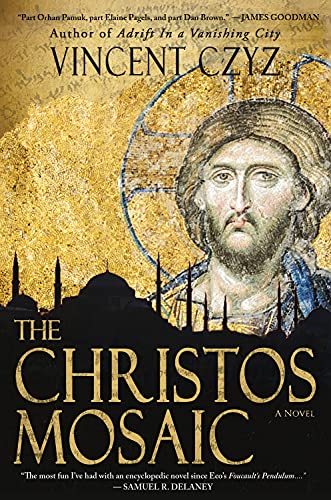 Not a religious novel, but a novel about religion, The Christos Mosaic by Vincent Czyz is a search for the roots of Christianity and the identity of Christ. Was He a real man, the Son of God, or was He a mosaic of several different historical figures?

While the search bears some resemblance to Dan Brown’s The Da Vinci Code, it is a superficial likeness restricted to the searchers versus a secret Catholic organization seeking to protect the traditional foundations of the Church. Like Dan Brown’s plot, there is violence, narrow escapes from danger, hidden clues, and exotic locations.

Unlike The Da Vinci Code, there are no nearly pure characters. Drew Korchula is an American ex-patriot living in Istanbul and teaching English, rather a slothful individual, who in the eyes of his family and his Turkish ex-wife, Yasemin, has never lived up to his intellectual potential. He struggles to come to terms with divorce and the part his anger issues played. “One other thing held him in Istanbul: it was easier to be a failure abroad. He didn’t run into old friends, and even when he flew back home for a visit, he had the air of an adventurer.”

Drew spends 20 hours a week teaching and the rest of his time reading. His GRE grades are high enough to be accepted in most graduate schools, but he has never applied. He may have continued living his life of failure and bitter regret, but a visit to Kadir the Turkish dwarf’s bookstore in the Sahaflat Charisi—the Market of Secondhand Booksellers—changes Drew’s life in ways he never imagined.

Kafir, an abrasive personality from a lifetime in which “he faced humiliations foreign to someone of normal stature,” is nevertheless a rather likable character who chases wealth and is not too careful about its source. His ultimate goal is to buy a boat and live happily ever after sailing peacefully and reading his secondhand science fiction novels. When Tariq, an Egyptian smuggler of antiquities leaves a box with Kafir for safekeeping, its contents ignite the dwarf’s thirst for money, and create a conflict between faith and knowledge for Drew.

Drew has the box, given to him to keep overnight because Kafir fears that Tariq may have been followed by a competitor, which he has. When Tariq dies while fleeing from strangers who want the box and what it contains, Kafir and Drew become targets. At this point in the story Mr. Czyz introduces Zafer, a former member of Turkish Special Forces, whose strength of character is in many ways the opposite of Drew’s. A friend of Kafir, Zafer has “a certain crude charm and a square jaw that belonged on a steam shovel—one you could probably break a knuckle on.”

Zafer and Drew open the box after a break-in at Drew’s apartment to find one of the dwarf’s secondhand science fiction paperbacks. Kafir explains that “To you I gave nothing. To them I gave an idea of you are given something.” That something that killed Tariq and leaves Drew and Kafir fleeing for their lives is a Dead Sea scroll, one that is unknown to scholars, one that reveals clues to the scroll known as the QDocument, which may or may not exist. It is supposedly a manuscript of, among other things, the sayings of Jesus, except the manuscript predates the life of Jesus by a few hundred years.

If the Sermon on the Mount and various parables attributed to Jesus were actually the words of someone who lived and died long before Christ was ever born, then who is Christ? Was he actually a historical figure or a mythical one around whom Christianity is constructed?

From Istanbul to Cairo to a gunfight at sea as Zafer and Drew flee the Catholic band who seek the QDocument, Czyz creates an exciting thriller, more eloquently written than most, but one which challenges the traditional religious faith of not only the Catholic church, but all Christian sects.

Czyz includes a timeline and a glossary of historical figures mentioned in his novel. Both will be helpful to the neophyte who lacks an extensive grounding in Biblical archaeology and Christian theological history. Childhood attendance at Sunday school will be helpful, but perhaps insufficient to follow the storyline.

The Christos Mosaic is exciting, exceptionally well-written, with an intricate plot, but Drew’s, and one suspects, the author’s conclusion that one should follow Emerson’s exhortation to “Let us demand our own works and laws and worship,” and to seek divinity in oneself is not one that will bring comfort to those of strong faith, traditional or more liberal. Given Paris and San Bernadino, a thoughtful person may wonder if there is any divinity to found in humanity.