China Through Time: A 2,500 Year Journey along the World's Greatest Canal 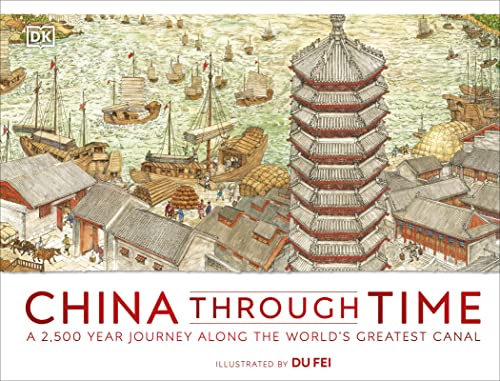 Incredible as it may seem, vast engineering feats were being undertaken 2,500 years ago that rivaled our most impressive modern marvels, bridges, skyscrapers, and aqueduct systems. The Chinese were among the best at building and can easily document their achievements from at least 486 BCE which is where this book begins. China Through Time includes a brief tour highlighting 14 stops along the massive 1,115-mile Grand Canal illustrating centuries of change and development.

Before anything particularly “Chinese” begins, the reader is introduced to Lihua the cat. We are told that she is naughty yet likes sleeping. She has a superpower and is able to time travel. She is hidden among the pictures and the reader is encouraged to locate her in each scene along the canal.

There is a brief introduction to the canal system as it relates to the history of China, emperors, kingdoms, and dynasties. We learn that the canal was intended to move goods around in order to encourage trade. A map corresponds to the table of contents, and we can see where each city is positioned along the waterway system. The listing is more or less in chronological and geographical order, but not entirely. It is not very clear why the chronology is inconsistent.

The southernmost point of entry is Hangzhou. Here the scene is depicting a thriving city with lush green countryside in the background based on life in the year 1185 CE (pages 12–13). Traveling northward we hit upon Suzhou and attend a night fair in the year 760 CE (pages 14–15). Moving northward again we stop at Yangzhou where the construction first began. We see throngs of workers, armies of warriors and slaves representing the year 486 BCE (page 4-5). Still moving north we jump to 1699 CE in Huaiyin in the middle of a torrential down pour with workers engaged in flood remediation (pages 16–17). This gives an idea of the style of organization, which feels quite random.

Taken as a whole, the illustrations are intricate, thoughtful, well composed and energetic. Each scene takes into account the types of people who would most likely have been in that setting, the kind of work they would be doing, the clothes they would be wearing, and the food they would be eating. Each page spread has a frame surrounding it with tiny cut-outs of certain images that the reader is lead to find within the scene. Some of the scenes are so jam packed it is difficult to locate the images. But descriptions of these images are engaging and illuminate life during that particular era. With a vast amount of history crammed into each scene, the details are almost overwhelming. The artwork being so small, differences are almost imperceptible, and many centuries look more or less the same.

From a design standpoint, the concept and framework of the overall project is well done and enhances the learning experience. With the exception of the superimposed text into the scenes. Each scene identifies certain attributes with text labels such as—soldier, beggar, porter, salted duck egg seller, etc. Labeling is good because all of these elements are otherwise indistinguishable and, again, they are so tiny it’s impossible to see the miniature nuances. The problem with this text is that it too is impossible to see and is mostly lost amid the crowded pictures. More care should have been taken to include the text as a design element and help it fit in with the artwork cohesively instead of being drowned out by it.

Sadly, our little cat, Lihua, is, by the third page, completely forgotten. There is too much hunting for the other images in each scene frame to even remember to look for her. And, frankly, she is too small and too hard to find. Hints at the back of the book are more of a riddle than an answer and in more than one scene she was nowhere to be found. It would have been helpful and less frustrating to actually spotlight where she was hiding. It is not clear how much value she added to the Grand Canal story.

China Through Time is, however, clearly an artistic labor of love. It’s an ambitious project meant to expose 7 to 11 year olds to the immense amount of history China offers to the world through action packed images based on one of China’s great engineering achievements.