Checkpoint Charlie: The Cold War, The Berlin Wall, and the Most Dangerous Place on Earth [Review II] 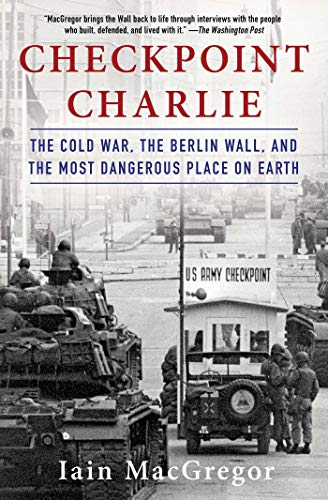 “The Cold War needs more great histories like this to show what a truly remarkable time it was, a period of nuclear terror, constant hair-trigger tensions, and the human drama of decisions made by ordinary people that could have truly global ramifications.”

A generation has come of age in Europe and the United States with no memory of the Cold War. To this generation, the Berlin Wall and Checkpoint Charlie are merely historical terms or an anachronism on display in museums as chunks of brick and concrete. But as this timely and well written book lays out that although the wall came down 30 years ago it was not a foregone event, but the culmination of a nearly 40-year standoff along the Iron Curtain separating Communist from Free Europe.

After World War II, Berlin was a conquered and occupied city, split into four zones controlled by each of the major victors over Nazi Germany. In the late 1940s, as the Communists seized power in the Eastern European counties occupied by the Soviet Union and began the repression of their citizens, the Allied occupied area of West Berlin became both a symbolic measure of Western resolve and a practical entry point for thousands of East Germans seeking freedom in the west.

As the author relates using numerous first-hand accounts of both East and West Germans (terms that may seem foreign to many readers), British, Americans, and even Russians this was a perilous time for world peace as the Cold War hardened and Berlin became both a major flashpoint and a front-line outpost of freedom in the communist state of East Germany.

The immense flow of refugees from East to West Berlin finally prompted the East German government, with the support of their Soviet masters, to erect a wall around West Berlin in August 1961, not to keep it residents in, but to keep East Germans from getting out. For the next 28 years, the wall became the symbol of Communist oppression, with Checkpoint Charlie, one of the major crossing points and ground-zero for Cold War tension, one of the few places that American and Soviet armies literally had tanks pointing their guns at each other for several dangerous days of October 1961.

Berlin was also ground zero for a fierce espionage war between the various powers, with some of the most daring missions of the Cold War carried out by a holdover of the original Four-Power Pact that divided the city. Each side was allowed to send military missions to monitor activity around Berlin, and the American, British, and French military missions became essentially military intelligence officers with diplomatic cover that could spy behind the Iron Curtain, seeking information of Soviet and East German military forces, dodging Communist security and military forces with sometimes deadly results such as the death of Major Arthur Nicholson in 1985.

The wall was also a human tragedy, and the author provides some gripping stories of how East Germans tried to escape the increasingly hardened wall, sometimes with daring ingenuity and sometimes deadly consequences. The author makes a point of listing the names of over 100 East Germans who were killed by their own countrymen for seeking freedom from a Communist dictatorship.

The visit of John F. Kennedy to Berlin in 1963 with his “Ich bin ein Berliner” moment rightly received a great deal of coverage by the author, but strangely Ronald Reagan’s 1987 “Mr. Gorbachev, tear down this wall.” speech did not. This seems like a major oversight since this moment during the burgeoning time of perestroika and glasnost must have had a major effect on the East German people seeking to partake in the newfound freedoms blooming throughout Eastern Europe.

The final chapters dealing with how the occupying powers, Germans, and even Soviets dealt with the fall of the East German communists, the opening of borders along the Iron Curtain, and eventually the spontaneous opening of the checkpoints and eventual tearing down of the wall are powerful reminders of the remarkable peaceful transition of power and fairly swift unification of Germany, something many Europeans truly considered impossible.

The Cold War needs more great histories like this to show what a truly remarkable time it was, a period of nuclear terror, constant hair-trigger tensions, and the human drama of decisions made by ordinary people that could have truly global ramifications. The brave East Germans who lived through this particularly troubling era should especially be remembered, especially those who risked death from their own countrymen to flee to freedom.