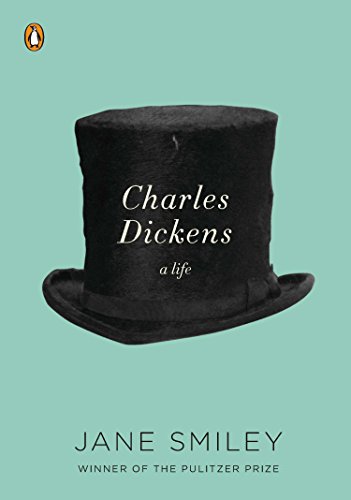 “Charles Dickens: A Life is a fascinating journey through some of the most mesmerizing and memorable characters ever created—David Copperfield, Oliver Twist, Little Nell, Scrooge—and thus a journey through Dickens’s life. It is a serious book for the serious reader, writer, or ardent Dickens fan, and it is one that should not be missed.”

For those with a fascination for the author Charles Dickens, a veritable feast looms as the centenary of his birth next year brings with it a plethora of books about the great writer. Jane Smiley’s book, Charles Dickens: A Life, examines each period of Dickens’s life in relation to the books and essays he was writing at the time.

This format works particularly well not only because it follows a logical timeline, but also because a piece of Dickens, or some element of his life, is encapsulated into every character he created. The reader is thus given a great insight into the complex, ever evolving man who has been regaled as the first great “literary celebrity.”

As well as writing 15 novels, Dickens still found time to champion a charity for “fallen women” and father 10 children in 16 years with his wife, Catherine.

Ms Smiley describes Dickens as a modern man “whose essential quality was the desire for freedom of thought and action.” To be a writer of novels satisfied this quality, as he was able to write in his chosen medium—the novel—with great freedom, while remaining acutely aware that the reader was also free to simply close a book, or choose not to buy the next part of his work if it was published weekly or monthly in magazines.

A wealthy man from his twenties on, Dickens was also an intensely secretive man who fastidiously compartmentalized his business and private lives.

The performer in him meant he was in his element giving animated public readings of his work, bringing entire audiences to their feet or weeping on their knees; however, so guarded was he about his private life, that his relationship with the actress Ellen Ternan and her place in his life “did not emerge at all until 1934” and to this day, no biographer has come up with a hard and fast answer to the “platonic or not?” question.

Dickens was far more than a gifted and prolific writer. At an early stage in his life, he grasped that “life is transformed by an inner shift that is then acted upon—not by a change in circumstances.” He never lost sight that more than charity was needed to really change the harrowing lives of the poor—something he had experienced personally as a boy.

For a seemingly typical Victorian family man, his views were radical, extolling as he did the need for a change in attitudes to change society. His book Little Dorrit was described by George Bernard Shaw as “a more seditious book than Das Kapital”! But his books also defined the era his readers were living in, with all its energy, filth, unfairness, and fun.

In his lifetime, Dickens created a literary world around himself. Ms Smiley observes that “writers who lived during his lifetime (and just after) felt they had to define themselves in relationship to him.” In this way Dickens raised the literary bar far higher than if he had simply produced a collection of excellent novels himself.

Other writers drew on his work, his mistakes and his successes and as a result, the craft of the novel has gone from strength to strength. As Ms Smiley writes: “That he combined his artistic vision with social action in an outpouring of energy and hard work is the root source of his uniqueness.”

Charles Dickens: A Life is a fascinating journey through some of the most mesmerizing and memorable characters ever created—David Copperfield, Oliver Twist, Little Nell, Scrooge—and thus a journey through Dickens’s life. It is a serious book for the serious reader, writer, or ardent Dickens fan, and it is one that should not be missed.