Charles Darwin's On the Origin of Species: Words That Changed the World 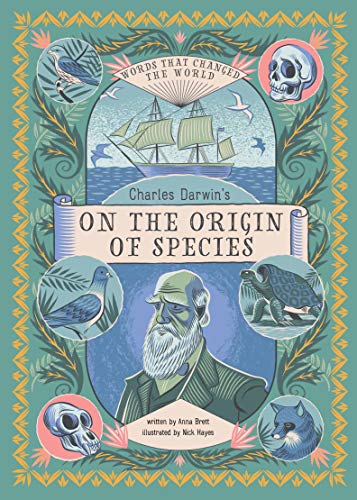 “Exactly what’s needed to inspire the next generation of scientists.”

In this beautifully oversized book, Anna Brett clearly presents Darwin’s revolutionary theory of evolution, complimented with rich illustrations by Nick Hayes. Brett does an excellent job of explaining the basics of Darwin’s radical thinking, beginning with how he landed on his theories in the first place during a five-year trip aboard the HMS Beagle as a naturalist.  “By the end of the voyage, Darwin had sailed 40,000 miles, explored over 2,000 miles of land, and collected more than 5,000 specimens!” During his travels in the Galapagos Islands, “Darwin began to wonder whether animals from mainland South America had somehow reached the Galapagos Islands and then changed as they adapted to life on the islands.”

The careful observations Darwin had made led him to describe “evolution as ‘descent with modification.’ This was based on the idea that members of a species share a common ancestor and that a species can change over time, potentially leading to the creation of an entirely new species.”

Brett goes on to explain what a species and variations are, how adaptation works, and how the theory of “natural selection,” grew out of these concepts. Brett is strongest when talking about the science, and she ably sets Darwin’s ideas in the context of the rival contemporary scientific theories. She’s less good about the cultural impact of Dawin’s theories, which were passionately opposed by many as being a form of heresy against Christian scripture. The famous 1860 Huxley-Wilberforce debate, where a supporter of Darwin’s theory of evolution, Thomas Henry Huxley, debated its merits with Bishop Samuel Wilberforce, is sadly missing. Wilberforce mocked Darwin for suggesting that peoples’ ancestors were apes or gorillas. Huxley’s tart answer has gone down in history when he retorted that he would rather be related to an ape than a man like the bishop, who favored orthodoxy over scientific truth.

The “insult” of claiming a common ancestor with apes is hinted at by the Hayes’s art, an illustration of a chimp hugging Darwin in a newspaper feature. But there’s no mention of the scandalous idea of a link between humans and apes, a strange absence in such a wonderfully thorough book.

But this is a historical quibble, given how well all the science is explained, both by giving interesting examples and by showing different kinds of modifications, from the beaks of finches to the hooves of horses. What is particularly impressive in Darwin’s work is that he came to his theories without knowing anything about genetics. This is truly astonishing, and Brett does a superb job of laying out the implications: “While Darwin’s ideas about evolution through natural selection were correct, there were certain areas of his theory—especially how variations occur—that he did not fully understand. A lot of this was down to the fact that scientists in the 19th century did not have the technology that we have today to look at the genetic makeup of plant and animal cells. It wasn’t until the discovery of the structure of DNA in 1953 . . . that we really began to understand more about genetics and heredity.”

The book takes the science into present day, asking what we know now and what remains to be discovered. Books like these are exactly what’s needed to inspire the next generation of scientists.