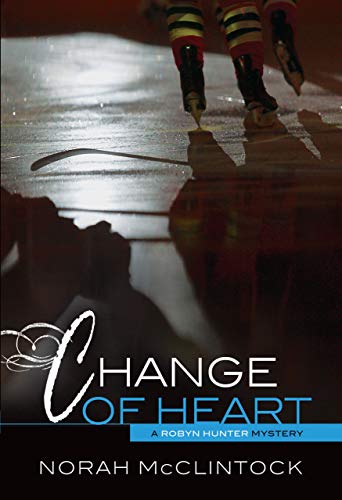 “Norah McClintock has found a formula that works.”

This YA mystery centers around a popular sport: hockey. And since the author resides in Canada, it seems natural that she should pick this game to create a well thought out plot and believable characters for her seventh book in the Robyn Hunter Mystery series.

Norah McClintock is an award-winning young-adult fiction writer. A five-time winner of the Crime Writers of Canada’s Arthur Ellis Award for Best Juvenile Crime Novel, she has been nominated for the Anthony Award for Best Young Adult Mystery. Change of Heart demonstrates why Ms. McClintock has received such high praise.

The story involves a high-school star hockey player who seems to have everything going his way. Most of his fellow players, coaches, and fans agree that Sean Sloane is destined to play in the NHL. In fact, they believe he will be as good as, or better than, the “Great One,” Wayne Gretzky—that is, until Sean is found murdered at the ice rink early one morning.

Despite the fact that it would be logical to assume Billy murdered Sean out of jealousy, and that the physical and circumstantial evidence points to that conclusion as well, Robyn is nonplussed and begins to dig deep.

To her credit, Ms. McClintock expertly weaves several other suspects into the mystery until what once seemed certain becomes at best ambiguous. Change of Heart is well written with interesting characters that should attract readers of both genders.

Norah McClintock has found a formula that works.