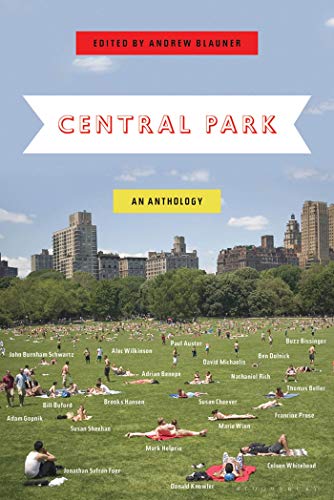 “When I was in college, I had a summer job, perhaps my most interesting summer job, as a pushcart vendor in Central Park,” begins Andrew Blauner in the introduction he as written for the new work he edited, Central Park: An Anthology.

“It was an enormous pushcart that belonged to the Front Porch restaurant on the West Side of Manhattan. This was in the summer of 1976, the summer of the Bicentennial celebration, the tall ships, and fireworks, when disco was ascendant and A Chorus Line opened on Broadway. It was a summer when NUYC was mostly grimy and decrepit, with stifling subway cars covered in graffiti, but there were signs that not all was lost. . . .

“Every day, I would get my cart and fill it up with tureens of cold soup and interesting fruit breads and push it—all six hundred pounds of it—from West Eighty-second Street to Fifty-ninth Street. I sold food at lunchtime at the south end of the park, and then, after lunch, I pushed the art to the Delacorte Theater, outside of which I sold food at dinnertime. Though the cart lacked a Parks permit and the restaurant did not inform me that I needed one, no one enforced the rules at that time. There was a passel of other vendors selling creative food, and a few classic hot dog/pretzel guys who likely had permits. Every once in a while a police officer would show up and shoo us away, but we could come back and sell our soup, falafel, or tacos…

“We banded together and enjoyed friendly competition, except for the two hot dog guys, who once had a fight that ended with one stabbing the other in his arm with a large hot dog fork.”

Mr. Blauner, who, in the past has edited two anthologies on subjects related to people and their relationships (brothers and coaches were their topics), this time has gathered his material on the subject of a place. As he puts it:

“Central Park is like baseball in the sense that it continues to change but remains, in essence, very much the same. There are many paradoxes of the park; it divides, as it physically (separating East Side from West Side), but also unites us, just as it somehow simultaneously defines and defies the city.”

In celebration of Central Park (for no specific reason—no holiday or anniversary—but simply because the park is the emerald heart of New York), our editor has gathered together some of New York’s finest, when it comes to writers—journalists, novelists, memoirists, biographers, critics, purveyors of short fiction, and many, many writers for the New Yorker, even children of writers for the New Yorker—each apparently given the task to, in some creative way, explore what the park means to them personally.

Most rise to the occasion, giving this collection a lovely golden gloss of memories buffed and displayed for our pleasure.

Certain these quickly emerge. One of these, memories of animals in the park, gives us the two finest pieces in the collection.

“Years ago—when I still thought that a writer was something that you could simply declare yourself to be, like a vegetarian—I took a summer job at the Central Park Zoo. At last, a subject!”

Not quite Out of Africa, but close. Mr. Dolnick’s tale centers on his relationship with a goat, introduced as follows:

“The one animal whose existence gave me hope that the zoo might in fact be worth writing about, was named Newman. He was a Nubian goat, pure white, and about the size of a donkey with an extra-long neck. He had no horns and a pair of softly furred wattles hanging from his neck looked like jewelry. He wasn’t fond of his keepers, but he was the one it was the least difficult to imagine being fond. When I would sit on one of the tree stumps that were scattered through the goats’ pen like chairs in a waiting room, he would come over and poke his nose into my pockets in search of food. If he suspected that I was still holding out on him, he would begin to climb, on his knobby elbows, into my lap. Sometimes I scratched the place on his back that I was sure he would have scratched if he had horns, and he would reward me by baring his little teeth in pleasure.”

In time, Newman and Dolnick become close enough that the writer keeps a picture of the goat on his desk as he works. Still, the love between the two remains elusive:

“I can’t quite account for why I felt so much warmer toward Newman than I did toward the rest of the animals. His silence may have had something to do with it (the rest of the goats were constantly belching/screaming), or it may have just been that, like Tom Hanks with his volleyball in Cast Away, I needed to make a friend of at least one of the nonhumans with whom I was for the time being stuck.”

The other standout, “The Hidden Life,” by Alec Wilkinson, features a form of wildlife that flourishes in the park, turtles:

The turtles in Turtle Pond are mainly, and perhaps entirely, thrown-out turtles. Generations of owners have abandoned them, when they felt they could no longer keep them, I guess, so you have breeds that you are not likely to find anywhere else in New York State, or even the Northeast. The most numerous breed is the red-eared slider, the green turtles with red stripes on their ears which pet stores sold as hatchlings, until it became illegal to, although sometimes you still se them in the fish stores in Chinatown.”

Wilkenson’s work features a lifetime of memories of his relationships with the turtles of Central Park, as well as positive proof that the water in Turtle Pond does not carry typhoid.

Water is a constant image in the anthology—the reservoir looms large—as do images of sudden violence (muggings, in the late ‘70s and early ‘80s especially), and the ongoing generosity of New Yorkers. Paul Auster’s “Fogg in the Park,” for instance, tells of a homeless man who is fed by strangers. It also relates the story that most resonates, as it is part and parcel with the mythic New York, the idea of actually living in Central Park:

“There was no question that the park did me a world of good. It gave me privacy, but more than that, it allowed me to pretend that I was not as bad off as I really was. The grass and the trees were democratic, and as I loafed in the sunshine of a late afternoon, or climbed among the rocks in the early evening to look for a place to sleep, I felt that I was blending into the environment, that even to a practiced eye I could have passed for one of the picnickers or strollers around me . . . Each day, I became a little dirtier than I had been the day before, a little more ragged and confused, a little more different from everyone else. In the park, I did not have to carry around this burden of self-consciousness. It gave me a threshold, a boundary, a way to distinguish between the inside and outside . . . The park did that for me. It was not quite a home, perhaps, but for want of any other shelter, it came very close.”

Also beautifully burnished is the brief memory presented by Susan Sheehan in “Sunday in the Park with Mother:”

“Sunday—that was Central Park Day, and although we must have gone there dozens of times, those Sundays in the park with Mother had a joyful sameness. The weather surely varied, but in memory it is quite sunny and cool but not cold. We are dressed in jackets or coats. I am carrying a paper bag of three-day-old bread for feeding the birds. If we are walking, I scatter breadcrumbs, in the manner of Hansel and Gretel, on the six-sided pavement stones that are to be found on the west side of Fifth . . . My pockets are filled with cubes of sugar for the horses I hope to encounter in the park or on the way there and back (and often did).”

There are a couple duds along the way. Second-generation author Susan Cheever still seems unwilling or unable to do much more than spread her Daddy issues around the page like finger paints. (Her father was novelist and New Yorker staple John Cheever, but still . . .) She manages to write more about the obligatory (for her) Westchester County than about the park. And Marie Winn’s open letter to Holden Caulfield, “About Those Ducks, Holden” is a bit cloying, if thankfully brief.

But by and large, the writers voices ring clear, if a bit melancholy at times, in remembering New York, their youth, and Central Park, and the reader has as sunny a time in reading this as he would if out on the Great Lawn come June.

In his Editor’s Note, Andrew Blauner comments, “Anthology is defined as a bouquet of flowers. I hope that you have enjoyed the array here.”

This reader most certainly did, Mr. Blauner. He found them to be worthy of the bouquets that could be gathered from the bounty within Central Park itself. And that is quite an achievement.