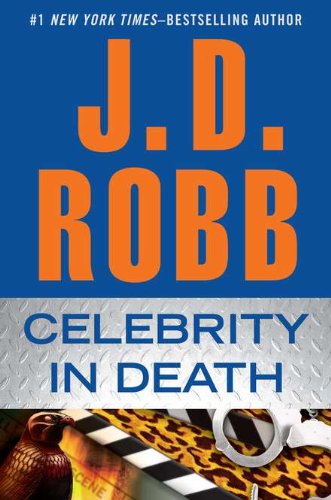 “Following this couple through their adventures offers readers book after book of entertainment and emotional satisfaction. If Ms. Robb keeps up her multi-books-a-year output, there will be many more to look forward to—each as good as or better than the last.”

Nora Roberts is not only one of the most prolific writers of her generation, but also reliable in delivering what her readers want: engaging, character-driven romances across several genres. In her “In Death” series, written under the nom de plume J. D. Robb, she blends science fiction and police procedural with romantic suspense in a snappy style that’s almost impossible to put down.

Celebrity in Death, the latest entry in the series, is number 34 and still going strong. Like all of the volumes, it is set in New York City in the near future (2060), and features Lieutenant Eve Dallas and her husband, Rourke, supported by the usual sidekicks.

This book is best enjoyed if you’ve read at least one previous volume so to comprehend the basic backstory, get the in-jokes, and appreciate the character interplay. With that background, it’s easy to laugh out loud at some of the dialogue and not be bewildered by references to past events; without it, certain scenes may seem shallow or confusing.

The series in general swaps between plots focusing on crime and plots focusing on backstory—though all the volumes are carried by Eve and Rourke investigating evil doings. This couple might be unique in literature in the duration and complexity of their love affair.

Here’s where their backstory becomes important: Lacking that familiarity, readers may find it hard to believe Eve and Rourke’s enduring passion or be able to understand their conflicts. As well, the couple is larger than life so they need to be rendered in contradictory, realistically human terms in order to be accepted by readers and supporting characters alike. Ms. Robb excels at this aspect of writing craft, accounting for much of her success.

In Celebrity in Death, Eve and Rourke suffer no vital relationship conflicts and their personalities hold consistent. This story is a straightforward procedural with Eve in her “all cop” mode and Rourke wearing his “civilian consultant” hat. They continue to deal with private issues lingering from the past but those just flesh out the story, not dominate it. Instead Eve is a bulldog on the case—this time a weird one, in which she must investigate the murder of the actress playing Eve’s partner, Peabody, in a movie about one of Eve’s most notorious cases.

Eve is the celebrity referred to in the title, and her cynical observations about Hollywood and the glitterati are totally in character and provide some of those laugh-aloud moments. Readers who know Eve (et al.) will fall more deeply in love with her (and them), whereas readers meeting the cast for the first time may need the length of the book to grasp character and milieu well enough to join the crowd of loyal fans.

Ms. Robb sustains her signature writing style with sassy contemporary dialogue, acute insights about people, and steady pacing of the action. The love scenes between Eve and Rourke come along at predictable intervals, but each has a different flavor and serves to deepen their relationship.

Ms. Robb continues to alternate viewpoints between them during their interactions, especially in bed (or in the shower, on the floor . . .)—another element that characterizes her novels. It keeps the love story central, even if romance is subdued for a particular volume.

Celebrity in Death deviates from series pattern in its lesser violence. As Eve observes, “[N]obody tried to punch me in the face, stab me, stun me, or blow me up. I think it’s a record.” Less violence, however, does not mean less suspense. Eve’s cup runneth over with suspects at first, and the book concentrates on winnowing them down to the obvious, whom she then has to ensnare and prove a case against. This is tricky with superstar celebrities and requires sensitive politics—never Eve’s forte. But with the aid of her supporters, driven by her determination and integrity, she adds another successful investigation to her record.

Though there must be men who enjoy this series, it’s aimed squarely at women. Eve Dallas provides a heroine for our era—strong and smart and moral (without being moralistic), capable yet vulnerable, tough yet sensitive (without being absurdly idealistic)—while Rourke, similarly endowed, brings many a female’s fantasy to life.

Following this couple through their adventures offers readers book after book of entertainment and emotional satisfaction. If Ms. Robb keeps up her multi-books-a-year output, there will be many more to look forward to—each as good as or better than the last.