The Cause: The American Revolution and its Discontents, 1773–1783 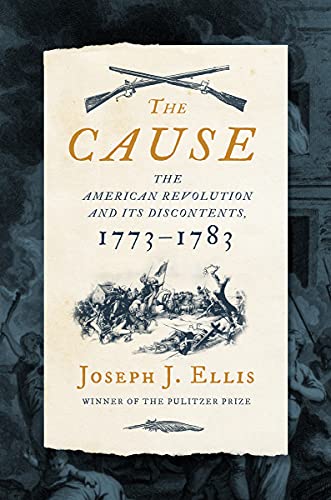 “The Cause comes across as a special gift, the book the author most wanted to write to the reader from the great scholar.”

Ellis argues that “the American Revolution succeeded because it was not really a revolution” “which means it succeeded because it failed.” It gave America independence but did no meaningful change on such important continuing issues as the Indian removal, slavery, and much more. Ellis builds his work on facts but the author still asks how things might have gone differently.

Within each chapter, the author illustrates major points with “profiles of certain players—women and men, black and white” “from the top to the bottom of the social scale.” Ellis draws them from the second tier of the famous among the founding Fathers and Mothers.

Prominent figures of the time such as John Adams, Benjamin Franklin, and Thomas Paine do appear. Some persons deserving better remembrance, such as John Dickinson and John Glover, also have places in this concise narrative. Modern scholars find frequent mention too.

Ellis argues “so they say, chronology is the last refuge of the feeble minded, but the only reliable refuge for the historian.” In The Cause, the author gives a chronology that never loses the reader’s attention by using a prose that is simple, carefully crafted, and engaging. Even knowing the ending, the reader can wonder what comes next.

The book begins with the 1760s acts intended to help Britain to pay for its expansive victory in the Seven Years War and to keep the costs of its great new empire down. It follows through the campaigns of Boston, New York, Charleston, and Chesapeake. Errors appear in the details of the Southern Campaigns.

Ellis blends the military with the political and social from the well-intended efforts on both sides of the Atlantic to find an amicable solution to the misguided efforts to conquer Virginia. The author argues that “perhaps for the first time,” the reader might also “grasp the British side of the story.” Spirited opposition in Britain failed to stop the government’s policies by such leaders as William Pitt, “the most distinguished, if ailing, statesman in Great Britain.”

Overwhelming sentiment against America in Parliament made the coming conflict inevitable. At the same time, “several thousand less prominent and less visible Americans going house to house enforcing allegiance to the Cause” “became the ultimate arbitrators” of what it all really meant by the summer of 1776.

This work does not overlook the African American through the histories of John Laurens, Henry Washington, and others. Joseph Brant, Mohawk chief, has a profile, and Native Americans in general find mention in the book’s epilogue. Disease plays a role on an individual and on a large scale.

In an epilogue, Ellis discusses the blame passed around in Britain, then the consequences of the American Revolution such as on the Loyalists, women, and slavery. The Cause comes across as a special gift, the book the author most wanted to write to the reader from the great scholar.

Such a concise book does not cover more than major points carefully selected by the author. The Cause covers the discontent with many questionable policies and strategies of the king’s government. It does not, however, really discuss the failed ideas behind the important Saratoga Campaign except in passing.

The concerns on both sides raised by the first failed attempts at military cooperation between America and France find no mention The Cause also so does not cover the complexities and conflict over Spain clandestine and indirect influence over the American Revolution. The book has annotation and maps.