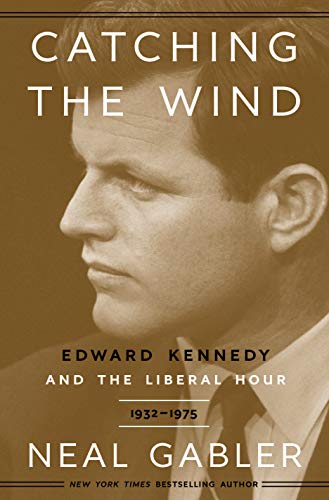 “As a chronicle of the decline of American liberalism from the time of Ted Kennedy’s birth at the dawn of the New Deal to the collapse of its ethic of activist government in the 1970s, Catching the Wind transcends the limits of political biography . . .”

In Catching the Wind: Edward Kennedy and the Liberal Hour, Volume 1 of a projected two-volume life of longtime Massachusetts senator Edward M. “Ted” Kennedy, Neal Gabler begins at the end—Kennedy’s 2009 funeral—and with an audacious claim: “Ted Kennedy had become the most consequential legislator of his lifetime, perhaps in American history.”

What makes Gabler’s assertion particularly bold is that Kennedy’s long and eventful life appears, from a distance, marked as much by failure, tragedy, loss, disappointment, and error as success and triumph. As many have remarked, unlike his revered brothers, all of whom died young and under tragic circumstances, Ted Kennedy spoke in prose, not poetry; he also survived long enough to be judged entirely on his accomplishments, not his potential or promise. As Joseph Kennedy Sr., the father who demanded that his sons fulfill his sky-high ambitions—and simultaneously modeled the serial personal indiscretions to which he believed they were entitled as Kennedy men—once told Ted, be careful, because “you can’t get away with anything.” What bounces off the rest of us, the elder Kennedy seemed to suggest, sticks to you.

In Gabler’s hands, Kennedy’s life unfolds as a frenzied, complex, dramatic, and messy affair, that of a man driven to tireless public service but prone to perplexing self-destruction and characterized by singular legislative genius that revealed itself only in everyday practice. But Catching the Wind is as much the story of the liberal wind Kennedy caught at its final peak and worked to harness in the years of its dissipation as it is an account of Kennedy’s own life. In that sense, Catching the Wind matches the undeniable ambition of its subject at every step.

The last 18 months have yielded a bounty of fine books about the most compelling and confounding of American political families. The offerings range from the grandly ambitious—Douglas Brinkley’s American Moonshot: John F. Kennedy and the Great Space Race—to the predominantly biographical, the brilliant Volume I of Fredrik Logevall's life of JFK—to All This Marvelous Potential, which aims to contextualize Robert Kennedy's two-day “poverty” tour of Appalachian mining country in Eastern Kentucky shortly before he announced his 1968 run for the presidency.

Catching the Wind—ironically, given its focus on the last Kennedy son, also tagged from the outset as least among his brothers—towers above them all. As a chronicle of the decline of American liberalism from the time of Ted Kennedy’s birth at the dawn of the New Deal to the collapse of its ethic of activist government in the 1970s, Catching the Wind transcends the limits of political biography to a degree matched only in recent decades by Robert Caro in his majestic biographies of Lyndon Johnson and Robert Moses, David Levering Lewis in his two-volume life of W.E.B. DuBois, and T. Harry Williams in his path-breaking biography of Huey Long. As a profoundly and sharply revealing portrait of the evolving machinery of American legislative governance and one senator’s struggle to harness it and play its changes in the 1960s and early ’70s, Neal Gabler’s Catching the Wind proves every bit as worthy a sequel to Master of the Senate as Caro’s own The Passage of Power.

Gabler, in fact, makes the connection explicit: “In telling the story of the decline of liberalism, then, these two volumes must also tell the story of the delegitimization of a certain set of moral values and a certain kind of social responsibility and their replacement by another set and another kind. It is the story of political morality and how the country lost the liberals’ idea of it. In writing of Lyndon Johnson, Robert Caro has said he is writing about power. In examining the life of Ted Kennedy, this book is about political morality.”

One of the critical points Gabler makes in Catching the Wind is that all three of the Kennedy brothers who lived to launch the political careers their father envisioned for them were drawn into the canon of liberal icons (something their father never imagined or endorsed) by the deaths of Jack and Bobby. “For if nothing so liberalized John Kennedy as his death,” Gabler writes, “nothing may have so liberalized the country as the shock of his death.” So, too, his younger brothers.

Indeed, Gabler asserts, JFK proved considerably more liberal in memory than the deft cold warrior he was in life. Without question, John F. Kennedy's views and priorities evolved and changed throughout his life and his presidency, and certainly his commitment to civil rights sharpened and intensified in 1963. But one of the most revelatory elements of American Moonshot is Douglas Brinkley’s extensive recounting of the prolonged Socratic dialogues Kennedy shared with NASA's first top administrator, James Webb, on national fiscal priorities and NASA's potential role in helping to prosecute the Cold War, particularly through the pursuit of a crewed space flight to the moon. At one point, Kennedy assured Webb that the moonshot was his administration’s highest priority—or rather its next-highest, second only to defense.

Gabler also ably chronicles Robert Kennedy’s leftward shift following the shock and heartbreak of JFK’s assassination, up to and including his “moral crusade for the presidency” in 1968. He demonstrates how the two surviving brothers alternately acted as partners and rivals in the relatively brief time (1965–1968) the two spent together in the Senate. Gabler makes a compelling case that this interval was not just tragically cut short by RFK’s death, but also inevitably limited by what JFK biographer and Kennedy intimate Arthur Schlesinger described as the older brothers’ innately “executive” temperament—a dearth of patience for the horse-trading, partnering, relationship-building, cajoling, and compromise required to get things done in the Senate. With Ted’s more personable and “parliamentary” temperament—in many ways, Gabler argues, formed in childhood in his designated role as family comedian and conciliator—he fell more naturally into bipartisan Senate collegiality (still a thing in those days) and the need to nurture uneasy alliances.

At many of its best moments, Catching the Wind illustrates not only how Ted Kennedy achieved a legislative mastery on par with LBJ’s but entirely different in character, but also how the composition and climate of the Senate of the 1950s so magnificently portrayed in Master of the Senate changed with the decline and passing of the old Southern bulls in the 1960s and ’70s, and how Ted Kennedy acclimated himself to the bull-dominated hegemony of his early years and rose to prominence among the shifts that followed.

If Jack and Bobby spoke in poetry and Ted spoke in prose, Neal Gabler writes with energy, precision, and elegance that brings every episode he chronicles vividly and often thrillingly to life. Perhaps nowhere are his gifts more in evidence than in his transition from outlining the characters of the candidates for the presidency in 1968 to his deep and direct focus on Republican nominee Richard Nixon, “a virtuoso of resentment,” who would dedicate his campaign and his subsequent presidency to an all-out assault on liberalism’s moral authority, the demolition of the post-war liberal consensus, and the already fraying New Deal coalition. In this prolonged pitched battle, Ted Kennedy would prove Nixon’s nemesis and foremost foe, carving out a role for himself as a sort of “shadow president,” launching an alternative political program from his position in the Senate during the Nixon years.

“The Senate bulls had stymied much of John Kennedy’s agenda,” Gabler writes. “But while Ted was erecting his own stop signs, this wasn’t just stymieing presidential initiatives. This was working on an entirely new agenda—a liberal alternative to Nixon’s. Not even Lyndon Johnson as majority leader had dared something so audacious as to use the Democratic caucus in the Senate as an alternative government. Thirty-seven-year-old Ted Kennedy would try.”

And once again, the death of a brother and the burden of family legacy proved as important to Ted’s commitments as they had for Bobby before him: “And while his presidential prospects played a role in his aggressiveness—even if he wasn’t quite sure whether he wanted to be president or to become a Senate eminence instead—there was that other motive, a far more powerful motive, that explained why he suddenly transformed into a firebrand and that explained his newly energized liberal proclivities, a motive that engulfed him, a motive that was bred into him as a Kennedy in the Kennedy succession and as a brother whose devotion was boundless: It was for Bobby.”

Even as it highlights Ted Kennedy’s high-minded and skillful work in the Senate, Catching the Wind doesn’t sidestep or soft-pedal his personal failures and shortcomings, from his reckless and relentless philandering to the catastrophe of Chappaquiddick. But the emphasis remains on his political life, and its tremendous impact on his times.

As the first of two volumes, Catching the Wind has to stop somewhere, and Gabler finds an appropriate endpoint just after Watergate, at a suitable low point for liberalism: the ugly battle over busing in Boston, which put Ted Kennedy at odds with his homegrown Irish-American constituency and eroded his local hero cachet by casting him as an unlikely symbol of liberals’ betrayal of the white working class.

Just ahead remain liberalism’s unconditional surrender amidst the mass deregulation of the Carter years, and Ted Kennedy’s unsuccessful primary challenge to Carter in 1980 as a last gasp for liberalism and an ominous preamble to the election of Ronald Reagan. Jon Ward’s propulsive Camelot’s End: Kennedy vs. Carter and the Fight that Broke the Democratic Party (2019) will continue to serve ably as the go-to take on that dispiriting campaign.

But Neal Gabler leaves readers much to look forward to, if the next volume of his Ted Kennedy biography proves anywhere near as much of a barnburner as the first.