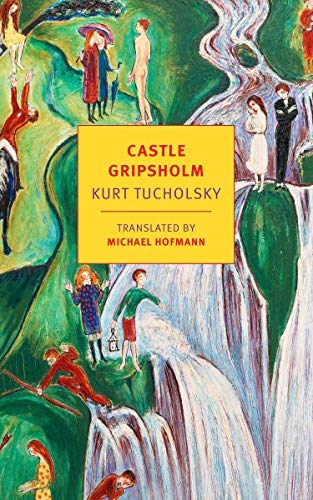 It begins with an exchange between a narrator referred to as Tucholsky; a writer, and his publisher, who is suggesting he write a short love story. Herr Tucholsky replies, “A love story . . . but, my dear master, how could I possibly? Love in the present climate? Are you in love? Is anyone in love these days? I’d rather write a little summer story.”

And for that, the timing is right, as the writer is about to go on a five-week sojourn to Sweden with his current girlfriend/partner/lover Lydia, whom he refers to as the “princess.”

They set out from Berlin to Copenhagen to Stockholm and, by then, the princess is so tired she does not want to travel another kilometer. She declares—everything she says seems to be, to the narrator, a declaration of the utmost importance and insight—they should “find a very cheap little cottage and stay there very quietly.”

They find one with rooms to sublet on the grounds of a castle in Mariefred, a “tiny little place on the shores of Lake Maelar. The landscape was quiet and peaceful, with meadows and trees, fields and forests—but no one would have paid any attention to it, had it not been the site of one of the oldest castles in Sweden: Castle Gripsholm.”

And there they stay, eating, drinking, having sex, at times entertaining visitors who are there to cavort and disrupt, make things more interesting for their hosts. The princess is a fascinating character, wise and witty, a possible feminist sensualist, and it is clear the narrator knows it, whatever he may want to make of their relationship and much-protested lack of commitment.

“We knew only this: one of the profoundest German sayings is about two people ‘who can’t stand the smell of each other.’ We could, and that, if it lasts, already counts for a lot. She was everything to me: mistress, comic opera, mother, and friend. What I was to her I could never discover.”

Fast forward a bit and while they have been having their fun, a woman is cooking up evil in a nearby children’s home, drunk on the power she has over the little people in her care. When Tucholsky and the princess cross paths with a girl who has managed to escape, they will step outside themselves and embark on a quest to save the urchin and return her to her mother.

That is pretty much the plot, and the novel will sometimes read like a cross between a relationship manifesto and a travel essay, the repartee between the lovers highlighting what they love most about the other: the ability to share their view of everything in the world in an interesting way. This is how we learn that people are very deliberate in Sweden. That whisky, if it’s good, tastes like smoke. That “salt-stains can be removed by pouring red wine over them,” and that the German language “can be a mixture of everything: rough and tender, funny and sincere, clear, sober and, above all, it can be beautifully drunk.”

And so, you could read this novel as the “short summer romance” his publisher asked Tucholsky, the narrator, to write, or you could, instead, see author Tucholsky’s political passions playing out in the subtext and read it as a fable.

You would be in good company if you chose the latter and read Castle Gripsholm as “a parable for the evil threatening Germany in 1935,” as did Publisher’s Weekly in 1988, and Variety, in reviewing Summer of ’32, the movie adaption of Tucholsky’s novel, in 2000.

You might see Ada, the little girl needing saving, as an understudy for the people of the Weimar Republic, at work, trying to survive, to be free to live their lives. And you might read the author’s holiday in the countryside as the calm before the storm, with Lydia as his Germany, and Tucholsky as the conscientious objector that he was in real life:

“Sometimes, in the grip of a nightmare, I would start up and cling to the Princess . . . ridiculous!

“Do you want to save me? she would ask laughingly. It had happened two or three times—often I wouldn’t even know.

“‘Last night you saved me again . . .’ she would say the next morning. But it was the holidays now; I certainly wouldn’t be saving her tonight. I put my hand on her as she slept. She sighed gently and shifted in bed. It’s nice to be together. The skin doesn’t get cold. Everything feels quiet and good. Your heart beats calmly. Good night, Princess.”

This ends a chapter and the next lines introduce tearstained Ada and her nightmare at the hands of her sadistic headmistress who is, perhaps, a literal stand-in for the Nazis.

In the end, though his writings remain quite influential in Germany, Tucholsky was just a writer and could only write. He could not save Germany from itself or himself from the darkness of what he so closely foreshadowed. Castle Gripsholm was his last important work, and he left Germany when the National Socialists came into power. He moved to Sweden, where he died by his own hand and was buried not too far from Castle Gripsholm, the site of his last bliss before everything changed, the place where he set his most famous, most autobiographical, the happiest, of all his stories.