Case Red: The Collapse of France 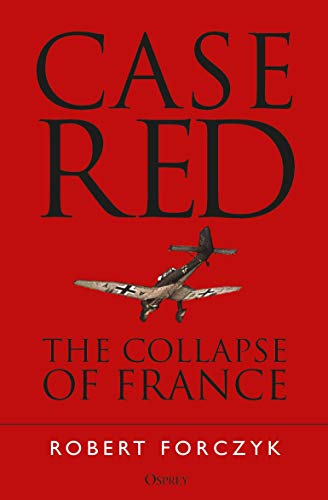 “Case Red has detail that  . . . would make an educational and entertaining read for the World War II enthusiast.”

"The historiography of the Second World War has not been kind to France," the French contribution "is still regarded as almost negligible." France did fall in June 1940 after only six weeks of fighting, but its alleged military weakness and "internal political divisions" "was hardly apparent to contemporary senior leadership."

A "wide variety of social, political, economic and military factors that the author of Case Red asserts contributed to the rapid French military defeat" appears in numerous books. Robert Forczyk adds to the scholarship on the Fall of France with more on the largely ignored "Case Red (Fall Rot)" or the "final phrase of the German offensive" in June 1940, and other history largely overlooked.

Case Red does not change history, but it is epic with North African soldiers, Czech aviators, Polish soldiers, the French navy, German atrocities, the Italian front, and much more added as lost history now recovered. Huge armies so close enough to equal that either side could win waged modern mobile warfare on air, land, and sea in what became the German military's greatest victory.

Forczyk explores how the "traditional explanations for the military defeat" "fail to explain a number of things." Forczyk concludes that "the operational outcomes in the French campaign were shaped by the insubordination of three general officers: Guderian [of Germany], Weygand [of France], and Brooke [of Great Britain].

The author carefully challenges misunderstandings and myths about British, French, and German rearmament, as well as the conduct of the campaign. He clearly explores the complexities of the French army's failure.

Many things mattered. Why, for example, did France fail to better use proven anti-tank tactics?

The author also includes the Maginot Line, demobilization after World War I, diplomatic efforts, and the Great Depression etc. "Both France and Great Britain were considerably distracted by costly colonial conflicts and myriad other situations requiring military forces or security guarantees."

Case Red has detail that might bore a general audience but would make an educational and entertaining read for the World War II enthusiast. The prose is fast and straightforward, the book well illustrated and with useful maps.