In Case of Emergency: A Novel 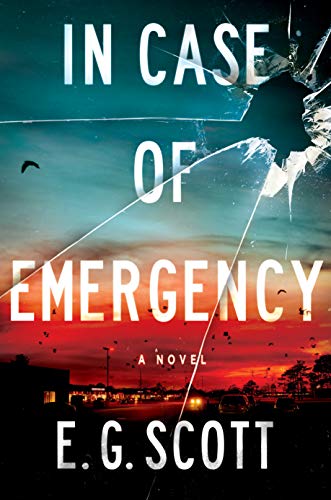 “If you can get around . . . the premise—an emergency note in an unknown dead woman’s pocket points to the protagonist—and it appeals to you, plan on spending extra time getting through In Case of Emergency.”

E. G. Scott, (contributing authors Elizabeth Keenan and Greg Wands) presents an interesting premise in their new book, In Case of Emergency. Charlotte Knopfler, a once up-and-coming neurosurgeon but now an acupuncturist, is struggling with the death of a patient that caused her downfall. She relies upon her best friend and business partner, Rachel, to keep her on a steady course.

Added to her insecurities is her floundering relationship with a mysterious man, Peter. Their relationship is digital, and at times he is supportive and loving, at other times cold and remote. Peter has been on the remote side for several weeks—totally out of contact with her, and she worries.

As she wrestles with his absence, she is approached by two detectives, Wolcott and Silvestri, who inform her that an unidentified body has turned up and the only information they have found is a note with Charlotte’s name as the contact in case of emergency. She is brought to the morgue to identify the body, and to everyone’s surprise, the dead woman is totally unfamiliar to Charlotte.

The police don’t entirely buy this story, and they begin their search into Charlotte’s background while they attempt to identify Jane Doe.

A side note here—Scott’s writing style can best be described as a bell curve, i.e. the first third starts slow, the second third picks up the pace midway through, then the last third slows down to a crawl. Much of the slow pacing can be accounted for through the use of various first-person chapters that make it difficult to remember who the narrator is. Add to this several chapters that are text conversations where no one is narrating, and one doesn’t even know who the characters are or what the discussion is about because there is zero-person narrator. The story is very choppy through this first third.

When the detectives discover the identity of the woman, Brooke Harmon, they continue to dig further and learn that Brooke was the sister of the patient (Michelle Harmon) who died on Charlotte’s operating table. Clues start to rise to the top and more than one finger begins to point to Charlotte as the murderer. Charlotte is caught in a whirlwind of misinformation that she is unable to get her hands around.

And it doesn’t help that Peter is still MIA; Rachel is trying to convince Charlotte that she should give up trying to further her relationship with a man so utterly untouchable, and as a side story, Charlotte’s mother, a throw-back to 1960s hippydom, is of no help to her at all and drives Charlotte’s mental state into further disarray.

When she learns that Brooke is Jane Doe, she further upsets herself when she convinces herself to learn more about Brooke and try to come to grips with Brooke’s hatred for her. Throw Brooke’s parents into the fray and there is a tumultuous tsunami heading right for Charlotte.

Charlotte allows her infatuation for Peter to direct her against Rachel’s warnings and a large disagreement ensues. It is after this quarrel that Charlotte returns to her friend’s house to apologize only to find Rachel dead. The police are on her trail, and now she has to fight to explain her innocence. The police are still not buying it, and Charlotte is arrested for both murders.

As we get into the second third of the story, the pace picks up, although the changing first-person narratives continue to confuse. New characters arrive on the scene: Lucy, a new client brings some peace to Charlotte with her calming attitude; Henry Thornton, the head neurosurgeon during Michelle’s death, only makes a brief appearance in the book, and yet he plays a major role in Charlotte’s lot in life; and Jack Doyle, aka Dr. John Lyons, who has been infatuated with Charlotte for reasons that are not entirely clear wanders throughout the story.

The story moves into the last third and promptly drops down to a snail’s pace. When the real culprit is discovered, the authors attempt to construct a fast-paced scene of retribution but drag it out through too many pages to the point where it becomes somewhat boring.

The end of the story feels as though it was not well planned. The protagonist, Charlotte, does not solve the crime; the detectives arrive late to the scene, and the end of the story drags out. As mentioned at the beginning, the premise is a good one, however the numerous narrators, and side stories, and confusing text messages drive the story around in circles.

If you can get around those issues, and the premise—an emergency note in an unknown dead woman’s pocket points to the protagonist—and it appeals to you, plan on spending extra time getting through In Case of Emergency.