Ordinarily Well: The Case for Antidepressants 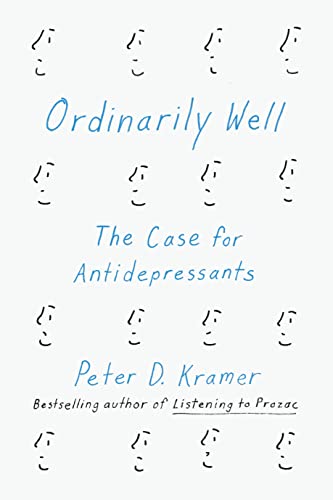 At times, a scholarly well-written book will disappoint because it is not what the reader expects. Ordinarily Well by Dr. Peter Kramer falls into this category.

Fortunately this book is not one of the many pop psychology/psychiatry books about depression and antidepressant medication; there are far too many of these already. This is a scholarly text that should be classed as a textbook for professionals rather than a book for the general public. As a textbook it fills a literature gap, providing information that has not been gathered and presented in one volume.

Because of Kramer’s earlier publications as well as media coverage of his writings on antidepressants, he has been the target of media-related slings determined to undermine the principles and beliefs that he has espoused. This book reflects a scholarly attempt to refute in print these doubters, primarily through detailed analysis of studies that support antidepressant efficacy. To the extent that this is the goal of the author, the book is done well. There are voluminous references of studies that are viewed dispassionately and appropriately compared.

Unlike Listening to Prozac, the author's most widely read book, this book has a very narrow window of those who would enjoy and benefit from its scholarship. Primarily these are psychiatric residents, medical students, and future researchers.

The book does a creditable job of evaluating the methodology of research studies in psychiatry and the shortcomings of a number of studies that are discussed in detail. Terms such as selection bias, technical bias, number needed to treat, rescue treatments, categorical analysis, comparator arms, trial additivity, and others are crucial to understanding the validity of many antidepressant trials. They are however, terms that are foreign to the typical lay reader or persons not familiar with research methodology. Toward the goal of documenting scholarly analysis of research projects, the author at times overwhelms the reader with complexity and terminology.

It is possible that a reader might choose this book thinking that it will help decide if he/she should be treated with antidepressants. That reader will be disappointed. The jargon and the intense focus on research studies will leave the lay reader with as many questions as answers.

The author’s bottom line answer to the first and primary "anti-depressant controversy" is stated repeatedly—namely that antidepressants work. The author, by and large, refutes skeptics who have based their opinions on studies that tend to be faulty in design or poorly interpreted.

A second controversy is whether the positive effect measured by some antidepressant studies is ultimately a "placebo effect" which is not due to the pharmacological effects of the medications, but to the patient’s wish and expectation to feel better. After a lengthy discussion, the author concludes that antidepressants have true pharmacological value. Placebo effect may be an additional but not principal mechanism.

Later chapters also describe the difficulties inherent in performing further studies of antidepressant efficacy in the 21st century. Very few patients have depression as a sole diagnosis; therefore their mental health condition is mixed and at times confusing. Many patients currently recruited for clinical trials often come from the poor and underserved who benefit from socialization and other procedures inherent in the study methodology, thus complicating study results. Lastly there are relatively few patients who are "medication naïve." They often have failed multiple antidepressant trials prior to entering a study and therefore reflect a cohort of patients who are more treatment resistant. The end result of these complications is that the ability to definitively prove that active antidepressant medication is significantly better than placebo becomes very difficult.

Ultimately, the author suggests that the clinical experience of practicing psychiatrists and psychopharmacologists serve as a counterbalance to the marginal responses seen in recent clinical trials. That is to say that most practitioners know from their clinical experience that this class of medicines is effective for a wide variety of depressive conditions, well beyond any placebo effect.

Virtually all practitioners who regularly treat depressed patients do not see any continued "controversy" in the use of antidepressants for a wide variety of depressive subtypes. The lay reader would do better to work with such an experienced clinician and accept his/her advice about the advisability of antidepressants, rather than making a decision based on this text.

Several other current real-life controversies are covered only briefly:

The best part of the text is the recounting of the author's treatment of a variety of individuals and their outcomes. Dr. Kramer bares his professional soul as he describes an almost painful evolution from minimal antidepressant use to more common prescription, attempting to balance the benefits of medication with psychotherapy.

A reader who understands the intent and scholarly nature of this book, will find it well done. This is a book to be studied but is not bedtime or beach reading. It will probably be best distributed through medical center bookstores rather than airport book kiosks.