Cardiff, by the Sea: Four Novellas of Suspense 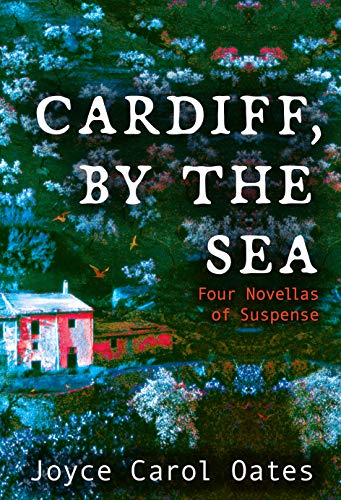 “Using her remarkable, literary voice to investigate the psychological experiences of victims, Oates requires that we willingly suspend our disbelief and reject realism as a means to identify societal truths.”

Joyce Carol Oates returns to the literary scene with a collection of four novellas, including the titular story Cardiff, by the Sea.

Each story from this prolific and critically acclaimed author has similar thematic elements, primarily the damage men inflict on women.

In the first novella, Cardiff, by the Sea, Oates creates a dreamlike experience for the reader.

A young adopted woman answers her phone one day to discover her unknown biological grandmother has died and left her a family home in Maine.

Knowing nothing about her biological family, Clare sets out to investigate two great-aunts and an uncle—the only relatives she has left—and perhaps answer the question of why she was given away as a three-year-old, not as an infant as one might expect.

She arrives in Cardiff, Maine, to find herself in a nightmare.

The aunts are chaotic and cruel to each other. Trading insults, they dominate the scene. Clare, unused to anyone fussing over her, isn’t sure she’s made the right choice to stay with these strangers. “Both great-aunts are staring at her avidly. Hungrily.”

Things go from bad to worse when her uncle appears the next morning at the breakfast table. “He is surly-mouthed, ungenerous.” His presence does nothing to improve the situation.

“Clare has the idea that the elderly great-aunts are deliberately testing their nephew’s patience with their banter, under the guise of being friendly and protective.”

Clare’s experiences become more and more surreal and dangerous. Is she being poisoned? Is she devolving psychologically? Or is this a classic horror story that Clare cannot survive?

And what really happened the night her parents and siblings died? The resolution may leave some readers frustrated, but others will embrace the ambiguity.

The second novella, Miao Dao, opens with 12-year-old Mia facing her mother’s depression after her father moves out of their home. “Her father (who’d been away for twelve days, traveling on business, she’d been told) was moving permanently out of the house, moving out of the family. But why?”

Desperate for companionship, Mia turns to the abandoned cats that live in an undeveloped plot of land nearby. “Mia could not remember when she’d first learned of the ‘wild kitties’ in the vacant lot beside their house.”

Unable to build connections with school friends and bullied by the boys, “[i]t had become Mia’s secret, stopping to visit the feral cats on her way home from school.”

Mia turns more and more to the cats for succor as her mother starts dating again, bringing the brutish Pharis Locke into her daughter’s life and home.

Mia adopts a kitten to fill the empty places left behind by an absent father and a self-absorbed mother.

But, as with all good horror stories, reality begins to shift. A murder. Rumors of a violent creature attacking unruly boys. Shadowed figures in alleyways.

Mia’s world becomes dark, such as the moment when she wakes and finds in “the air about the bed, a smell of wet earth, rotted leaves and grass, something dark and viscous, like blood.”

Entangled throughout it all is the behavior of the new stepfather toward his adolescent stepdaughter. Oates explores the ability of some men to hide their true natures for finite periods of time. Pharis Locke finally shows who he really is only after cementing his place in the family.

The ending is less ambiguous than that of Cardiff, but it still retains a sense of the dreamlike quality established in the opening novella.

Alyce is a student at university when she starts up a relationship with a young instructor. He uses his position to control her, and Alyce soon finds herself in an untenable position. “Though her body tensed against him, unmistakably. Stiffening in sheer physical panic, dread. Another man, a truer lover, would have relented, drawn away.”

Unable to break the affair off, but dreading its continuation, Alyce feels trapped by her gender, age, and circumstances.

“And then Roland B___ interceded in her life.” And an unlikely “friendship” with a visiting poet offers her an out.

But do Roland’s feelings for Alyce only create another prison?

Oates continues to investigate the physical side of male power over women, their bodies, their ability to reproduce, and their strength for inflicting violence.

The final novella, The Surviving Child, returns us to the more surreal, horror story style established with Cardiff, by the Sea.

Elisabeth marries a man whose previous wife killed herself and the couple’s young daughter. This in turn, makes Elisabeth the stepmother to the surviving child, Stefan.

He is a strange and reclusive boy, and Elisabeth does what she can to bridge the gap between her and her young stepson, a child she sees as deeply damaged. “Those wary, watchful eyes. How like a fledgling bird in its nest Stefan is, prepared to cringe at a gliding shadow—a parent bird, or a predator that will tear him to pieces?”

She feels compelled to protect him. “As sharp as a sliver of glass piercing her heart comes the thought—I will love him. I will save him. I am the one.”

As Elisabeth becomes entrenched in her new family, she discovers that her husband may not be the man she thought he was.

In this final novella, Oates returns us once more to the idea that a man can hide his true self for short periods of time when it suits his purpose, but not forever.

Oates weaves fantasy, horror, and the macabre throughout each of the stories, providing an investigation into the many ways that women are terrorized simply for their gender.

Using her remarkable, literary voice to investigate the psychological experiences of victims, Oates requires that we willingly suspend our disbelief and reject realism as a means to identify societal truths.