The Campaign of Fear 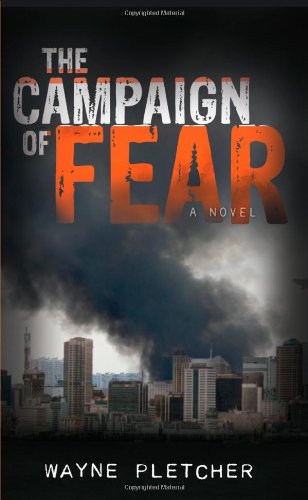 Imagine the lives that would be saved, the life-altering wounds prevented, if there existed a device that could find and detonate Improvised Explosive Devices well ahead of a military patrol or convoy, or stop a suicide bomber well before he reached his intended target. Dr. Wayne Pletcher envisions such a world-changing development.

Scientist and entrepreneur Dr. Bradford Tully leaves his position at a government-sponsored oil exploration firm and sets out on his own to develop his acoustic search technology. His concepts are in such high demand that he quickly receives millions in funding and contracts from two major advanced technology corporations. One, Advanced Technology Products, is a contractor for the government’s new DoAT, or Department of Advanced Technology. They recruit Tully to aid them in developing the most advanced explosive detection device ever conceived. Tully’s other investor, Technology Investment Corporation, has much more sinister intentions. TIC is actually a front for a group of Islamic Techno-Terrorists called Technolibertat. The terrorists are attempting to infiltrate U.S. defense contractors to gain knowledge of anti-terror technology.

DoAT soon discovers the terrorist plot and convinces Tully to continue working with TIC in an effort to bring down Technolibertat and reel in their Al-Qaeda handlers. Tully agrees at the risk of his own life and that of his colleague and lover, Zenica Lang. The Campaign of Fear follows Tully, Zen, and a cast of supporters, including programmers, engineers, and even a psychologist, as they race to complete their explosive detection device and catch the terrorists.

Dr. Pletcher’s concept is timely and inventive. Such a device would truly benefit troops in the field all over the world, particularly in Iraq and Afghanistan. Unfortunately, the story surrounding his ideas moves slowly at best. At more than five hundred and fifty pages of closely spaced text, The Campaign of Fear is a novel of epic size without an epic plot.

The are a few action scenes, including a pair of graphic sex scenes that seem out of place with the rest of the book, but Dr. Pletcher’s primary methods of moving the story are meetings and phone calls during which his characters discuss the action, rather than participate in it. Add to this long soliloquies that randomly switch between third-person narrative and first-person inner monologue, and you get a very long, cumbersome, and difficult to follow book.

Dr. Pletcher is at his best when discussing the science. This is no surprise given his impressive pedigree of professional writing and his experience in the world of advanced technology. His descriptions of chemical compounds, software programming, and the actual acoustic explosive detection device are so realistic that the reader may wonder if he isn’t actually building one of these things in his garage. And, in fact, I hope that he is.

While I cannot recommend The Campaign of Fear on the merits of its fiction, I do hope that the technology conceived within its pages may someday come to fruition.