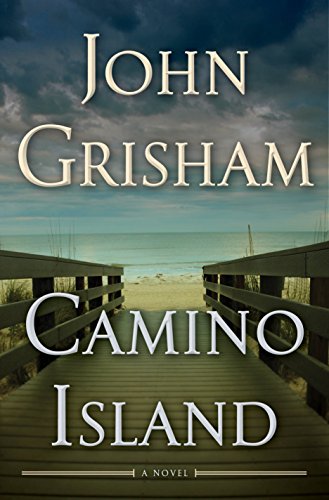 Camino Island is John Grisham’s much-anticipated 30th novel. It tells the story of the theft of priceless F. Scott Fitzgerald manuscripts from the Princeton University library by a gang of thieves. Although the loss is insured, the university and the FBI’s Rare Asset Recovery Unit nonetheless would very much like to retrieve them.

Mercer Mann is a young university instructor whose teaching contract has expired. With a novel and a short story collection to her credit, she’s battling a major case of writer’s block as she tries to figure out her next career move.

Enter the mysterious Elaine Shelby, who offers to clear her student loan debt and drop a large chunk of money in her bank account if she would assist Elaine’s company in tracking down the Fitzgerald manuscripts. Since it involves returning to Camino Island, where she spent her summers as a child with her grandmother, it becomes an offer too enticing to refuse.

Mercer’s target is Bruce Cable, the dashing, handsome owner of an independent bookstore specializing in rarities. Mercer’s mission is to establish herself in residence in her grandmother’s cottage, make an effort to rekindle her dormant manuscript in progress, insinuate herself into the substantial literary scene on the island, and get close to Bruce in case he should drop a careless word about hiding priceless manuscripts in the basement of his store.

After 30 novels, a Library of Congress Creative Achievement Award, and two Harper Lee Prizes for Legal Fiction, Grisham has surely won the right to follow his muse and write whatever book he feels like writing. This one gives him an opportunity to write about writers and publishers and agents and booksellers, real and imagined.

As a book about the book world, it comes off as a tepid parody of Fitzgerald and Hemingway’s Left Bank. The island’s literary scene is dominated by the salon of Myra Beckwith and Leigh Trane, Grisham’s bathetic version of Gertrude Stein and Alice B. Toklas. Throw in a drunk whose publisher keeps rejecting his manuscripts, a best-selling author of paranormal romances, an obligatory smear of self-published authors and, of course, Bruce Cable the bookseller as the handsome spider in the middle of the web, and readers who love aimless plotlines from their favorite bestseller are all set.

While the theft of the manuscripts is a crime, and the actions taken by the thief who unloaded them for a song and now wants them back at all costs are also criminal in nature, Camino Island barely qualifies as a crime thriller. In fact, since the primary focus of the plot is on Mercer’s attempt to get close to Bruce, intimately close if possible, the interior chapters of the novel are nothing more or less than romance fiction.

Our protagonist is shy, inexperienced, and uncertain of herself, but inexorably drawn to the aging golden boy with the open marriage and mysterious involvement in rare books. Readers who are not partial to romance novels will find Grisham’s decision to parody this genre—whether intentionally or unintentionally—to be tedious, irritating, and not what they want to see from him.

Characters are the engine that drive a novel, and it can be said that many of Grisham’s past characters have been enormously strong. The Runaway Jury’s Nicholas Easter, Marlee, and Rankin Fitch are perhaps the most powerful trio of characters in legal fiction. When two Supreme Court justices are assassinated in The Pelican Brief, law student Darby Shaw pulls the narrative together around herself. The Litigators, although covering ground previously explored in The Associate and other novels, is a success because David Zinc, Wally Figg, and Oscar Finley bring the story to life as vibrant, amusing, and sincere characters.

Mercer Mann, however, is an insipid and vaguely drawn protagonist. Her motives in accepting the assignment to penetrate Bruce Cable’s world would seem to boil down to money, sexual curiosity, and perhaps even boredom. Frankly, she doesn’t deserve to share the same bookshelf with Darby Shaw and Reggie Love.

Camino Island will find its audience, no doubt, but not necessarily the same audience that has cherished John Grisham’s legal thrillers in the past. Nor will it stand the test of time. I’ve read The Runaway Jury about a dozen times so far, The Pelican Brief about six times, and The Client, The Litigators, The Rainmaker, and The Street Lawyer four or five times each. Camino Island, however, I’m very sorry to say, I won’t read again.