The Call of the Wrens 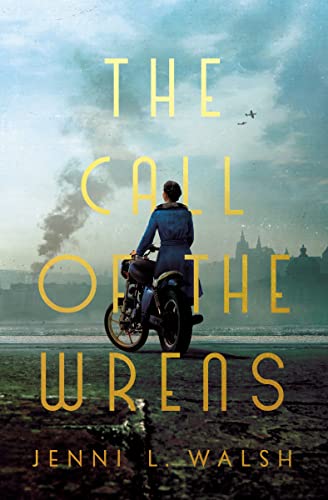 “A tale filled with strong emotion, hope, and determination, this highly thought-provoking story and entertaining.”

This novel encompasses two intense and exciting novels in one, though they tie together nicely. We first meet Marion Hoxton who in July 1940 lives in West Devon, England—if you want to call it living. She resides somewhat reclusively in a tiny cottage where she reminisces about the past. When her friend Sara comes knocking at her door, she tries to ignore her presence, but Sara is wise and knows Marion is home. She will not be deterred.

The two women had been close when they served as "Wrens" during World War I. Wrens is the term used for the female sector of the British Women's Royal Navy Service.

Previously Marion led a lonely life, abandoned as a baby and tossed around from one orphanage to another. The only company she had was reading her beloved books. She did not socialize with the others and has become mute. Then at age 14, she is moved to St. Anne's Home for Boys and Girls, which is her residence until she is 18.

The other youngsters tease her for not talking, but she takes it in stride and spends most of her time sitting in a corner reading or working as a typist. The only one who shows interest in her is a 13-year-old boy named Eddie Smith. Though her complete opposite—comical and magnetic—Eddie sees something in Marion and draws closer to her. He watches as she sits in solitude until he approaches her with questions—questions where he only receives a nod or a shake as answers. The two become inseparable and Marion begins to speak, but only to him.

Marion teaches Eddie to read so he, too, can discover the mysteries books provide. Sometimes they sneak off at night and roam the streets, though they know it's dangerous. The war begins shortly after Marion arrives at the home, and sirens blast, but nothing deters the two from venturing out. One time they find an abandoned motorcycle they take back to the orphanage to hide. They decide to call it "Alley Cat" . . . shortened to Alli because they found it in an alley. They conceal it well and drive it on the nights they go out unbeknownst to anyone.

Then comes Marion's 18th birthday and the time for her to leave St. Anne's. But where will she go? She has no one and no place.

"But the time had come, and it was only Marion being spit out.

"Sister Florence's gaze jumped to and from the pamphlet she held. 'You've been schooled well, and it should be quite within your skill set to find work, domestic or otherwise until you marry. As it is, I'm told the war is requiring an endless number of men. There's a shortage, so much so that women are being asked to volunteer.' Sister Florence placed what she'd been holding on the desk. 'I believe this may be an ideal opportunity for you after you leave here.'

"Marion read the pamphlet's bold-typed words: JOIN THE WRENS AND FREE A MAN FOR THE FLEET.

"Women's Royal Naval Service? she thought, reading the thinner line at the very top. In the foreground a woman stands proudly in a cap, jacket, tie, and skirt, saluting. A battleship floats in the background.

"'They call themselves the Wrens,' Sister Florence offered. 'I wrote the director, and she told me it's a new women's branch of the Royal Navy. They enlist women to fulfill the non-fighting tasks. Typist. Cooks. Stewards, Typists,' she repeated. 'Like you."

And with this, Marion's fate is sealed. She does not want to leave the home, and she especially does not want to be apart from Eddie, but she has no choice. Training is tough, but she has a position and makes new friends who are like sisters. Assigned as a typist at first, she feels smothered sitting behind a desk, and soon she is thrilled when given the job as a motorcycle dispatch rider. She works with her roommate and friend Sara. They train carrier pigeons while Marion transports them to the front lines to pass information back and forth.

As the war escalates and Marion is faced with many ups and downs—happiness and surprises as well as pain and heartaches.

In alternating chapters, Evelyn Fairchild comes into the picture. It is 1936 and at age 21, she is the only child of wealthy parents and living in Weybridge. Born with the disability of a club foot, she endures many operations over the years, yet she is still being smothered by her mother who does not want to let her out of her sight.

When Evelyn takes driving lessons, she finds it stimulating, giving her a sense of independence. With this newfound freedom, Evelyn discovers The Brooklands, a motor-racing track, and she is captivated by it. Against her mother's wishes, she becomes an accomplished driver, and going by the moniker Dare-D-Evelyn, she wins several times.

Unfortunately, Evelyn soon learns the track will be turned into a plant to produce aircraft due to the conflict with Germany and the possible start of another war. More young men are being conscripted into fighting, and more planes need to be built. Evelyn is upset about no longer being able to race, but she is more worried about her childhood friend, Percy Harrington. Though he is a physician, she wonders if he will be exempt from going into battle. Percy is the only pal she's ever had what with being so sheltered. He is also the man her parents have chosen for her to wed.

Evelyn does not want to marry. She wants to race cars, be independent and her own person, and to especially get out of the suffocating clutches of her mother. Soon she realizes a way to escape is to join the Wrens. This causes dissension between her mother and her, but she needs to make the break. Stationed in London her training is vigorous training, and she prays she can endure it with her handicap.

Evelyn’s commanding officer happens to be none other than Marion. She is intimidated by Marion for she feels she is constantly watching her, but what is worse, she allocates the easiest assignments to Evelyn. Does she think because of her disability she is not able to do her job? Even though the training is tough, Evelyn passes proving she can handle the duties. But there is something puzzling about Wren Marion. Why does she seem to pay more attention to Evelyn?

Though the two different women presented in diverse time periods are somewhat conflicting, as the story evolves, the objective for this unusual approach is described and fully explained. A tale filled with strong emotion, hope, and determination, this highly thought-provoking story is entertaining. It is clearly evident Ms. Walsh has spent indeterminable hours researching and putting together a well-written and memorable story about past events to make them truly authentic as well as informative.