This Is a Call: The Life and Times of Dave Grohl 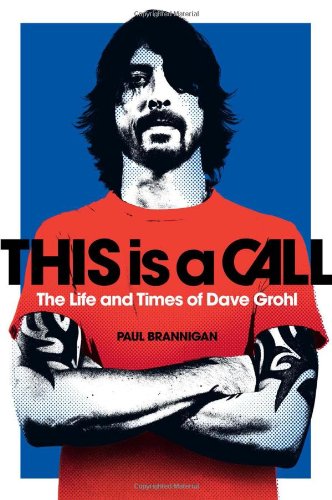 “In following this kid from the back blocks, who not only graces the covers of Modern Drummer and of Guitar World in one lifetime, who has made and held a fortune, owns his own record company, hangs out with presidents and movie stars, and gigs with musical luminaries regularly, Paul Brannigan loops a fascinating narrative around a compelling and likeable character.”

It’s fair to say you know you’re about to embark on a special kind of journey when a bio on a contemporary American rock star launches right into aspects of mid-20th century European history.

Paul Brannigan’s biography of musician Dave Grohl and his era, reaches ambitiously out of bounds for the conventional pop bio, cradling its subject in layers of context, political and social history, and a Ben Hur cast of big names and lesser lights shuffling across the pages in an unending stream of influential supporting roles along the subject’s unlikely path to fame and fortune.

Pretentious and overly earnest it may have been, but author Brannigan’s excellent segues, characterizations, and lyrical zip ensure This Is a Call occasionally tips but never topples under its own weight. The result is an educational and highly entertaining read.

Dave Grohl emerged from the west coast scene in the mid-1980s and traced a path more or less directly to mega-stardom and undreamed of wealth as the drummer for the iconic punk/grunge band Nirvana.

As the author of one of the most recognizable rhythm section count-ins of our era—the drum intro to “Smells Like Teen Spirit,” the video of which is approaching 60 million YouTube hits—Grohl’s story might justifiably center on his best known mega-band.

But Nirvana’s shambolic lurch across the stage of popular music only covers a few middle chapters—the journey from Nirvana’s take-off to the suppurating, drug-addled decline of its enigmatic singer/songwriter Kurt Cobain, which covers just 15 pages—and it is clear that the Nirvana Supanova was but a brief if powerful light on the wide horizon of Dave Grohl.

The rise and fall of Nirvana is, however, where readers may really feel This Is a Call gets moving. The early career of Grohl is mired in grunge and punk culture, with bands like Black Flag, Mudhoney, Fugazi, Bad Brains, and Grohl’s own Scream thundering out a soundtrack. For Grohl as for many of his peers, it was a time punctuated with bouts of homelessness and poverty, of lost nocturnal lifestyles infused with the whiff of weed and beer breath.

While this trawl through back alleys and squats may be of interest to those who lived it or for dedicated music historians, the detail and depth seem overdone for a wider audience. Less an insight to Grohl’s backstory, it often careens away from Grohl for long periods, and tends to read like nothing more than a misjudged effort to offer a linear, eponymously grungy history for an anarchic and spontaneous musical era.

Grohl is nothing if not a survivor and a canny player of people and situations, and this sense of him is subtly captured by Mr. Brannigan’s deft analysis, which is on a surer footing as the book moves into the Nirvana phase and beyond into Foo Fighters, QOTSA, and Them Crooked Vultures territory.

For Grohl to have survived being in the presence of a seemingly demented misogynist like the late Cobain and his muse Courtney Love (perhaps the Yoko of her generation), with reputation and social network more or less intact is a testimony to his innate strength of character and fortitude.

As Mr. Brannigan discovers, his subject freely admits that there was a plan all along: “was I comfortable selling 10 million records and buying a house and finally being able to support myself playing music? Absolutely . . . I have never, ever wished for anything less.”

So, turns out Dave Grohl, the “nicest guy in rock music” and someone who has earned his punk chops is a materialist and a careerist. Nothing wrong with that necessarily, of course, but it does give an insight to the hard head on the shoulders of the anti-establishment punk who heard in music a pulse that “made me want to break shit,” who became the iconic, mainstream millionaire rock king we have today.

But Grohl never seems to be enamored of wealth and fame for its own sake. It’s all really just a means to the end of playing music, on his terms, with pretty much whomever he wants, forevermore. Driven by a simple desire to go on creating without the daily press of financial limitation or the threat of obscurity, Grohl is not unlike any creative mind, an artistic everyman.

In following this kid from the back blocks, who not only graces the covers of Modern Drummer and of Guitar World in one lifetime, who has made and held a fortune, owns his own record company, hangs out with presidents and movie stars, and gigs with musical luminaries regularly, Paul Brannigan loops a fascinating narrative around a compelling and likeable character.