In the Café of Lost Youth 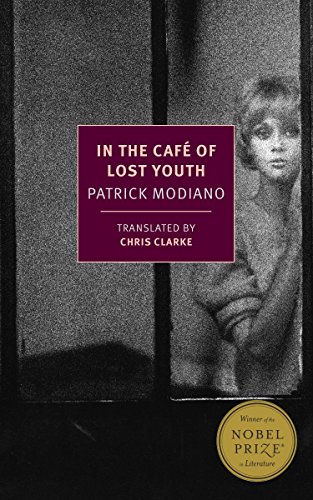 “There were two entrances to the café, but she always opted for the narrower one hidden in the shadows. She always chose the same table at the back of the little room. At first she didn't speak to anyone, then she got to know the regulars of the Condé, most of whom were about our age, I'd say between nineteen and twenty-five years old. She sometimes sat at their tables, but most of the time she was faithful to her spot, way at the back.” The Café of Lost Youth, by Nobel Laureate Patrick Modiano, takes place in the seedy twilight world of 1950s Paris. The “she” in the above excerpt is Louki. Not her given name, but a nickname she acquires from her hanging around the Condé. It is a world populated by bohemians and criminals.

Divided into four parts, Mr. Modiano's compact novel revolves around Louki and several men trying to understand her. Like Orson Welles' Citizen Kane, it is about how ultimately this young woman forever remains an unknown. Like Thomas Pynchon's Crying of Lot 49, it is a mystery that only gets more mysterious as it proceeds. Another parallel is David Lynch's Lost Highway, his Moebius Strip noir taking place in suburban Los Angeles and the empty California desert. It is a film that uses the tropes of film noir to plumb the depths of individual alienation and psychological horror.

Despite information accumulating over the four chapters, Louki preserves an enigmatic haze around her. The first chapter is narrated by a young student. He sees Louki as a distant love object, an icon of infatuation.

Caisley narrates the second chapter, the tone switching from adolescent lust to a world-weary noir. Hired by her husband, Caisley investigates Louki's disappearance.

While the third chapter is narrated by Louki herself, the chapter doesn't present itself as a moment of revelation or solution. Only more information and more questions. “My name wasn't Louki then, it was Jacqueline.” She gets married at a young age and lives in a state of urban bourgeois ennui.

The last chapter is narrated by Roland, a fellow student of Guy de Vere, a teacher of esoteric philosophy. (The plot details are kept minimal because the pleasure comes from the slow accretion of information revealed and blurred by the four different perspectives.)

Unlike other titles in New York Review Books Classics, The Café of Lost Youth lacks an explanatory Introduction. They made the correct editorial choice, since any introduction would ruin the fragile magic of Modiano's short novel. Who is Louki? What motivates her actions? What is the final assessment of her character? All these are left unresolved and unexplained. Not all mysteries were meant to be solved.

Modiano uses noir and the bohemian setting to explore the moral murk of a post-Vichy France. After the Occupation, France endured a spat of vigilante violence, a collective absolution for collaborating with the Nazis. The second aspect of post-Vichy France was a collective fabrication of past lives. Many created their own mythologies, turning themselves into heroic Resistance fighters. The French Fourth Republic, a weak system recovering from military defeat and political collaboration, stumbled along for a decade until the Algerian crisis of 1958 sealed its demise and ushered in the return of General DeGaulle.

The genius of Modiano's work lies in how it straddles the very real moral chaos of post-Vichy France and his creation of an idiosyncratic milieu. Patrick Modiano goes beyond the checklist accuracies of historical fiction, fashioning a lush fever dream filled with glamor, mystery, and despair.