The Butterfly Sister: A Novel 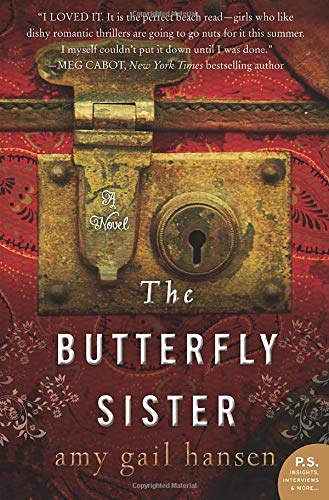 “One hopes for more offerings from Amy Gail Hansen . . .”

In The Butterfly Sister, Amy Gail Hansen creates a multilayered mystery that hooks the reader from the very beginning.

Ruby Rousseau, brokenhearted after an affair gone bad, the death of her father, and fearing her own madness chooses to leave college before graduation.

Ruby is convinced that she’s simply off her rocker like several women authors. Featured are references to Virginia Woolf, Sylvia Plath, and Charlotte Perkins Gilman—all of whom met their demise by their own hand.

Resisting the temptation to obsess, Ruby places all such books onto a donation pile, yet nothing alleviates her angst.

“But it was all in vain—the books, the antidepressants, the therapy sessions with Gwen. Even time’s wound-healing properties proved ineffective. Ten months later, my past was never more than one thought, one breath, one heartbeat away.”

Ms. Hansen sets the stage for what is ahead and draws us in with a seasoned writer’s touch for detail. We can visualize Ruby and her concerned, loving mother: “Our hair was not red, but auburn—a color reminiscent of autumn, football games, and hayrides.”

Then two things cause Ruby to rise out of her safe, but troubled status quo: a suitcase belonging to a friend at school is delivered to her mother’s home, and she learns that this same friend is missing. How did the suitcase get there? Compelled to examine its contents, she finds a copy of Virginia Woolf’s A Room of One’s Own with marginal notes and certain passages highlighted. They hold special meaning to Ruby and apparently to her friend as well.

Despite her own problems, Ruby is compelled to return to the school for answers to her friend’s disappearance. In her quest, she is forced to confront her own past and the circumstances that tore her away from Tarble, a traditional women’s college in the Midwest.

In a well-placed flashback, we learn of Ruby’s affair with an Adonis-like professor:

“Mark Suter was that disarming, paradoxical blend of rugged and refined. A cowboy in a blazer. A bad boy with a PhD.”

Immediately, the reader’s mental warning lights flash, as he draws Ruby in:
“Your thesis,” he rubbed his hands together fanatically as if preparing to throw down a triple word score in Scrabble.”

Ruby crafted her thesis around Woolf and planned to explore why so many women writers succumb to depression and ultimately suicide. We also learn what contributed to Ruby’s own feelings of madness. The deadly combination of a broken heart and a poor outcome academically forces Ruby’s decision to leave, forsaking her future and returning to the comfort of her mother’s home.

Momentum builds as Ruby’s personal puzzle assembles itself. Layers of mystery, madness, and betrayal converge. She finds solidarity with other students and a supportive teacher who come forward. (Yes, yes! We’re getting somewhere. )

But then the plot begins to unravel into implausibility. We long for something else in this segment—a “something” more consistent with the strong, beautifully crafted beginning of this novel. Actually, a less ambitious climax might have made the story even more powerful. Fortunately, the conclusion tends to cushion possible disappointment.

And yet the richness of detail, the layers of mystery, the lure of Ruby’s quest for sanity and closure, and the fascinating interweaving of the musings and history of Virginia Woolf, Sylvia Plath, and Charlotte Perkins Gilman will keep you reading.

One hopes for more offerings from Amy Gail Hansen—with her tendency toward melodrama corralled but her considerable talent unleashed for us to enjoy.