The Butcher's Trail: How the Search for Balkan War Criminals Became the World's Most Successful Manhunt 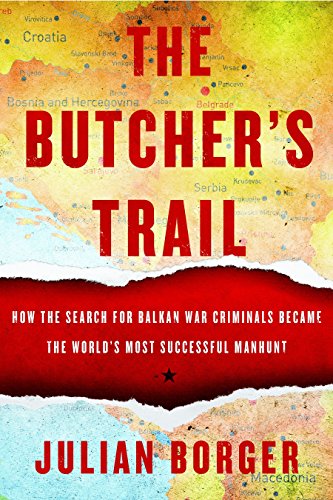 Diplomatic editor for The Guardian Julian Borger returns to the Balkans in this chronicle of the pursuit and capture of war criminals by the International Criminal Tribunal in The Hague. Having reported on Kosovo in 1999, Mr. Borger also covered the Bosnian War for BBC and The Guardian and was part of the team that won the 2014 Pulitzer Prize for public service journalism for the coverage of the Edward Snowden files on mass surveillance. There is no better author for this book.

Regardless of whether the reader is familiar with the Bosnian War; the ethnic cleansings of Bosniaks (Bosnian Muslims); the racism, propaganda, and fear perpetrated by Slobodan Milosevic, former president of Serbia; or the vile henchmen that carried out his orders such as Radovan Karadizic or Ratko Mladic, the reader will quickly become entrenched in the gut wrenching horror perpetrated upon thousands of innocent people in an attempt of Milosevic, and his followers to create an ethnically pure Serbia.

Not since World War II had such atrocities been visited upon European soil: mass killings and unmarked mass graves, concentration camps, round-ups of those considered undesirable. Eugenics and marked racism underlined the procession and destruction of several states of the former Yugoslavia.

Reported brilliantly, with direct quotes from letters, tapes, and interviews, with historical context and supporting evidence, Borger writes in a clear and enticing voice, pulling readers through the killing fields, through the streets and houses on surveillance by special teams, to remind readers and fans of nonfiction what happened in the 1990s.

The International Criminal Tribunal for the former Yugoslavia (ICTY) in The Hague had a shoestring budget and a succession of false starts with countries uncertain of their support, unwilling to risk money or manpower, and persistent political bickering and obfuscation that it is a testament to the Chief Prosecutors that the tribunal pulled itself forward at all. Louise Arbour (1996–1999) and Carla Del Ponte (1999–2007) did the most for the tribunal, with sealed indictments, carefully crafted legal procedures, the building of an internal intelligence agency and analytical team, and persistent diplomatic leaning on ambassadors, plus the tenacity and refusal to give up or in to threats, assassination attempts, or blackmail, that ICTY moved forward.

Readers will be on surveillance and snatch teams with the French, German, and Dutch, as well as Americans, as they read about the high stakes game to catch war criminals indicted for crimes against humanity. Each important and high ranking official gone after in the political divisions of the country assigned to different teams is brought to life with fine detail. At the back of the book is a chronology of arrests and transfers to the ICTY, abbreviations, notes, and a selected bibliography. Interestingly, and disappointingly, there is no index.

This fascinating tale is difficult to put down and reads like the best written of true crime. The Butcher's Trail is a stark and well-written reminder to readers that eugenics still has proponents, dictators and monsters still exist, and it is necessary to look up from one’s navel once in a while to recognize what is occurring in the rest of the world and to decide if the foreign policies put forward by presidential hopefuls fall in line with the ideals one aspires to—hopefully those of world peace.