Building Your Play: Theory and Practice for the Beginning Playwright 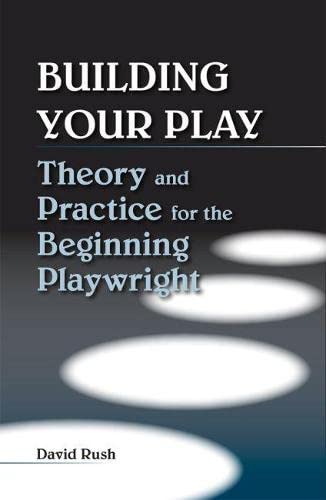 Author Rush, a college playwrighting teacher and the author of several produced plays, has created a masterful textbook for playwrights. He gives the basics of the craft in clear, simple language. He is teacherly in his tone, but he never condescends. Building Your Play provides step-by-step instructions in the readable and useful way we all wish the manuals for installing new software or putting together new lawnmowers would do.

Rush focuses on conventionally structured stage plays. The art of writing plays for the theater, he explains, is not at all the same as that used in writing movie scripts or novels. As he points out, many neophyte playwrights attempt to use stage directions to bridge the gap between what is possible in a theater, and the grandiose panoramas that fill a movie screen. “Audiences,” he tells his readers, “are only able to understand what they are able to see or hear.”

Rush presents exercises and mini-assignments that can be completed by the individual reader or used in a group or classroom context. For example, he offers a set of characters and a situation and asks the reader to build a scene around them. He then, in a later chapter, refers back to the earlier exercise and suggests guidelines for the revision and refocusing of the scene. His exercises not only guide the new playwright, but some of them, such as making a list of 10 strategies a character might try to achieve a goal, can help the more advanced playwright deal with the dreaded “writers’ block.”

The author dissects texts, from familiar nursery rhymes to well-known plays, without ever losing our attention or his own enthusiasm. A major point in Rush’s system is the search for the “Agent of Action.” The agent of action is not always the same as the central character, as we learn by looking at the children’s rhyme “Humpty Dumpty” and Shakespeare’s play Othello. Humpty didn’t do anything but fall; it was the king’s horses and men who did all the work. Othello was simply swept along by a plot set in motion by agent of action, Iago.

The book’s view of script analysis makes it a worthwhile reference for student actors as well as for student playwrights.