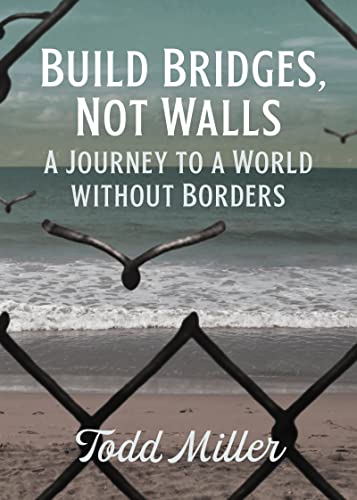 “will appeal to visionaries yearning for an end to man-made divides and the deliberate building of bridges of kindness and compassion.”

In this short book packed with information and inspiration, independent journalist Todd Miller makes a compelling case for removing border walls between countries. In 1989, when the Berlin Wall fell, there were 15 border walls around the world, he says. Today there are more than 70.

With a strong focus on former President Trump’s wall-building on the U.S.-Mexico border, Building Bridges, Not Walls shows how working people along the border have suffered “chronic forms of racial and economic injustice” from the barriers.  Miller calls for “abolitionist resistance through kindness” that stirs the natural inclinations of humans to be “empathic with one another” and change unjust laws.

Despite wide media coverage of Trump’s wall, most people are unaware of how much U.S. border and immigration enforcement budgets have grown in the past four decades, writes Miller. Under several presidents, including Trump, and spurred partly by the official response to 9/11 attacks, spending has increased by 6,000 percent. For the most part, the public has not been involved in budget legislation.

More than 650 miles of walls and barriers already existed on the border when the American public first heard about the wall during the 2016 presidential campaign. Along with the walls have come the surveillance cameras, the man-hunting radar, the drones, and other technologies aimed at tracking people.

Since 2003, agents have shot and killed nearly 100 people in the border zone.

“For years I have wondered what would happen if a group of people simply showed up at the wall with chain saws and just began taking it down,” writes Miller, who has covered border issues for more than 20 years. “After all, it is an impediment to connection, its very removal is the creation of a bridge.” By abolishing the wall, we might see “other possible futures waiting to bloom.”

Drawing on personal observations; interviews with border agents, activists, refugees, and others; and an array of writings, from government reports to books by scholars and visionaries, the author asks readers to imagine a future of open borders.

In a sense, he wants to build on the example of what actually happens among people living on immediate opposite sides of the border. “There is a long history of cross-border cooperation and mutual aid among the people,” he writes. “For example, fire units on both sides have crossed back and forth for decades in mutual assistance.”

As a former emergency services official in Arizona’s Santa Cruz County tells him, in describing the underlying sense of connection uniting communities on both sides of the divide: “We are not associates. We are not business partners. We are not even friends. We are family.”

Miller argues that same kind of empathy can be the basis for uniting all favoring open borders.

Citing the work of Australian philosopher Roman Krznaric, who extols the power of ideas to change society, he notes that “the ability to empathize is an innate sense, like sight or smell, and like a muscle, it strengthens with use.” By allowing human beings to see the world through other people’s eyes, empathy can be “a vehicle of great transformative power that leads ultimately to solidarity.”

Miller notes that the major religions all emphasize the positivity of empathy. Many Eastern practices encourage dissolving a sense of otherness through hospitality and kindness. All spiritual traditions “state quite clearly that not only should people have freedom of movement, but people should always offer hospitality to others, especially if they are in need.”

Contrast that with the thinking of a man infected with “wall sickness,” says Miller. “It is a binary worldview of us versus them, exceptional versus inferior, good versus bad, innocent versus criminal, legal versus illegal, either you think exactly like us or you are the enemy.”

Miller shows us how that worldview is embodied in a border agent who chastises members of a family conversing through a barred wall. The agent “began barking” at the group, he says.

“His exaggerated gesticulations bespoke a worldview that was enforced through him and also went beyond him, to the recruiting and training of the U.S. Border Patrol, to the spectacle of nationalism scripted into every Super Bowl broadcast, to the speeches of every U.S. president, Democrat or Republican, who has spoken of Manifest Destiny or American exceptionalism.”

“Indoctrination” on borders—through the political parties and mainstream media—impedes any serious discussion about their function, he writes.

At a time when governments and corporations anticipate an “increasingly destabilized” world due to mass migrations caused by climate change, Miller’s radical hope for a borderless world certainly faces steep odds. His book will appeal to visionaries yearning for an end to man-made divides and the deliberate building of bridges of kindness and compassion.