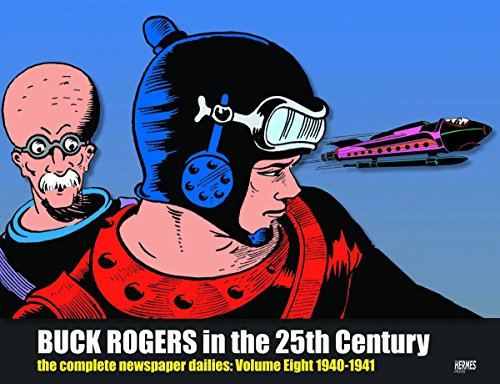 “. . . exemplify[ies] the universal appeal that marks the heart of science fiction.”

From Star Wars to Star Trek and over to Dr. Who, modern popular science fiction owes a big debt to Buck Rogers. This latest volume in the complete reprinting of Buck’s original newspaper appearances is a perfect reminder why. Collecting the daily newspaper strips that ran from the years 1940–1941, Hermes Press reminds us all of how deep that debt is.

The strips found in this new volume covers the years 1904–1941. These are the years leading up to America’s entry into World War II, and the work doesn’t shy from that fact.

For those who have never read the series and wonder why the character is so important to the world of science fiction and modern entertainment in general, this is the perfect place to jump on board. Historian and collector Allen Lane provides a solid introduction to the world of the 25th century in his introduction. He places Buck and his crew firmly in the modern world while also acknowledging narrative inconsistencies and the changing tone of the strip and character over various mediums as the years progress.

Above all, the strip was about adventure. The battles are glorious and detailed, and the nobility of Buck’s heroic worth is never in question. He is insightful in preparation for a war and quick to defend those who are oppressed.
Just like America was in the pre-war years.

His origin stemmed from a then-evolving tradition of pulps and early science fiction. In the same way that Edgar Rice Burroughs’ John Carter of Mars fell asleep in a cave and found himself alive on another planet, Buck Rogers was trapped in a collapsed mine. Only Buck’s origin is a bit more logical. Due to gasses in the mine he goes into suspended animation only to wake up 500 years in the future.

Matching Buck in her fame and skill is Colonel Wilma Deering. When she first appeared she flew into action with her pistol drawn, ready to fight as needed. Over the years she would change a little, eventually disappearing from the strip around the end of 1947, but in the period covered in this volume, she is an inspiration.

This volume contains three never-before reprinted stories in the newspaper canon. The first, Forgotten Earth Colony, tells the story of a group of hunters who left earth on the first documented rocket ship. An event that amazingly took place on June 15, 1942!

The second story is over 120 pages. That’s nearly a year of dailies. Titled Thrown Back 500 Years the story sees Buck return to the present day. Compared to much of the sci-fi work of today the tone of the strip is a bit lighter but absolutely packed with adventure and action.

Along the way Buck takes the liberty of introducing the first 25th century weapon ever used in a 20th century conflict. The Reducto-gun is capable of shrinking anything to one-fifth of its original size.

Over the course of the story he meets a young kid named Hemingway Jones. His friends call him “Jellybeans” which Buck immediately shortens to “Beans.” And let’s just say that one of the villains bears more than a passing resemblance to Adolph Hitler.

Touches such as these may have once appeared trite but with the passage of time they reflect a simpler narrative and a more trusting nature in the audience. All of which is part of the fun in reading this collection.

The third complete story returns Buck to the 25th century. In Goddess of Stygia it seems that Plan X, the last possible line of defense, has failed and the dream of universal peace has been shattered.

The reprint series is as complete as possible. They even include the small panels at the end of occasional dailies that include messages for the group of fans known as Solarscouts or Rocket Rangers. Like many popular strips, Buck Rogers had a fan club and the syndicate would send out special messages to fans that were willing to part with a valuable dime.

The character debuted in a 1928 novel by Phillip Nowlan. He then made the jump into pulps with a 1929 appearance in Amazing Stories. But it is in newspaper daily comic strips that the reputation of the character was cemented. That popularity led to serials, radio and even a television series in the late seventies.

Seeing possibilities, writer Phillip Nowlan and the Syndicate contracted artist Dick Calkins to bring the strip to life. The strip debuted on January 7, 1929, the very same day that the Tarzan newspaper strip made its first appearance.

By the time the strips in this volume appeared, Mr. Nowlan and Mr. Calkins had been working together for over a decade. They are in full swing here as the stories are packed with detail and adrenaline.

Take special note of his name at the top of the strip where he is credited as Lt. Dick Calkins. While he probably had the assistance of ghost artists, his style is a big part of the reason the strip works. His pencil lines can occasionally be bulky, but they are thrilling.

With the possible exception of Neil Armstrong, Buck Rogers may be the most influential spaceman of all time. This collection of classic strips serves to reinforce that notion. A great gift for Grandpa and his grandchildren, this work crosses generations and time to exemplify the universal appeal that marks the heart of science fiction.