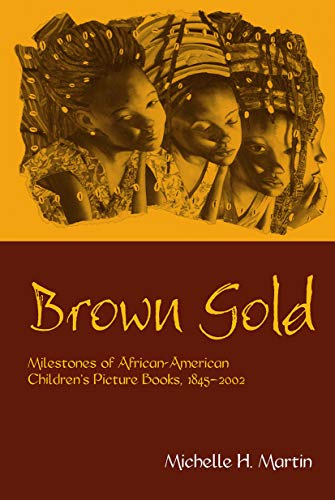 Historians have been known to uncover some pretty amazing things, and Michelle H. Martin, author of Brown Gold: Milestones of African-American Children’s Picture Books, 1845–2002 has done just that.

Ms. Martin reveals some of the earliest picture books on record that depict dark-skinned, kinky-haired, red-lipped African American children in educational roles that were humorous and entertaining to everybody except African Americans.

There is the unfortunate Black-a-moor (from The Story of the Inky Boys) who was “always barely clothed and always drawn in an outdoor setting, implying that he not only belonged outside, he had no permanent shelter.” And there was the infamous Sambo from The Story of Little Black Sambo, who, though he fought back when he was attacked by white ruffians, clearly depicted the white mindset about African Americans children during the early years.

As if those early images are not disturbing enough, Ms. Martin uncovers shocking concept books like The Ten Little Niggers and A Coon Alphabet, which depicted black children as crude, cruel, and apelike in physique and behavior.

The Ten Little Niggers involved the violent decrease, or “elimination,” of African American children—from ten to only one—by tragic means like choking, being chopped in half, dying in one’s sleep, and even frying in the sun. The Coon Alphabet, an ABC book (abecedary), depicted wild-eyed, dark-skinned characters with maniacal faces who got themselves into all sorts of trouble, sometimes even killing themselves off.

The good news is that Ms. Martin also presents those early writers who courageously fought to counteract this harsh racism against African American children and black people as a whole. These writers (W. E. B. Du Bois, Augustus Granville Dill, and Jessie Fauset) produced a wonderful magazine that was almost a century ahead of its time: The Brownies’ Book Magazine (1920–21). It was, among other things, created to “make colored children realize that being colored is a normal and beautiful thing, to make them familiar with the history and achievement of their race, and to turn their little hurts and resentments into emulation, ambition, and love of their own homes and families.”

As for recommendations, it should be noted that Brown Gold is not a book for the faint at heart. Ms. Martin does write with a conversational flare; however, her sentences are as academic and complex as the book’s entire premise and may prove quite difficult for the typical reader.

The material is riddled with racial slurs, hurtful pencil sketches, shocking caricatures, and enough needlessly cruel material to overwhelm even the most avid reader. Therefore, this book would probably be best enjoyed by college or post-graduate students who are interested in the history of picture books, African American history, the intricacies of race and culture, or social mindsets of certain time period.