The Broken Constitution: Lincoln, Slavery, and the Refounding of America 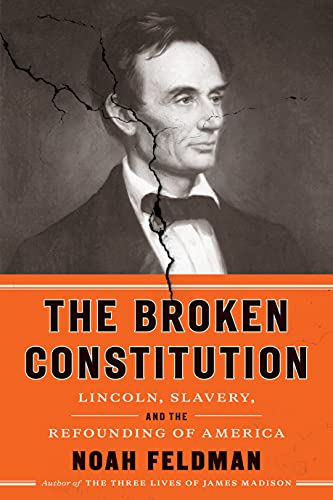 Among the literally thousands of publications whose primary subject is Abraham Lincoln, there have been some previously that have dealt with his presidential relationship relative to the Constitution and whether or not he may have violated same in his pursuit of saving the Union and, ultimately, emancipating the enslaved in the years from 1861–1865.

However, what author Noah Feldman has done with this book is to examine and compare Lincoln’s original perspective on what he characterizes as our initial “compromise constitution,” based on slavery’s inclusion, and how he came to break it through his interpretation of its wording and intent in order to accomplish the result of that which Feldman describes as a “moral constitution” via the postwar 13th, 14th and 15th, or civil rights amendments.

Feldman is a Professor of Law at Harvard University’s law school, columnist, podcaster, and author of ten books on other American political and historical subjects. Consequently, one must be forewarned that much of the text is law or legal-oriented, such that one must, at times, read carefully in order to understand the point that is being made.

The text is also history-oriented so, again, it would help the reader to be familiar with many facets of American history of that period, particularly where Lincoln’s decisions and actions are concerned. These are examined over the course of five rather lengthy chapters besides an introduction and conclusion. Fortunately, the chapters are broken into sections that allow for more facile analysis and consideration of each point made within the respective section.

The chapters include a description of the “compromise constitution” under which this country was founded, the rupture of the constitution by those states which seceded, the choice to go to war in the first place, political prisoners and the suspension of civil liberties and the writ of habeas corpus and, finally, emancipation and the morality inherent in establishing the “moral constitution” that resulted postwar and post-Lincoln’s assassination.

The problem in all of this, and is noted recurrently in the text by Feldman, is that Lincoln deliberately violated our so-called founding arrangements when it came to the power of the federal government to exercise any authority over slavery where it existed, to prevent a state from seceding or suspend civil liberties in an ostensible rebellion without Congressional approval. Lincoln is described by the author as having decisively broken all of these precedents.

Much of what Lincoln did may have eventually been ratified by Congress, yet he took it upon himself, at least initially when Congress was not in session, to make unilateral decisions and take those actions that he felt necessary in the circumstances—essentially, the Constitution be damned. One is left to wonder how all of this can be justified when Lincoln himself always considered the seceded states as never having left the Union in the first place.

Many of Lincoln’s actions can be seen as coming under the purview of his authority as commander-in-chief, yet that should hardly permit the suspension of habeas corpus where civilian courts are operating and abridgment of free speech and press rights in those states not considered in rebellion simply because one does not like a viewpoint or opinion.

The result of many of Lincoln’s actions, constitutional or not, is that we may now have a “moral constitution” that has not yet reached its full potential of social and racial justice, but has also provided presidents since then with much unilateral power, as well as given the country a behemoth and overarching federal government that can and does send its tendrils into every corner of our society, leaving us much its servants rather than the other way around.

Consequently, not all that Lincoln did has necessarily redounded to the benefit of or progress toward a “more perfect union,” notwithstanding our veneration of him as virtually our greatest president. The reader should ultimately keep this in mind, whatever one’s opinion of our 16th president.

Needless to say, one must read Feldman’s otherwise well written and researched account with a grain of salt and consider whether the benefits or advantages outweigh the damage done in terms of our society, and government, in the last 155 years.