The Brink: An Awakened Novel 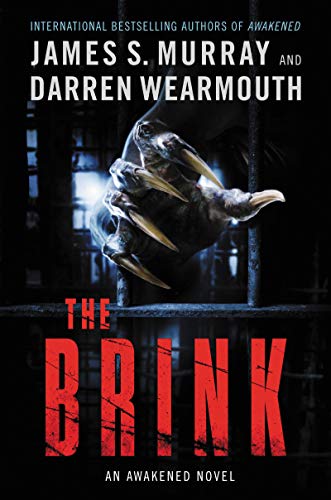 “A classic story of good versus evil, in which evil, though seemingly overcome, may simply lie dormant until it’s strong enough to strike from a different source.”

“There was a bond forged in the darkness below the earth, and their love—and more important, their respect—for each other was stronger than ever.”

Former New York City mayor Tom Cafferty and his wife Ellen may have survived the ordeal of fighting the creatures awakened by the opening of the new Z train, but now they’re facing something much worse.

Albert Van Hess, the man behind the Foundation for Human Advancement, is practicing an exaggerated form of extortion. He demands “protection money” from the governments of the world in exchange for preventing those monsters from destroying their cities.

Van Hess’ reason for doing this has a twisted logic. He wants to destroy the creatures and he expects countries to pay him to do it, but he also believes a good portion of the populace should die along with the monsters to purify the world.

To do this, he’s bio-engineering the creatures, making them controllable to do his bidding before he destroys them.

“Part of war is playing God with people’s lives, for better or for worse.”

Van Hess got this idea from his father, the man who could’ve saved Hitler, if the creatures found hidden away in the bunker hadn’t killed the Führer first. Failing, the elder Van Hess escaped alone and now, his son is trying to bring about his father’s dream of an ideal world.

Albert wants something more, revenge against the governments that destroyed his father’s dream. To do this, he’s determined to bring his enemies to their knees, currently holding former president Reynolds hostage and sending his men to abduct Ellen Cafferty.

Van Hess sees Tom as his chief adversary. Part of his revenge is to destroy everything Cafferty loves, as well as most of the world. Already, major cities in America have fallen, their citizens killed by bombs or by the creatures released by those same explosions.

London will be next. A thermonuclear device is buried three thousand feet under the city, set to be detonated at midnight if the money Van Hess is demanding isn’t paid, and most of the populace will die.

“He had directly threatened the United States.

He had kidnapped a president.

He had killed good men and women.

He had the creatures under his control.”

Tom Cafferty is faced with a choice. Watch his wife die or try to save the city, and there’s a good chance he’ll fail at both.

“The irony was not lost on him. From inside the gates of hell, he could be humanity’s savior.”

Those who’ve read Awakened, first entry in this series, will remember how career-driven Tom Cafferty was portrayed in that novel. Here, he’s a changed man, still to some extent driven, though for a different reason. Now reconciled with his wife, he’s allowing himself time to enjoy the love he shares with her, and the joy of their new son David, named for the good friend killed during the attack on the Z train.

A good portion of the book concentrates on Van Hess, telling in flashback of his father’s failure to save Hitler because of an attack by the creatures and of the son’s indoctrination into his father’s beliefs.

A caveat here: Some parts of this novel aren’t for the squeamish; when the monsters kill—and we’re talking human monsters as well as the subterranean ones—the authors don’t flinch from describing the acts, as well as the reaction of those forced to witness it.

This is a classic story of good versus evil, in which evil, though seemingly overcome, may simply lie dormant until it’s strong enough to strike from a different source.

There’s an irony in the story as well, for as Tom Cafferty fights against Van Hess, he unconsciously takes on the same intensity of purpose as his opponent. The question is then raised: Will Tom become another Van Hess in his attempts to rid the world of the subterranean terrors? Will he once again be a man obssessed only with obtaining a specific goal to the detriment of friends and family, or, in this case—the world?

Only time, and the third entry in the series, may tell.