Brilliant Blunders: From Darwin to Einstein—Colossal Mistakes by Great Scientists That Changed Our Understanding of Life and the Universe 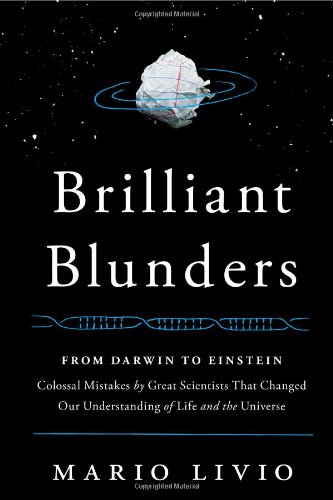 It is trite to say, but please do not judge this book by its cover: a photo of crumpled wad of notepaper with Saturn-like rings placed on a starry field.

While the title Brilliant Blunders is meant to get your attention, what’s inside is far less exaggerated and much more thoughtful.

Any reader might wonder: Just where is this showoff going? Dr. Livio does buckle down and get to the subject, although continuing to namedrop at a slower pace (Alfred Russell Wallace, Herbert Spencer, Thomas Malthus . . .).

By studying these scientists’ successes along with one blunder each and with the benefit of hindsight, we learn that things are not always what they seem.

All of the scientists are victims of incomplete knowledge and all unafraid of controversy.

Darwin is blamed for not knowing what is not yet known.

Linus Pauling didn’t fact-check in his hurry to publish.

Lord Kelvin and Hoyle were stubborn in the face of evidence to the contrary.

As for Einstein: He might have thought he was wrong, but, ahem, it turns out he might have been mistaken.

From its title Brilliant Blunders and in choosing Darwin as the first (to pick on), a reader might assume the author to overturn the idea of evolution. That is thankfully not the case (and if so would have lead to a different review).

Darwin’s blunder was in his lack of knowledge of genetics—something Darwin could not have known at the time of his writing On the Origin of Species. The author provides us the history of genetics beginning with Gregor Mendel, brings Darwin up to date, and . . . end of blunder. I felt so cheated (just kidding).

Mr. Livio notes an interesting possibility: As Mendel and Darwin were living at the same time there was a chance that Darwin read Mendel’s papers not realizing their importance. The author investigates and . . . [sorry, no no spoilers allowed].

Questions of the origin of life are unavoidably linked to questions of the age of the Earth; that is, the amount of time needed for life to evolve from random chemicals to the complexity of life cannot work if the Earth is relatively young, say on the order of a few million years. As an introduction to William Thomson, later Lord Kelvin, the author identifies various beliefs of mankind’s origin, something that for many cultures was left to theologians.

In the mid-1800s the discovery of fossils along with observations pointed to extremely slow-moving geological processes. This came into conflict with Western Judeo-Christian belief that the world was created in an instant on Saturday October 22, 4004 BCE, causing a few brave souls to question the Bible’s literalness—The Bible might be interpreted as allegory instead of the direct word of God.

Lord Kelvin’s great success was in estimating the age of the Earth by studying the problem from the perspective of science using thermodynamics. He estimated the Earth’s age by heat flow from its interior to its surface. There were, however, problems in his estimate given the many unknowns of the Earth’s geology. Lord Kelvin’s best estimate was off by a factor between 10 and 50, leading to his belief of a much younger Earth between 90 and 450 million years.

Today we more accurately estimate the age of the Earth at 4.5 billion years. His estimate, however short, was still very much longer than the 5,000 years given by the Bible, and just as important much shorter than infinity, a number assumed at the time by a number of scientists.

As to Lord Kelvin’s blunder, how could he be off by such a huge factor? The problem was with the assumptions going into his calculations, not in the calculations. Since no one in the Victorian era knew the exact geologic factors, there was a need to accommodate a greater measure of uncertainty, something that scientists today would call the need to “widen the error bars.”

Lord Kelvin’s genius was in transferring geochronology from religious ideology and vague speculation to the laws of physics. Kelvin’s calculations, even though wrong identified the true problem to be solved.

Lord Kelvin’s blunder was that he refused to admit that his assumptions could be wrong. His blunder was his stubbornness, something that was apparently part of his nature. As physics continued to advance Lord Kelvin became more reactionary and even obstructionist. He was famously quoted as saying, “X-rays will prove to be a hoax.”

It is also interesting to note that Lord Kelvin, who lived at the time of Darwin, did not believe in evolution. He believed that it would take a longer time for biology to evolve than his estimate of the age of the Earth, a scant 90 million years.

Instead he held to intelligent design, and the laws of thermodynamics to him were a sure sign of intelligent design. His strongest critic (from the side of science) turned out to be a formal pupil and assistant who revised the bounds of the estimate upwards to four billion years, very close to what we estimate today.

Mario Livio explores the concept of belief, including the feeling of knowing, the psychology of faith, the need to be right, and the difficulty in admitting errors.

He posits that people who consider “rationality above all” will still emotionally reject reason when reason comes into conflict with belief. Here a reader might recognize Lord Kelvin’s intransigence in the character of Sheldon in The Big Bang Theory and Philosophy edited by Dean A. Kowalski and previously reviewed here.

The next scientist profiled is Linus Pauling. One of Linus Pauling’s groundbreaking discoveries was the alpha helix, a three-dimensional model of the structure of many proteins. Readers will also gain a sense of the intense competition between scientists to be the first to publish.

After his success with the alpha helix, Pauling turned his attention to the structure of DNA. The depiction of the competition for discovery provides enough reversals and turns of events for an action-adventure movie. In the end though Pauling loses out to James D. Watson and Francis Crick, who get a Nobel Prize for their efforts.

Pauling’s blunder appears in retrospect to be hubris, being so sure of himself that he didn’t double-check his work. Considering that Linus Pauling has two Nobel Prizes in two different fields one might say, “You win a few, you lose a few.”

The next, Frederick Hoyle started out as a curiosity driven independent thinker who matured into a brilliant scientist. A leading figure in astrophysics and cosmology he was one of the main pillars of our understanding of stars’ evolution.

Hoyle was a coauthor of the landmark paper in 1957, “Synthesis of the Elements in Stars,” that showed how the second theory was correct. He used statistical mechanics to estimate the abundance of elements created in stellar interiors explaining how elements could be synthesized up to iron, while elements heavier than iron could only be created with the temperatures and pressures of supernovas, exploding stars.

The Big Bang theory presumes that somewhere back in time the universe was infinitely dense and infinitely small and exploded. This theory had cosmic expansion and cosmic background radiation (the echo of the big bang) going for it.

Hoyle’s blunder was in continuing to push for Steady State despite the accumulating evidence for the Big Bang. He simply did not believe the universe could be old enough for biology to emerge. In contrast, the Steady State theory gave the Universe infinite time for life to emerge. Ironically by opposing the “Big Bang” theory, Hoyle popularized the phrase “Big Bang.”

This isotropy and homogeny of the universe raises questions. Does the universe’s uniformity apply to time as well? Can the observed cosmic expansion fit into a context of an unchanging universe? These questions provide context for the introduction to Albert Einstein. We should all be familiar with one of Einstein’s successes, E=mc2, and his blunders might be assumed to be nonexistent. Yet . . .

Einstein in his equation for the static configuration of the universe used a cosmological constant—a repulsive force to balance gravity. If Einstein hadn’t used this constant he might have predicted an expanding universe a decade before Hubble. He eventually considered the cosmological constant to be superfluous and unjustified, abandoning it in 1931 and calling it his “biggest blunder.”

There is a question as to whether Einstein actually said, “biggest blunder”—Mario Livio investigates and . . . [sorry, no spoilers here].

There is also a question as to whether the cosmic constant is a blunder at all as it might have value in explaining a number of cosmic facts, including the age of the universe.

In 1998 it was discovered that the expansion of the universe was not slowing down but instead speeding up, implying not only that a repulsive force exists but also has been acting for the past six billion years. The cosmic constant also can be interpreted as the energy density of empty space. The vacuum of space is not empty but contains energy—how much is still an open issue.

A reader might entertain the notion that accusing scientific notables of blunders is a “MacGuffin:” a plot device to lead us off track and that Mario Livio really intends to walk his readers to great men and ideas through a conceit. Perhaps so but this reviewer was not deceived.

Wide ranging and entertaining, Brilliant Blunders might be picked up by readers who have been fooled into doing so by the notion of blunders, but they will certainly enjoy it for its brilliance.