Brilliance and Fire: A Biography of Diamonds 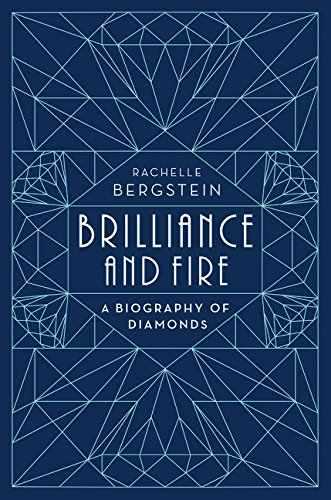 “This exhaustively and comprehensively researched book becomes more like a story rather than a lesson in the history of diamonds.”

Rachelle Bergstein is a writer and editor whose first book, Women from the Ankle Down: The Story of Shoes and How They Define Us.

Reading Brilliance and Fire was eye opening on multiple levels of enjoyment and acquired knowledge.

Brilliance and Fire turns out to be a most engaging story that focuses on diamonds, and yet the book provides a wealth of knowledge and information on so many other aspects of that particular gemstone. Expository writing can turn dry and pedantic with not much effort, but it is the skilled author that engages the reader and absorbs her into the subject matter.

The appeal of the book is as prismatic as a brilliant cut diamond. There is history of not only diamonds but of society as well geography, big business, and biographies of those who you may not have even known existed. To say that Bergstein has exposed the powers of spin and that of big business and how it affects us in our everyday lives is just a subtext to the main topic. The reader views the content as a spider’s web where the center is a diamond and from that point everything emanates to become everything you ever wanted to know about diamonds.

Little teases of what the reader can expect is that there was such a thing as a “DEAREST” ring which was made up of one of each of these stones: diamond, emerald, amethyst, ruby, another emerald, sapphire, and lastly topaz. Did you know that DeBeers is the single company that has controlled the flow of diamonds worldwide for over a century? Did you know that Harry Winston and Christian Dior were of similar temperament when it came to their creations since when Winston sold a sizable rock he pouted rather than celebrated, and Dior once he showed his collection he considered each piece like a child he had lost.

The reader might even be driven to reread this book in order to retain all the information. Bergstein has made her telling so inclusive by seguing from one story to another and always holding onto that common thread of diamonds. This exhaustively and comprehensively researched book becomes more like a story rather than a lesson in the history of diamonds.

Recommend it? You bet!