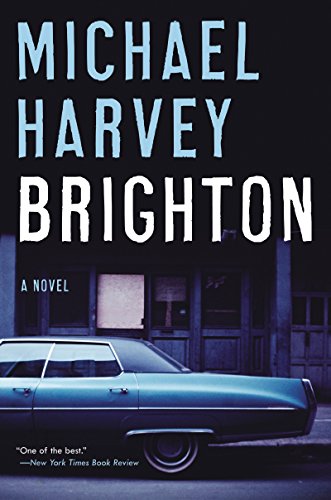 Brighton starts and ends in the Charles River. In the brisk, haunting prologue Kevin Pearce is “skipping rocks across the gray-green water and watching light dance along the skin of oil that floated on top.” And then slightly older Bobby Scales shows up, a burlap bag over his shoulder.

A few hundred pages later, we’re on a “spit of land just where the Charles River bent before making its final run into the harbor and infinite ocean beyond.”  Bobby watches as “swatches of light switched and played across the city’s skyline.”

By this point of this rugged, gritty novel, you may notice that you haven’t moved from your reading spot for many hours. You may have skipped a meal. Or two. The undertow to Brighton is powerful.

It’s really no wonder that the man behind the Boston-based film The Town, (based on a Chuck Hogan novel) has scooped up the film rights to Brighton. Cue Ben Affleck or some other well-chiseled star for the complex role of Kevin Pearce. Just make sure the actor knows how to swim; the Charles River isn’t here just for its oil-slicked surface alone.

The aforementioned three-page prologue takes place in 1971 but then Part One jumps ahead to 1975 to set up the incident (much too minor a term) that will haunt Kevin Pearce for decades to come.

Harvey rotates points of view with ease. There’s Kevin at 15 facing a pitcher from Charlestown. He has practiced picking up dirt around the batter’s box like “Pudge” (Red Sox catcher Carlton Fisk). Life is simple. His buddy Bobby is from a string of foster homes but now lives with Kevin’s grandmother. Bobby dropped out of high school and started driving cabs at 16.

Next there’s Katie Pearce, who once had hopes of crawling out of her neighborhood but who “slid back down the hill, back into the valley of soot and ash where she belonged, where they all waited with their eager, misshapen smiles and sharp, shining teeth.” She pours her yearning to leave into her only son, Kevin.

There’s Mary Burke, Kevin’s grandmother, who feels powerless to stop the waves of sadness and misery. Mary thinks Kevin has “special” written all over him but warns him it won’t be easy. “There might still come a time when the whole thing could tip one way or the other. And you won’t know which way to push.”

Harvey introduces Bridget and Colleen, Kevin’s two very different sisters, and keeps the focus of Part One (82 fast pages) weighed down by history and the bleak prospects being offered to those who grow up in the tough streets of Brighton. Bobby won’t talk with Kevin about getting out. “And so his future cut its own throat. And no one was there to raise a hand in protest. Or even an eyebrow to record its passing.”

If you’ve lived in Boston you know that some boundaries are sharply drawn. You might be on Jupiter but the other side of that park or that avenue might as well be Mars. Others, it’s more of a blur between Boston proper and the close-in neighbors. But if you grew up in one neighborhood (like Brighton) it might be exactly where you’ll die.

As far as Bobby is concerned, his future is pre-determined. But Kevin has hopes and looks over the immediate horizon—out and up. Can he make it? The pull of Brighton threatens to check Kevin Pearce’s yearnings, particularly when he finds himself smack in the middle of a crime, chasing and killing a man seen running after a robbery. Part One comes to a shuddering end with blood and Kevin needing a sink to clean up.

Can Kevin get clean? All the way clean? Part Two leaps ahead to 2002 and now Kevin Pearce is an investigate reporter at the Boston Globe, and he’s about to find out he’ll soon be named as a Pulitzer Prize winner—ironically, for a story about a crime that was investigated poorly and prosecuted worse. Part Two includes many new characters; Bobby Scales is a whole new version of his street-wise self and there’s Lisa Mignot, a prosecutor for the Suffolk County D.A., who just happens to be Kevin’s girlfriend.

Bobby has moved himself up in the underworld of numbers and rackets and becomes the suspect in a string of murders involving the shadier side of life. Kevin returns to a place where he never expected to wander again—surprising both himself and Bobby. Demons lurk and demons do what they do best.

The comparisons to Dennis Lehane, George Pelecanos, and Richard Price are all apt—and anyone who has read just one of Harvey’s earlier Chicago stories featuring P.I. Michael Kelly (The Chicago Way, The Fifth Floor, The Third Rail, etc.) will not be surprised at the taut architecture of Brighton or Kelly’s ability to pull it off. Brighton rocks along in snappy style played off against all things Boston, from the Red Sox to the Catholic Church, from the Boston Globe to that ever-present river. Racism and race relations seem to bubble up in every scene, and Harvey does a nifty job of pulling in the sexual predator scandal that rocked the Catholic Church.

The ending is a piece of pure tension and nail-biting. Harvey has kept us so focused on how the dominoes fall for Kevin Pearce and Bobby Scales that we overlook that others may be trying their own hand at controlling fate.

Brighton is a chilling tale. You’ll come up for air, at the end, shivering and in need of a drink.