The Bright Ages: A New History of Medieval Europe 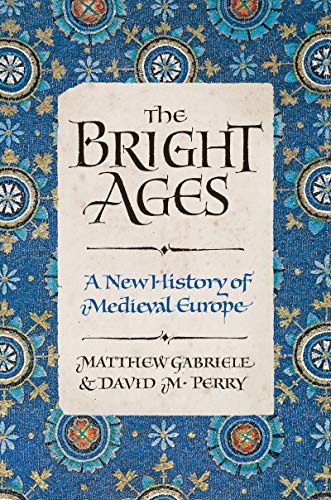 In The Bright Ages, two medieval historians try to recast in a positive light the period commonly known as “the Dark Ages.” It’s a laudable goal but one this overview doesn’t quite achieve. Although there are many good examples that could be employed to argue their case, they content themselves with a small circle, focusing on many women in a laudable attempt to redress conventional historical lack of attention on these important figures. This lopsided view would be more sustainable if major male figures, now equally forgotten, were also included.

One such strange lapse is Frederick II, Holy Roman Emperor, ruler of Germany, the Kingdom of Sicily (which doesn’t even merit a mention, strangely enough), and Jerusalem in the 1200s. Frederick would seem to be exactly the kind of personality who would interest these historians—speaking six languages with a court that promoted literature in the vernacular, paving the way for Dante’s writing (Dante makes the cut in this book even if Frederick II doesn’t).

Not only that, he included Jews and Muslims in his court and conquered Jerusalem not with military might, but through negotiations. His reasoned approach, being willing to talk with the Islamic Egyptian rulers of the holy city, was considered an act of treachery by the pope, who excommunicated Frederick for his pains. Just as important as his international effect, Frederick created a stable, modern, efficient bureaucracy, proving a true beacon of brightness in a period condemned as brutish and ignorant.

Anyone who knows the medieval period well, recognizes that there were plenty of bright spots and that it was the later Renaissance that recast the past as “dark” in order to emphasize their “new” light, the rebirth the humanists promoted of connecting directly to ancient thinkers and texts. This history is mentioned in the book in the pages on Petrarch but only discussed in detail toward the end. The introduction states:

“Later, throughout the eighteenth and nineteenth centuries, imperialist European powers and their intellectuals . . . sought a history for their new world order to justify and explain why whiteness—a modern idea, albeit with medieval roots—justified their domination of the world.”

This imposes a very contemporary interpretation on the history. “Whiteness” was certainly not a modern idea in the sense of one group of people asserting superiority over another. The stigma that Jews faced throughout the medieval world (including wearing yellow caps in France to identify them, a feature the Nazis borrowed for their yellow star) belies this claim. That Jews were literally locked into ghettos (Italy) or kicked out of countries (England and Spain) naturally gets no mention in this account that manages its own kind of “whitewashing” in an awkward attempt to be more inclusive.

“There were people who spoke different languages and ascribed to different religious traditions—or different versions of the same tradition. There were, for example, many Christianities and one catholic (with a small ‘c,’ meaning ‘universal’) church. But throughout Europe and the Mediterranean there were also Muslims, Jews, and polytheists. Every single one of these people loved and lusted and hated and befriended in all the ways that humans do, often enough, they wrote about their lives. Or made art, or left material traces unearthed after a millennium that we can still access today.”

This paragraph speaks to the book’s mission: to show these different traditions and how diverse the medieval world was, proving “brightness” that way. Well, yes and no. There was the period of “Convivencia” in Spain, a “coexistence” that was unusually tolerant and diverse, which merits a chapter here. And the Kingdom of Sicily, which doesn’t earn a place in these pages, showed a similar acceptance of diversity, marked by the Moorish architecture all over the island. But there were also religious wars, harsh oppression, and the Inquisition (no mention of that minor matter here). In other words, while there was much that was indeed bright in the medieval period, there was darkness as well, and a more careful history would admit that.

It’s churlish to criticize a book for what it doesn’t do, but the lapses here make for an incomplete, unconvincing picture. It’s laudable that there is a detailed chapter on Muhammad and the development of Islam, a major influence in the shaping of the medieval world. But why is the split between Shiia and Sunni not described, given that this happened soon after the death of the Prophet?

There are interesting chapters on the Franks and the Vikings, on Marie of France and her literary influence, but through it all runs the heavy-handed mission to prove that tolerance was more the norm than not. The book seems to have been written in reaction to contemporary politics rather than as a thoughtful history:

“But, again, the story told by extremists doesn’t have to be ours, because having unfolded the grounds for why this particular conflict happened when it did happen [the sack of Jerusalem in 1099], we can also see that coexistence was possible. We saw it before the eleventh century, through normalized diplomatic relations between Byzantine emperors or Viking warlords and Abbasid caliphs, even through the gift of a thundering elephant that made its way from Baghdad to Aachen. And even not long after the massacre that took place in Jerusalem. We’ll see a possible world open up for them again.”

There is indeed a bright world that happens before the Renaissance, but the book that successfully outlines that in a brief history has yet to be written.