A Brief History of Equality 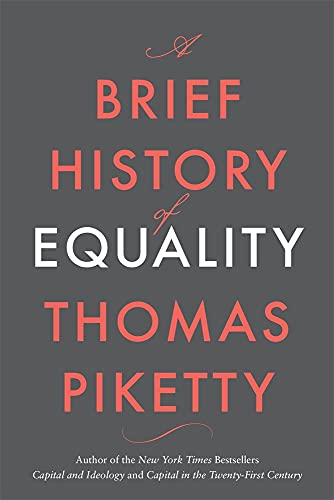 “interesting and insightful . . . a beacon of hope in our dark times”

For those daunted by Thomas Piketty’s previous 1000-page tomes, A Brief History of Equality allows the less ambitious reader the chance to read this brilliant economist’s thoughts. Piketty packs a lot into these 200 pages, each short chapter offering a mini-lesson in capitalism. Piketty is basically an optimist, asserting “there has been a long-term movement over the course of history toward more social, economic, and political history.” The book describes briefly these changes as well as offering concrete ways to continue this progression.

First of all, Piketty lays out the tools to create equality: “universal suffrage and parliamentary democracy; free and obligatory education; universal health insurance; progressive taxes on income, inheritance, and property; joint management and labor law; freedom of the press; international law; and so on.” He measures through charts how different countries rate on these indexes. Being French himself, there’s a preponderance of data from that country, but other countries are also scrutinized.

Particularly interesting and insightful is the history of wealth around the world. The chapter on the heritage of slavery and colonialism skillfully shows how Europe and the United States amassed incredible wealth at the expense of poorer people. Japan’s colonial history is not as clearly shown, but their expansion into Korea, Taiwan, Micronesia, and parts of China had similar effects. Most people probably don’t know that France controlled more slaves than the American south through their Caribbean colonies. When Haiti rebelled and took control of their own land, they were forced by the French to pay reparations to the ousted slave-owners. The high price tag financially crippled the young country for a century.

“For more than a century, from 1825 to 1950, the price that France tried to make Haiti pay for its freedom had one main consequence: the island’s development was overdetermined by the question of indemnity, which was sometimes violently denounced and sometimes accepted with resignation, according to the ebb and flow of endless political cycles.”

This leads Piketty to the question of reparations, what rich countries owe to those they colonized. He goes beyond theory and offers concrete proposals that could actually be implemented fairly if only the political will existed. He even dares tackle the broader underlying issues:

“For all that, it is very clear that reparations alone will not allow us to settle all the problems. To repair the damage done by racism and colonialism, we also have to change the economic system on a systematic basis, by reducing inequalities and ensuring that everyone has the most egalitarian access possible to education, employment, and property, independently of his or her origins.”

Turning from the past to the future, Piketty analyzes how climate change has been disproportionately caused by the wealthiest countries while heavily affecting the poorest. How can this be equalized? Even for this seemingly intractable problem, Piketty has solutions. It’s doubtful that they could actually be implemented but heartening to see them nevertheless:

“In theory, the solution is relatively simple. We have to replace the purely commercial and financial treaties that have up to now organized globalization with treaties that promote genuine, sustainable, and equitable codevelopment. The new types of treaties would set explicit, binding social and environmental goals, with quantified, verifiable targets. These targets would address, for example, tax rates for multinationals, the distribution of wealth, the volume of carbon emissions, and biodiversity. They would subordinate the pursuit of trade to the achievement of these objectives instead of making the former a precondition.”

Piketty’s clear thinking and his understanding of history and economics shine a bright beacon of hope in our dark times. This is book that deserves the widest possible readership. The more people who know about his ideas, the better our world will be.