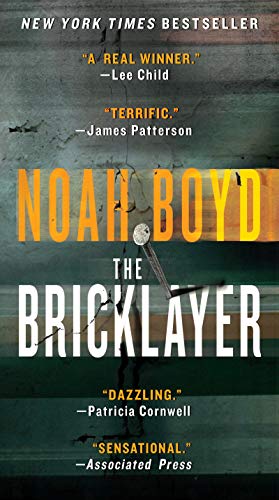 There’s a new sheriff in town, well, actually he’s a new hero created by a successful author of several action/mystery novels involving the FBI. Those novels behind him, Boyd now embarks on a journey down a different road to create a new series.

Noah Boyd is a pseudonym for a former FBI agent, who, during his twenty-year career chased bank robbers, fugitives, and serial killers in the Detroit Division. In The Bricklayer, he introduces the reader to a new protagonist, Steve Vail.

It’s not difficult to see the similarities between Boyd and his main character—they both distrust and avoid anyone in a leadership or supervisorial position. Boyd had a stellar career. He was instrumental in solving several high-profile cases, including working on the famous Green River Murders in Seattle, Washington. Despite his success, he incurred the wrath of FBI headquarters when he wrote a book critical of the Bureau. Facing suspension for his insubordination, he opted to retire and turned to writing full-time.

In his first endeavor as Noah Boyd, he has created a top-shelf thriller. The book begins with a bang; there’s enough action in the first 15 pages to entice those with an appetite for violence and mystery. The author sets the tone for the rest of the book, and gives us just enough of a look at former FBI agent Steve Vail to compel us to read on.

Vail is a complex character—he’s rugged, yet has a hidden, sensitive side he’s reluctant for others to see. He lives the life of a loner in Chicago, working by himself as a bricklayer, taking odd jobs and making just enough money to survive and pay the bills. He prefers no one get to know him well enough to get close to him, favoring the enigmatic to the open book. He’s educated, a Masters Degree in Soviet History, and he has a penchant for sculpting. He’s coasting along, seemingly content in his post-FBI life, until one day he’s visited by a newly promoted Deputy Assistant Director named Kate Bannon. She brings with her a personal offer from the Director of the FBI, one that involves Vail’s return to the Bureau—on his own terms.

Although most female agents, particularly female supervisory types, would generally be anathema to Vail, he listens to her pitch as she offers him a deal he can’t refuse. Tempting him with the promise of a complex investigation, one that may involve terrorists, rather than just her own gorgeous looks, Vail agrees to go back to work for the Bureau. She quickly reveals the details of a complex mystery involving extortion and murder that has Vail anxious to begin. One huge caveat: She and Vail must work together—as partners .

The initial pairing, Vail’s somewhat easy acquiescence to team with Bannon, seemed somewhat contrived. Would a hard-nosed, recalcitrant agent like Vail so quickly agree to those terms? Maybe; maybe not. Nevertheless, once the team is set, the drama begins, and I quickly overcame my skepticism.

The story employs numerous plots and twists, enough to keep the reader guessing. It’s fast paced and solidly written. Moreover, just when you think the investigation is winding down, bang, another bad guy emerges with yet another puzzle to ponder. The terminology is authentic . . . easily identifiable by anyone in the know, as “Bureau lingo.” Descriptions of weapons and explosive devices, investigative techniques, even the terms used to bad-mouth “the suits,” all ring true.

Boyd’s disdain for management is thematic, and without that element, I doubt the story would work. It makes for a unique read, one that makes the team of Vail and Bannon stand out from other crime-fighting duos. Add to the mix an underlying sexual attraction, and you have a recipe for a mouth-watering story.

I’ve learned the author has more in store for these two unlikely partners. The next book finds our reluctant hero visiting his old partner in Washington, D.C., on New Year’s Eve. And, as the old saying goes: “stuff happens.” During his visit, Kate is arrested for treason, a seven-year-old boy is kidnapped, and unbelievably, Steve Vail finds himself in the middle of it all.

I thoroughly enjoyed Boyd’s maiden voyage in The Bricklayer; I look forward to his next novel in the series.